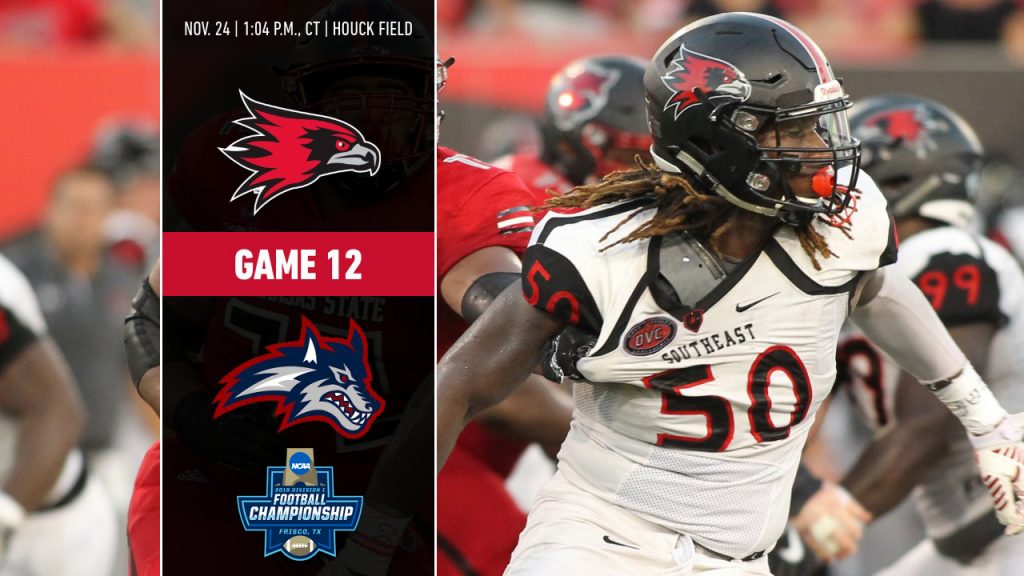 Season Recap: The Seawolves had a 7-4 season where they ran a tough gauntlet of CAA competition and emerged with a lot of quality wins and some tough losses.

After starting the season 3-1, Stony Brook showed they were going to be a force the rest of the way with a 29-27 win over then-13th ranked Villanova, rallying from a 21 point deficit to get the win.

Running through one of the toughest schedules in the CAA, the Seawolves ended 3-3, notably with some dominant wins (17-3 over fellow playoff participant Delaware) and some heartbreaking losses (a 13-10 defeat to James Madison).

Stony Brook seemed like they could have been in line for a possible seed, but then lost to their rivals Albany on the final day of the season, pushing them to 7-4 and sending them on the road on the 1st round instead.

Playoff Floor: The Seawolves have a long trip to Cape Girardeau, and if they suffer from any jet lag, their stay could definitely be short.

Playoff Ceiling: The Seawolves are a truly battle-tested team out of the CAA, and might be able to out-tough the Redhawks, and it’s not out of the realm of possibility they could gut their way through Weber State and beyond, too. If they do, conferencemate Maine could be looming.

Key Player This week: As important as the rushing game is to the Seawolves, the play of QB Joe Carbone seems to be what makes or breaks Stony Brook week to week. When he’s effectively passing off of an effective running game, getting touchdowns, Stony Brook is tough to beat. But when he struggles in the pass game and makes the Seawolves one-dimensional, they can be had.

Fantasy Bonus Baby This Week: RB Donald Liotine leads the CAA with 1,099 rushing yards on 204 carries and five touchdowns. He also recorded six 100-plus yard games this season, including four against CAA opponents. Though head coach Ray Priore will rotate his rushing with tht of RB Jordan Gowins, it could be Liotine’s performance that might make the difference if the Seawolves can come away with this.

Season Recap: Few people in the preseason had the Redhawks in their preseason FCS Playoff bracket. That’s because they knew SEMO would have to get out of the long shadow of OVC conferencemate Jacksonville State in order to do so.

In a stunning upset, the Redhawks would indeed do what many thought impossible: break Jacksonville State’s streak of 36 straight conference game victories with their dominating 37-14 win over the Gamecocks.

With the win over Jacksonville State, the Redhawks had the inside track to the OVC championship – but lost it in heartbreaking fashion.

With the ball and the lead, all SEMO had to do was kick off the ball and prevent a return for a touchdown. But in one of the most stunning events of the regular season, Malik Honeycutt of Murray State grabbed the ball and would not be denied the end zone, stunning SEMO 40-38 and handing the OVC title and FCS Playoff autobid to Jacksonville State.

It would have been a bitter pill to swallow had that singular play eliminated SEMO from the FCS playoffs, but fortunately the Redhawks were one of the final teams that made the field as an at-large bid.

Playoff Floor: Physical Stony Brook will be a great test for the Redhawks – one that might be too great for them.

Playoff Ceiling: If they beat the Seawolves at home, they’ll be rewarded with a tough trip to Weber State, which is where their wondrous 2018 season would probably come to a close.

Key Player This Week: It’s going to be critical that SEMO’s defense be up to the task of withstanding the physical beating Stony Brook is likely to deliver, and that’s where LB Zach Hall and the defense need to be at their best. Hall leads a defense that ranks first nationally in turnover margin (+2.09/game), turnovers gained (31) and passes intercepted (21) entering the playoffs, and the junior tallied 150 tackles (13.6/game), which puts him second nationally and one off the SEMO school record.

Fantasy Bonus Baby This Week: The SEMO offense is built around OVC Offensive Player of the year RB Marquis Terry. Despite missing parts of three games this season, ranks fifth nationally in rushing touchdowns (14), 13th in total rushing yards (1,162), 14th in all-purpose yards (141.64/game), 15th in rushing (105.6 yards/game), 21st in scoring (8.2 points/game) and 26th in rushing yards/carry (6.21). In a September victory at Southern Illinois, he had 438 all-purpose yards (311 rushing yards, 114 kick return yards, 13 receiving yards) which is the most by any NCAA player (FBS, FCS, D2 or D3) in a game in 2018. His 311 rushing yards in that game rank third-most by a FCS player this season. Terry also added a 200-yard rushing game (in a win over Dayton) and capped the season with four 100-yard rushing performances in his final five outings. Basically, when he does well, the Redhawks do well. 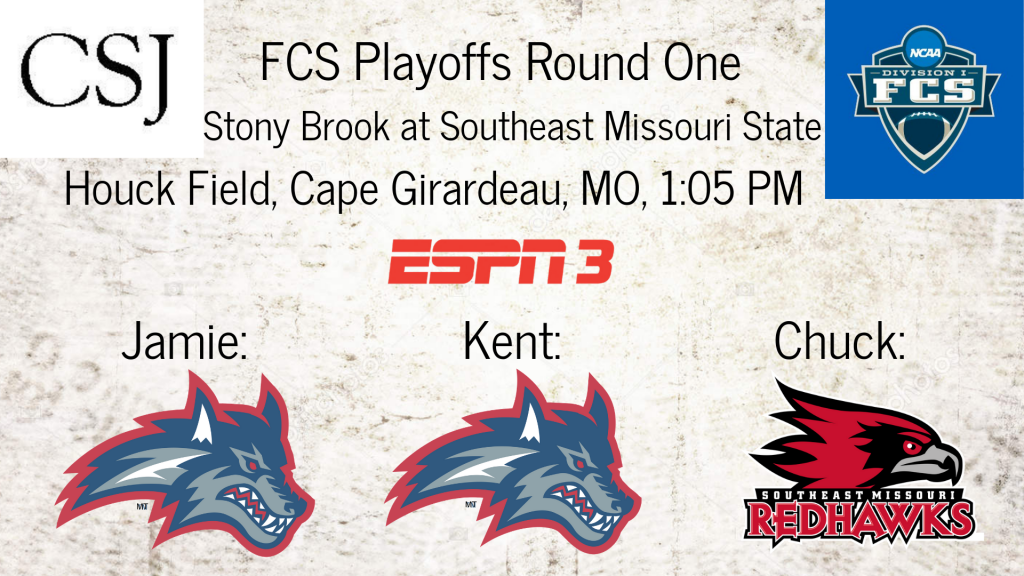 Jamie: SEMO has an explosive offense and Stony Brook will want to grind it out with the Long Island Express. THis looks like a close game all the way. Stony Brook 27, Southeast Missouri State 24

Kent: Stony Brook fell to rival Albany in the regular season finale and its reward is a trip to Missouri to face the Redhawks. This one is a bit of a toss-up game but look for Stony Brook to be the lone road team in the opening round to win. Stony Brook 33 Southeast Missouri State 27

Chuck: In what mental state will Stony Brook be after losing in just heartbreaking fashion to their 2-8 rival? The Redhawks enter this game in a much better place, and that, and home-field advantage, will be the difference. Southeast Missouri State 30, Stony Brook 20