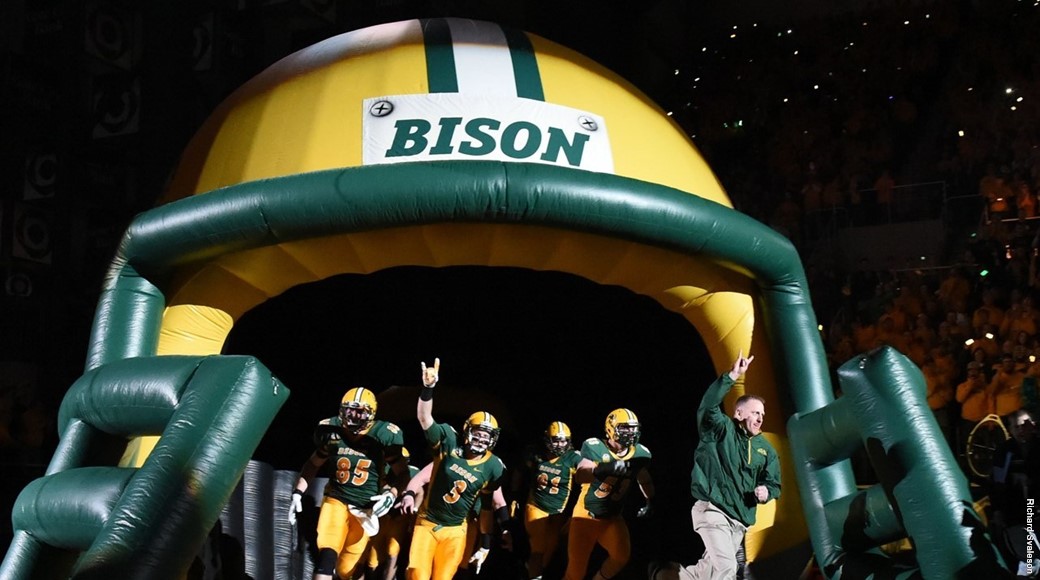 The highest ranked conference in all of FCS in the Missouri Valley Football Conference according to Sagarin enters the final week of the regular season with plenty to decide. NDSU and SDSU are currently tied atop the rankings. It is pretty simple to figure out the conference championship. NDSU wins the title outright with a SDSU loss and SDSU does the same with an NDSU loss. Should both lose and YSU win, we could see a three way tie and if both NDSU and SDSU win, we will have a two way tie.

SDSU has the tie breaker in the head-to-head meeting against NDSU. In the three way tie scenario, SDSU also has the tie-breaker as it defeated both NDSU and YSU.

All three title contenders will face road tests this week with the toughest looking to be SDSU’s game at UNI.

UNI, Illinois State, and Western Illinois are all hoping for a playoff bid. Getting six in is unrealistic but there is a chance that five MVFC teams make it.

NDSU will need to win also to maintain its top spot in the national ranking and to secure home-field advantage throughout the playoffs. SDSU with a win likely will get into the Top 8 mix as it sits at the #10 spot in latest committee rankings before the announcement at 11:00am EST on Sunday.

This will be the last of the rankings before the playoffs. I hope all have enjoyed these. As before, the ranking in parenthesis is last week’s rating.

This Week: at South Dakota

NDSU rose to the top spot of the latest FCS Playoff Committee rankings—assuming the committee took into account win over #2 ranked Eastern Washington as the determining cause to move the Bison up. This week the Bison hope to stay in the top spot in the national rankings and a win would secure at least a share of the MVFC title as well. is looking to claim at least a share of its sixth straight MVFC crown this week. NDSU won outright MVFC titles in 2012 and 2013. The Bison shared the 2011 title with UNI and the 2014 and 2015 crowns with Illinois State. North Dakota State has won 32 football conference championships including 26 in the North Central Conference (last in 1994) and one in the Great West (2006).

This Week: at Northern Iowa

Like NDSU, SDSU can get a share of the MVFC title with a win Saturday. The Jackrabbits would actually get the automatic bid virtue of its win in Fargo over NDSU earlier this season. But SDSU will face a tough road test in Cedar Falls this week. UNI is playing for what it thinks might be one of the last playoff at-large spots and a win over SDSU might just vault them to that position. With a win, SDSU will win a MVFC title for the first time in program history. The Jackrabbits also will be trying to match their best record in league play of 7-1, which was first accomplished in 2009. SDSU’s last conference title in football came in 2007, when it won the Great West championship.

This Week: at Missouri State

YSU mustered up enough offense to get by Southern Illinois last week. The win moved the Penguins to a perfect 6-0 at home. YSU is just 1-3 on the road thus far so they cannot look past Missouri State this week. A win in Springfield may not be needed to get a playoff spot but it will leave some doubts going into the postseason.

UNI’s win over Western Illinois on Saturday was its 80th win in program history over a top-25 program. It was also UNI’s 14th straight win in the month of November with Mark Farley holding a 49-8 record in November. The Panthers hope this winning late in the regular season will continue at home against SDSU this week. A win may not guarantee a spot but with UNI’s tough schedule, one would think if a six DI win school gets in, it will start with the Panthers.

The Redbirds have already finished their season. Now it is a waiting game to hope the right breaks happen to secure a third straight playoff bid. Folks in Normal will be routing for SIU and SDSU to win their games against WIU and UNI as this likely would bump Illinois State to one of the last playoff spots.

The Leathernecks looked prime for a playoff spot two weeks ago but now two straight home losses to Illinois State and Northern Iowa make this week’s game in Carbondale against Southern Illinois a must win. One good thing for WIU is that this game is on the road. The Leathernecks are currently 4-1 this year away from Hanson Field, the most road wins since the 2003 team won five(including a playoff game). The last time Western won five regular season road games came during the 2002 campaign.

Last Week: Lost to South Dakota State 28-21 on the road

This Week: vs. North Dakota State

USD is playing for pride and the hopes to do something no team has been able to do against NDSU—win two straight game against the Bison. Fans will remember that the Coyotes downed the Bison in Fargo last year 24-21 in one of the top FCS upsets of 2015. This year, USD has seemed to lose the close ones lately after winning the close one earlier. The Coyotes have followed a three-game winning streak with three consecutive losses, all of which were determined in the final minute. Eight of South Dakota’s last nine games were all decided within the game’s final 80 seconds and six were determined on the final play or second-to-last play of the game

Last Week: Lost to North Dakota State 41-17 on the road

The Sycamores couldn’t keep up with Bison last week to end their season. Senior wide receiver Robert Tonyan, Jr. fell one yard short of tying Terry Bell’s 2,048 career receiving yards for second place. Tonyan leaves ISU as one of its best receivers ever, ranking second in career receptions (150), third in yards (2,047), and the all-time leader in career touchdowns (20) as well as the single-season TD record holder (10) set this season.

Last Week: Lost to Illinois State 37-0 on the road

The Bears were manhandled last week in Normal. But MSU will have another chance to knock off a playoff hopeful in this final week when YSU comes into Springfield. The Bears, aside from last week’s loss, have been remarkably competitive. With YSU’s offensive wows this year, this game might send the Bears fans home happy.

Last Week: Lost to Youngstown State 21-14 on the road

While SIU has been losing most of its games this year, they are about to set a record. SIU’s single-season passing record should be broken this week. The Salukis have 3,210 passing yards this year, just 83yards shy of the program’s single-season passing record of 3,293 yards in 2007. In 2007, current head coach Nick Hill was the starting quarterback and became SIU’s first 3,000-yard passer. This year, starting quarterbacks Josh Straughan (2,429 yards) and Sam Straub (725 yards) have led the way.