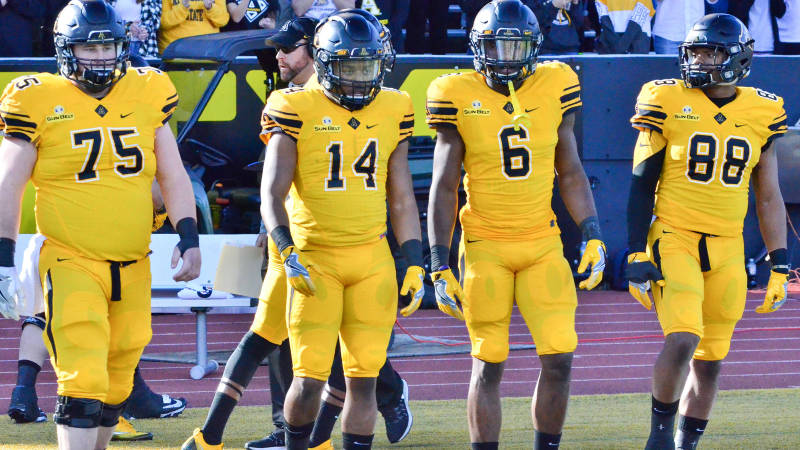 BOONE, N.C. — The last time Louisiana-Monroe coach Matt Viator showed up at Kidd Brewer Stadium, he and his team left Appalachian State with broken hearts.
As the Mountaineers (7-3 overall, 5-1 in the Sun Belt Conference) host Viator and Louisiana-Monroe on Saturday afternoon at 2:30 p.m., Appalachian is hoping this rising young coach won’t do it again.
In 2009, Viator brought his McNeese State Cowboys to Boone as ASU opened it newly renovated stadium. A late drive lifted the Cowboys to a thrilling 40-35 victory.
Saturday is senior day for App State, with 14 players making their final appearance at home and the Mountaineers (hope to keep their hopes for a share of the Sun Belt Conference title alive with a victory over the struggling, but improving Warhawks (4-6, 3-3).
“I have a lot of respect for Matt as a coach and what he is doing at Louisiana-Monroe,” ASU coach Scott Satterfield said. “People look at their record and think this isn’t a good team. But this is one of the most improved teams in our conference from the beginning of the season until now.”
The Warhawks dropped four games in a row after a season-opening win over Southern University, but have recovered to capture three of their past five games, including two straight Sun Belt victories over South Alabama in overtime and Georgia State this pat weekend.
“The key to the game is the same for both of us,” said Satterfield. “Being able to run the football and stopping the run.”
Among the players ending their home careers are tight end Barrett Burns, center Parker Collins, guard Jamie Collmar, tailback Marcus Cox, punter Bentley Critter, lineman Tyson Fernandez, linebackers Keenan Gilchrist, John Law and Toronto Thomas, safety Alex Gray, defensive ends Nate Norwood and Dezmin Reed, defensive tackle Darian Small and cornerback Mondo Williams.
It is a collection of seniors that has left its imprint on the Appalachian program almost as strongly as any class in school history.
This is the group that helped ease the Mountaineers from the Football Championship Subdivision into the Football Bowl Subdivision ranks as the program moved from the Southern Conference into the Sun Belt.
After Appalachian got off to a rough start for the first year and a half of their playing tenures, this core group of seniors were the impetus for a turnaround that has made the Mountaineers conference contenders and bowl participants in their first two years of full FBS membership.
“This went by so fast,” said a contemplative Cox at practice this week. “ It’s almost surreal. But even though it is our last game here, we are still taking it one week at a time.”
With that one-game-at-a-time mentality, these seniors have contributed mightily to the success of a squad that has won 24 of its past 29 games and 18 of its past 20 Sun Belt contests. The Mountaineers are 13-3 away from home during that stretch of two-and-a-half seasons.
“We grew up together,” Law said. “We learned that the small things are important.”
Coming off a heartbreaking loss to Troy last Saturday on the road, 28-24, when the Mountaineers were one play from victory, probably makes Saturday’s finale even more emotional for these steady seniors.
“We let a big game slip through our hands,” Cox admitted.
But Law said the team will try to keep the emotions in check on Saturday.
“Even more after losing that game, keeping the process the same is important.”
With Troy’s shocking 35-3 upset loss on Thursday night at home against Arkansas State, the Mountaineers can still win a share of the title if the Red Wolves (6-4, 6-0) lose to either Louisiana-Lafayette or Texas State in their final two road games.
Troy (8-2, 5-1), which earned the first-ever Associated Press top-25 ranking in conference history on Sunday, is also hoping to grab a piece of the title with an Arkansas State loss — though the Red Wolves have now won 15 consecutive Sun Belt games.
The Trojans finish the regular season at Texas State and Georgia Southern.
But Saturday will all be about Louisiana-Monroe for the Mountaineers.
“We’ve been through a lot since we’ve been here,” said Cox. “We stuck through it and brought (the program) along.”
The emotions were already hitting Critter, the strong-legged Appalachian kicker, who has helped his teams in many ways since his arrival in the home of his extended family.
One of the top kickoff specialists, punters and place holders in the country, Critcher even made two tackles last week against Troy — one which was reviewed to make sure he hadn’t committed a targeting violation that could have removed him from his final game at Kidd Brewer Stadium with a suspension.
Looking at his senior teammates, Critter said: “They have bled and sweated out here. It is going to be hard to walk out of here for the last time.”