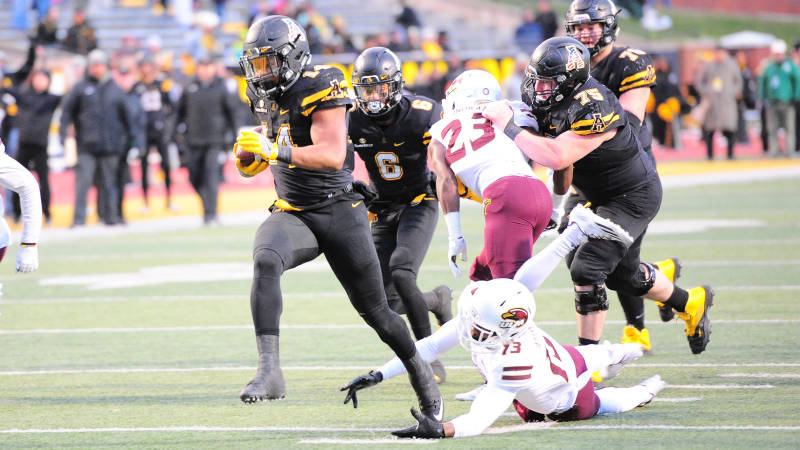 BOONE, N.C. — The wind was howling through Kidd Brewer Stadium, the temperature had plummeted from the 70s on Friday to near freezing by game-time Saturday afternoon and snow flurries danced through the air.

But for tailback Marcus Cox and the Appalachian State football team, senior day at the rock couldn’t have been much more perfect.

Cox ran 21 times for 153 yards and three touchdowns and smashed Kevin Richardson’s all-time school rushing record to guide the Mountaineers to a 42-17 Sun Belt Conference victory over Louisiana-Monroe before 18,699 fans at the Rock.

His final carry on this chilly afternoon resulted in a quick burst through the line on ASU’s bread-and-butter inside zone read play, with Cox scampering 25 yards into the end zone for the Mountaineers’ sixth and final touchdown of the day.

“I saw green grass and I knew I had to finish it off,” said Cox. “That is probably the best feeling ever.”

Nearly an hour after the game ended, Cox departed his post-game press conference and exited the athletic facility to find a young fan patiently awaiting his favorite Mountaineer player.

Still cradling the ball from his record-breaking run, Cox flashed his frequently displayed, broad smile and signed the back of the youngster’s t-shirt to the delight of a small crowd of onlookers.

“Everyone wants to be the best, but you don’t think it will happen,” said Cox, whose senior year was hampered by missing four and a half games with a quad injury. “It’s definitely been a long journey. It will always be a special day for me.”

It was the ideal end to an eventful afternoon.

After quarterback Taylor Lamb fired a 40-yard strike to Shaedon Meadors on the Mountaineers’ first offensive play, Cox churned for 16 yards and the first down on his first carry and then turned a forward pitch from Lamb into 19 more yards on an option run that was correctly ruled a pass reception.

On the next play, Cox crashed into the end zone from the one for his first touchdown and App State had a lead it would never relinquish just over five minutes into the game, on the way to its 429-yard rushing performance and 637 yards of total offense.

Lamb reached a milestone of his own later on in the first quarter when Ike Lewis raced behind the secondary to pluck the junior passer’s perfectly thrown aerial out of the sky for ASU’s second touchdown.

The 60th TD completion of Lamb’s career went for an appropriate 60 yards as he moved past legendary championship quarterback Richie Williams and into second-place in the Mountaineers’ record book behind Armanti Edwards (74 from 2006-09).

Lamb (14-of-22 passing for 208 yards and two TDs) added another scoring strike to senior tight end Barrett Burns from three yards out midway through the second period as Appalachian expanded its lead to 21-3 and tacked on a 35-yard option tally in the third period to make it 35-10.

With the Mountaineers (8-3 overall, 6-1 in conference) breaking out a formation that included Cox and Jalin Moore together in the same backfield, Lamb picked up 92 yards on only five carries, while Moore slashed the ULM defense for 135 yards with his 13 attempts.

“It’s something we’ve been talking about for a few years now,” ASU coach Scott Satterfield said of the strategic switch. “It was very effective for us.”

What little hope the Warhawks had of staying close had evaporated on Appalachian’s first drive of the second half when Cox dashed five yards across the goal line for another TD.

UL-Monroe running back Austin Vaughn piled up 110 yards against App State’s tough defensive front on 15 carries and scored on a nifty 16-yard burst in the third quarter, but it was the third and last scoring play of the afternoon for the Warhawks.

One long ULM drive was thwarted in the first quarter and the Warhawks (4-7, 3-4) had to settle for a 27-yard field goal from Craig Ford and a four-yard blast by quarterback Caleb Evans accounted for the only other Monroe TD in the second stanza.

“I thought we ran the ball decently at times, but we had a few chances earlier in the game, ” first-year ULM coach Matt Viator said. “We just got too far behind.”

Defensively, inside linebacker Eric Boggs led the Mountaineers with nine tackles and one sack, while safety A.J. Howard intercepted a pass for the only turnover in the game.

But this game will long be remembered as the capstone of Cox’s remarkable Appalachian career.

“I remember Marcus coming in on his recruiting visit, talking to his family” ASU senior inside linebacker John Law reflected. “It’s a mark Marcus broke, but it’s a record for the (whole) team. I knew it meant a lot to him, but it meant a lot to us, too.”