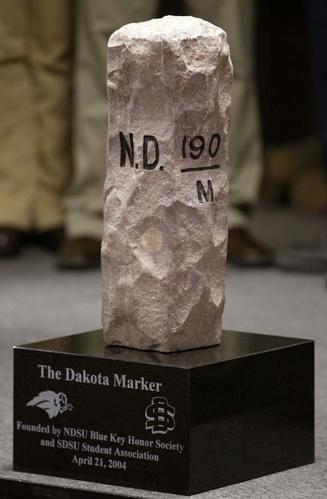 Here are the updated power rankings for the Missouri Valley Football Conference for the week ending Oct. 9th.

Last Week: Win over Missouri State 27-3 on the road

The Bison play SDSU this week in the Dakota Marker game, one that has been annually played since 2004. The trophy is a 75-pound model replica of the original quartzite monuments that were 7 feet tall and 10 inches square and placed at half-mile intervals along the border in the summers of 1891 and 1892. NDSU has won six straight Dakota Marker games and leads the series 8-4.

Last Week: Win over Southern Illinois 45-39 on the road

Jacks’ QB Taryn Christion has a career TD/Interception ratio of 6.75, with 27 touchdown passes and just four interceptions. This year, it’s 20:1. The best FCS ratio in the past 20 seasons was San Diego’s Josh Johnson (43 touchdowns and only 1 INT in 2007).

Lance Lenoir added to his season and career record total in the win over Indiana State. With 204 receiving yards, he tied the season record for most 200-yard games (Frisman Jackson) and most 200-yard games in acareer (Jackson, Lito Senatus), giving him 10 WIU records.

Last Week: Win over Illinois State 20-6 on the road

The Penguin offense found its groove late in the third quarter to aid the win at Illinois State. In the final 20 minutes of the game, YSU had 190 total yards after producing 175 the first 40. In the fourth quarter YSU had 139 total yards, 119 of which came on the ground with the lone 20 was on a touchdown pass from Ricky Davis to Alvin Bailey.

The Panthers early season downward spiral from the last three years seems to be continuing this year after the road loss at USD. UNI now will play a hot team in YSU. In those years, however, when you count the Panthers out, they seem to turn things around to make a playoff run. We will see if this year is similar with this road contest.

Coyote sophomore Tacari Carpenter entered Saturday’s game against UNI with five career catches for 58 yards including a touchdown. He had three catches for 109 yards and two scores in the win against UNI. He caught a 75-yard touchdown pass and broke two tackles during a 29-yard touchdown run that put USD in front 28-17 late in the third quarter. Carpenter is the second 100-yard receiver for the Coyotes in the last three games.

Senior WR Robert Tonyan Jr. became Indiana State’s all-time leader in receiving touchdowns in Saturday’s loss at No. 13 Western Illinois, and did so in truly entertaining fashion. Following a Western score to briefly take back the lead early in the second quarter, Tonyan was in the right place at the right time to haul in an errant Isaac Harker pass intended for WR Clayton Smith, which hit off two different people before Tonyan snagged it out of the air behind the secondary with 65 yards of daylight for his 16th career score. With the touchdown, Tonyan broke Joe Downing’s all-time record of 15.

Dylan Cole recorded a season-high 15 stops vs. North Dakota State as a highlight in the loss. It marked the 16th time in Cole’s MSU career he finished with at least 10 tackles in a contest, including his 10th such performance in the Bears’ last 12 games dating back to Oct. 10, 2015. He also registered his MVFC-leading third forced fumble, which is tied for third nationally.

This Week: vs. Illinois State

As a highlight in the loss to YSU, freshman James Robinson not only recorded the first 100-yard rushing performance of his career, but he also caught passes and returned kickoffs for the Redbirds against the Penguins. The Rockford, Illinois, native caught three passes for 50 yards and added 65 yards on three kickoff returns. Overall, he averaged 7.4 yards per carry and 21.6 yards per return in his first game as the primary back for the Redbirds.