The College Sports Journal staff thought it would be a good idea to get some perspective on the Weber St/James Madison game from the guys who covered them all year. In this roundtable, CSJ staffers Ben Schleiger and Jamie Williams give you a deeper look at the two teams.

Jamie -What is the status of Josh Davis? He seems like a tough dude who will give it a go, but if he cant go who is that next guy to look out for?

Ben -The SID at Weber said: “Josh was banged up. He left that game, then came back in and caught a touchdown, then left again. He has been practicing this week and they are hopeful he can go this Saturday.” So his ultimate status is still not totally clear.

At Weber, the backups are maybe not starters per se, but together they form a bruiser back combo. Weber State has seven running backs and one fullback to choose from, but they like Kevin Smith Jr. (Junior – 6′ 210lbs.) and Kris Jackson (RS Freshman – 5’10” 235lbs.). These thicker framed backs move the run game inside the tackles, but actually provides a safer game plan for Jake Constantine at quarterback since run up the middle and play action are the primary calls. 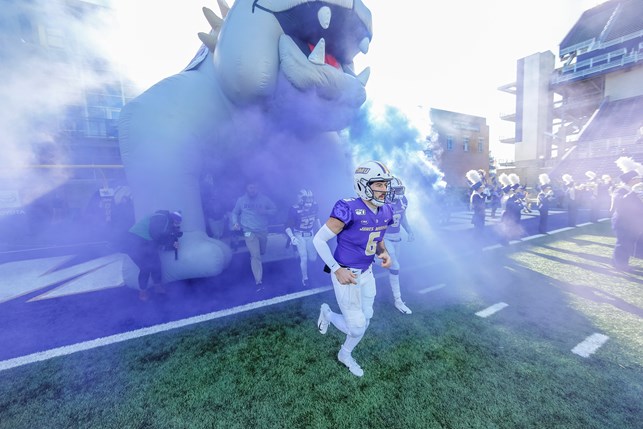 Ben – Who are the stars of the 1) Offense 2) Defense 3) Special teams that Weber should be afraid of?

Jamie – On offense, it all starts with DiNucci. He is much like a point guard in basketball. The ball is in his hands and he distributes the ball to his playmakers. If one of the playmakers isn’t open, he calls his own number, and does it well. Many times DiNucci has converted 3rd and 7-plus with his legs. Percy Agyei-Obese is the top back on the team. He eclipsed the 1000 yard mark last week and leads the team with 19 touchdowns. At receiver, Brandon Polk is also over 1000 yards. He transferred in from Penn State this year. He has the speed to take a 5 yard pass and turn it into a touchdown, something he has done multiple times, The best example was the first drive against Monmouth. He caught the ball with his back to the goal line, spun, split the defenders and took it the distance. Weber State wont soon forget about Riley Stapleton. In the quarterfinal matchup two years ago, he had eight catches for 189 yards including a 40 yard touchdown to set up the tying points.

On defense, the two ends have terrorized teams all year. John Daka and Ron’Dell Carter have combined for 28 sacks and 51.5 tackles for loss. At linebacker, Dimitri Holloway is a do everything linebacker. He plays the run as well as anyone in the country. But if need be he can drop into coverage. Holloway has over 100 tackles on the season and really announced his presence in the 2016 semifinal win over North Dakota State when he had 16 tackles.

On special teams, Weber has to beware of D’Angelo Amos in the return game. Amos has 5 career returns for touchdown and generally flips field position at least once per game. Kicker Ethan Ratke is the school’s all time leading scorer and is only a junior. The only kicker with more made field goals than him is his opponent this weekend, Trey Tuttle. Weber fans will remember Ratke as the guy who kicked the 46 yarder to eliminate them two years ago. Punter Harry O’Kelly is a JMU legend. The fan base loves the Aussie. O’Kelly averages 38 yards a kick and has only created two touchbacks while dropping 20 punts inside the 20.

Jamie -What type of quarterback is Jake Constantine? Can he put this offense on his back if need be?

Ben – Anyone who has read my articles knows I am overly critical of Jake Constantine over the majority of other Big Sky quarterbacks. There are so many talented receivers at Weber State and I do not believe they get used to their full potential as Constantine does not get them the ball as much as they deserve. Overall, Constantine is better than the other quarterbacks according to Coach Jay Hill’s decisions despite Kaden Jenks ability to fill in dutifully. Constantine is a pocket passer who does well on the short routes and play action but struggles with the deep ball.

Ben – Is the weakest player on the JMU offense DiNucci’s decision making?

Jamie – I don’t think so. If you asked me at the beginning of the year, that answer would have been a resounding yes. But throughout the year, DiNucci has proven to be the right quarterback for this offense and has limited the silly mistakes that plagued him (last week’s INT vs UNI notwithstanding.) To me the biggest struggle has been at the left tackle position. The Dukes have rotated a couple guys for the most part and overall they have played well. But if a defense has been able to collapse against the run or come up with a sack, its generally been from that left side.

Jamie – Who is the guy to watch on the Weber defense?

Ben – Honestly, there is a lot to be worried about in facing the Weber State defense. If you look at each position group there is a star player worth being worried about. For my preview, I featured Adam Rodriguez as he tied a school record in sacks and he is heating up at the perfect time. Overall, the most diverse, athletic, and fierce group in the Weber State defense is their linebacker crew. They are not only statistical leaders but also the first to the ball and to take down whoever has the ball.

Ben – On paper, the JMU defense looks scary, what’s their one weakness if any?

Jamie – As great as the defense has been, they have been susceptible to the big play early. Early in the year the secondary struggled, especially when Rashad Robinson was out. I can think of four games off the top of my head where the opponent had a big play on their first drive: Elon, William & Mary, New Hampshire and Monmouth. In each of those four games, the defense bounced back and put the clamps on. But this deep in the playoffs, early mistakes will be the type of thing that will send you home with a loss.

Jamie – What is the one matchup you see where Weber has an advantage that they can try to exploit?

Ben – I think the biggest advantage Weber State has is in their linebacker core. This group can cover the flats, takedown the running back, and hit the quarterback too. JMU has a high octane offense, but navigating past the linebackers will be a major consideration when drawing up any play to avoid loss of yards or turnovers.

Ben – JMU seemed to struggle against UNI as that was by far the best defense they had seen all year. Should the Dukes worry about the Big Sky’s best defense coming to Harrisonburg?

Jamie – JMU should be wary of any defense that can get into the back field and force turnovers. That is the exact defense that Weber will bring to Harrisonburg this weekend. Because of the overall speed of the Weber defense, especially at linebacker, Ben DiNucci will have to make the right reads in the RPO, something he has done extremely well all season. The Dukes cant get frustrated if they cant get any traction in the run game for a couple series. Much like against UNI, they need to keep pounding the ball and win the time of possession. But, UNI has a bit better defense than Weber, so JMU should be able to find more yardage. The weather this weekend should also be better, so look for DiNucci to put the ball in the air a little more.

Jamie – What is Weber’s biggest weakness?

Ben – Weber’s biggest weakness is the pass offense. Constantine really struggles in his touchdown to interception ratio. Currently, he has 13 touchdowns to 10 interceptions. The ability to get the ball to the receivers is essential, but are the possible turnovers worth it

Jamie – Weber seems to have one of the better special teams units in the country. Who are their main specialists to watch out for?

Ben – Trey Tuttle is one of the best kickers in the FCS. His accuracy is 82 percent for field goals, but his distance is at least 50 yards. In the return game, Rashid Shaheed uses his quick legs to get to full acceleration in a matter of seconds. Also noteworthy, JaKobe Harris basically sealed the game for the Wildcats against Montana as he blocked a punt from the Griz and scored a touchdown. 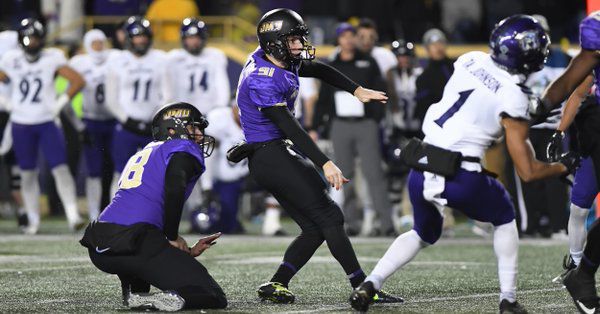 Ben – Ethan Ratke is the man who sunk Weber last time as a freshman, can he do it again if the try is 50+ yards? His season-long is 44 yards.

Jamie – I don’t think Ethan quite has that 50 yard range. 44-46 is about the depth of what he can do. Cignetti usually has chosen to go for it if the field goal attempt would be 45 or longer this year. But, if Ethan is called on to make a big kick, JMU nation has confidence he is going to knock it through.

Ben – There is always talk about who had a tougher road to the playoffs. Did JMU earn their way through or did they not play anyone worthy all conference long?

Jamie – The CAA really only had one elite team, JMU, but the rest of the conference was generally above average. Eleven of the twelve teams had at least five wins, and the one who didn’t, Rhode Island, played 5 games to within one score that they wound up losing. The Big Sky and Valley were clearly better conferences but the CAA wasn’t a doormat.

JMU played, according to Massey, the 14th toughest schedule. They handled the business in front of them. Their out of conference schedule was rightfully criticized. But I think their easy win over the #6 team in the final STATS poll put that to rest a bit.

Ben – Following up on that, tougher road to Harrisonburg: Weber’s season or JMU’s season?

Jamie – Weber State, no doubt. They played two FBS teams and UNI in non-conference play. Then they had to deal with the Big Sky powers. They proved they deserved that number three seed and were able to avenge their conference loss to Montana. The Wildcats are great at home.

Ben- Weber State will need a lot to go right, but a win is possible. The biggest step towards winning will be shutting down the line of scrimmage and providing pressure on DiNucci. If the run game is minimized and DiNucci gets rushed or even sacked that simplifies the gameplan to just worrying about the air raid. With enough pressure we could have a repeat of Ethan Ratke going for a second walk off or Trey Tuttle rewriting the script with a walk off field goal.

Jamie – If they do what they have done all year. Control the line of scrimmage on both sides of the ball and avoid the costly turnover. If the Dukes win the turnover battle, they will be virtually impossible to beat. They also need to keep DiNucci clean in the pocket to give him time to find his talented receiving corps. If they do that, James Madison and their fans can punch their ticket to Frisco.