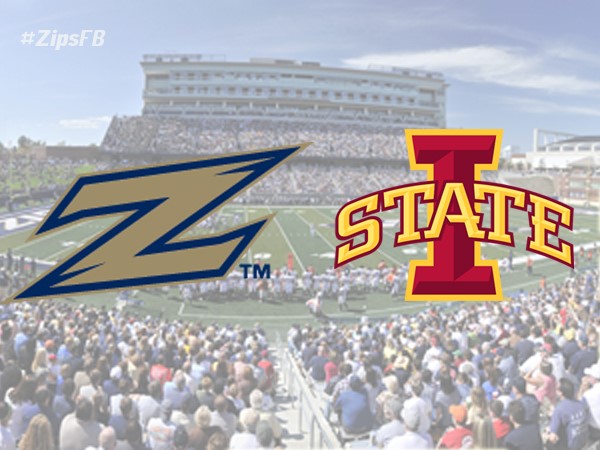 For the first time in Akron football’s FBS history, the Zips defeated a Big Ten opponent as Akron held on to a 39-34 victory over Northwestern on Saturday.

The Zips only managed to gain 123 yards of total offense in the first half, but the next 30 minutes proved to be the game changer.

Akron put up 213 yards of total offense alone in the third quarter and came back from a 21-6 deficient in the quarter.

This game is the second in the home-and-home series between these two teams with Iowa State winning in Akron 41-14. Last year’s game was the first ever between the two schools.

Key Player: LB Alvin Davis, Jr. took two interceptions for scores, to go along with his ten tackles and is the Zips team leader on defense. Currently, the Zips good rank as the MAC”s best, allowing just 323 yards per game. The defense will be key just as it was in the Northwestern game last week to keep this game close.

Fantasy Bonus Baby: QB Kato Nelson played in the fourth quarter of the game last season basically when the game was already in hand when Iowa State visited Akron. He went 2-for-4 with an interception in that game. But so far this season, he is much improved and it showed against Northwestern. He passed for 277 yards and two touchdowns. He also the led the Zips in rushing with 53 yards to get the get the upset. Expect Nelson to throw the ball in this game as Iowa State probably will creep out to a lead.

The Cyclones had its first game against FCS South Dakota State canceled due to lightning. And then ISU lost to rival Iowa and Big 12 strangle-holder Oklahoma in its first two games.

Both of those games were close so it is not like the old Iowa State days where those would have been blowouts.

ISU does need to up its turnover count, however, as the defense has so far forced just one, while the offense has given the ball away twice.

Key Player: RB David Montgomery has not produced as expected so far this season. As a team, Iowa State is sporting just a 53-yard rushing average, which is dead last in all of the Power Five Conferences. Look for the Cyclones to focus early and often on their star back as a key contributor to the offense.

Fantasy Bonus Baby: WR Hakeem Butler had a breakout game against Oklahoma, catching five passes for a career-high 174 yards to average a whopping 34.8 yards per reception. His 174 yards ties for the 10th-best single-game total in school history. Butler had TD catches of 51 and 57 yards to increase his career total of 50+ yard receptions to six (74, 67, 57, 57, 52, 51). His 26.1 yards per catch average this season ranks fourth nationally. This was despite playing with second string quarterback sophomore Zeb Noland, who started in place of an injured Kyle Kempt, and is expected to start again this week against Akron.

Fearless Prediction: The Cyclones have waited far longer than they ever expected to have to this season to pick up a win after going to the Liberty Bowl last year. Akron will still be on a high after beating a Big Ten team last week and will look for the sweep of the Big’s on their schedule. I think Iowa State will have the wake-up call and play its best game of the season and will be enough to put away the Zips but likely will be tighter than most expect. Iowa State 31, Akron 24