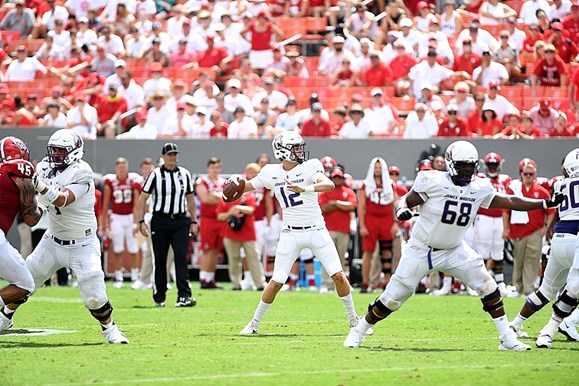 James Madison stayed with North Carolina State throughout the game on Saturday. In the end, the Dukes came up just a bit short, falling 24-13 in Raleigh. Playing a team of that caliber that close would be considered a moral victory for many FCS schools.

But for James Madison, the 3 time defending CAA Champions coming off of back to back National Title game appearances, they have an expectation to win every game, regardless of opponent.

Coach Mike Houston said that it “was a game of missed opportunities” on the weekly CAA Coaches Teleconference. Houston pointed tow “ a couple critical mistakes in the red zone” and “ a big mistake on a play in the fourth quarter that set State up for their last score.

In the red zone, the Dukes had the ball in goal to go situations on three separate occasions where they did not come away with a touchdown.

The Dukes settled for 2 field goals inside 20 yards and quarterback Ben DiNucci fumbled trying to do too much with a couple minutes left in the first half.

The big mistake in the fourth quarter was a result of the Dukes missing their top CB, Rashad Robinson who is out for the season after undergoing surgery for turf toe. On a third down play after the Dukes cut the Wolfpack lead to 17-13, two defensive backs bit on a fake bubble screen allowing Jacobi Myers to be wide open for a 39 yard conversion. A few plays later, the Wolfpack extended the lead to the final margin.

NC State quarterback Ryan Finley threw for 309 yards, 222 of which came in the first half while building a 17-7 halftime lead. The Dukes made some halftime adjustments, holding Finley to only 87 yards through the air in the second half, but the comeback bid came up just short.

The Dukes opened the scoring with 3:41 left in the first quarter on a 5 yard pass from Ben DiNucci to Riley Stapleton in the left corner of the end zone. Stapleton led the JMU receiving corps with 9 catches for 88 yards.

In the second quarter, the Wolfpack roared back scoring 17 unanswered points to take a 17-7 half time lead. The turning point came on DiNucci’s fumble. On a 3rd and goal play, DiNucci tried to change course and throw a pass into the end zone. His pass went awry and fumbled with an empty hand that was recovered by NC State. The Wolfpack then marched the down the field to take the 10 point lead into half time.

The entire summer for James Madison fans was spent wondering who would be the team’s starter to replace Bryan Schor. The answer was provided by Coach Houston on Friday night, and it would be Ben DiNucci. Throughout the game DiNucci made the most of his opportunity and played very well. He hit his first 15 passes and finished 23-27 for 194 yards and the touchdown. On the ground, DiNucci added 79 yards on 14 carries.

On defense the Dukes were already slated to break in 9 new starters from the 2017 team. It was announced that Robinson was out for the season and DE Darrious Carter was suspended for the game leaving just one remaining starter, CB Jimmy Moreland.

Working in all the new starters against an offense of the caliber of the NC State Wolfpack, the Dukes afforded themselves very well. The Dukes defense a was led in tackles by Junior Safety Adam Smith. Other top defensive performers were LBs Dimitri Holloway returning from injury and freshman KeShaun Moore. The defensive line was anchored by Ron Dell Carter and John Daka.

The Dukes wont take a moral victory from this game, but they proved they are well seated as the #2 team in the FCS and a force to be reckoned with in the 2018 season. The Dukes start their FCS slate this weekend against Norfolk State, who they defeated 75-14 in 2017.