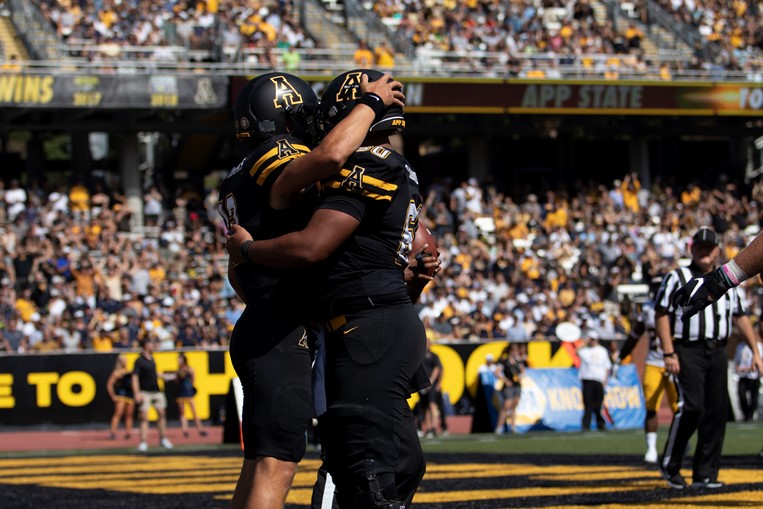 He stopped mid-sentence at the start of his postgame press conference to finish devouring a Snickers ice cream bar and broke into a wide smile.

“When you win, it’s a lot of fun,” Drinkwitz said. “It isn’t easy winning a college football game. Obviously, we got off to a slow start. There’s a lot of things we’ve got to do better.”

Appalachian played well enough defensively to keep Drinkwitz from feeling too many nerves.

The Mountaineers took a 14-0 halftime advantage into halftime and still led just 21-7 until the final minute of the third quarter. But eventually the tremendous depth of ASU and those 22 extra scholarships the Mountaineers held as a Football Bowl Subdivision team took their toll on the spirited Buccaneers, who look to be even better than the 2018 unit that shared the SoCon title with Wofford and Furman and advanced to the FCS playoffs for the first time since 1996.

It was ETSU’s first game against the Mountaineers and first trip to Boone since the Bucs dropped football after the 2003 campaign and reestablished the program in 2012.

On a day where Appalachian honored College Football Hall of Fame coach Jerry Moore and 2004 Walter Payton Award finalist DaVon Fowlkes (the former FCS All-American receiver and kick returner was inducted into the App State Athletic Hall of Fame) and current players were watched closely by a large contingent of Mountaineer football alumni, Drinkwitz and his team were definitely under the microscope and eventually they passed their first test in what could be a special season.

Is a New Year’s Day bowl appearance out of the question for an Appalachian squad that could prove to be the best team among the Group of Five conferences?

That is a question that will be answered over the next 11 games, but with this top-flight defense and an offense that is filled with playmakers, the expectations are as high as they ever have been in the High Country.

“Our offense is about getting the playmakers the ball,” Drinkwitz said. “FTS, Feed the Studs as we like to say.”

The Mountaineers did that well enough to score touchdowns on all six trips into the red zone on Saturday, led by strong performances from a trio of juniors, receiver Thomas Hennigan (career-high seven catches for 79 yards and one brilliant 31-yard touchdown), tailback Darrynton Evans (14 carries for 99 yards and one score) and quarterback Zac Thomas (16-of-24 passing for 150 yards and two TDs, five rushes for 32 yards and one score).

Even with the slow start, Appalachian accumulated 444 yards of total offense, including 283 yards and a 6.8 rushing average on the ground.

“This speaks volumes of how hard we have worked,” said Hennigan. “We’ve worked hard for eight months. That’s when you win football games, in the spring, not the fall.” The Bucs made it difficult for a talented Mountaineer offense to move the ball down the field in the first half and trailed only 14-0 at the break. It could have been closer if not for a pair of questionable officiating calls that all FCS teams seem to get on the road at FBS venues. A pass interference call, that could have been offensive pass interference on Hennigan, set up Appalachian’s second TD midway through the second quarter. Thomas hit Malik Williams cutting across the field on a waggle play on the next snap for the TD.

A key holding call on the ETSU offense late in the half cost the Bucs a chance to possibly make it 14-7 at the intermission.

“Well we played with them for a while and that’s good, but we have to play with them for 60 minutes and finish the deal,” ETSU coach Randy Sanders said. “I thought we had some guys play awful hard.”

On offense, ETSU freshman QB Trey Mitchell came off the bench and was 11-of-15 at one point for 112 yards and a touchdown (he finished 12-of-19 for 117 yards) and Quay Holmes had a solid game rushing with 68 yards on 19 attempts. The Bucs also did a nice job in limiting Appalachian’s time of possession until late in the game. The defense put some good pressure on ASU QB Zac Thomas and kept the Mountaineers in a lot of third-down situations.

“They are a very good offense,” Sanders said of the talented Mountaineers. “We felt like if we could come out and get a stop beginning the second half and go down and score, then we were going to be in for a heck of a ballgame. You got to give them credit — they converted some big third downs and had an unbelievable catch on a slant on third and short that was covered. It was a good defensive play but just a great offensive play.”

“That’s a good football team in my opinion,” said Thomas, who had a pair of bone-rattling hits among his five tackles. “They were coached very well and they played really hard.”

“The defense competed, the defense battled and the offense did a lot of good things but not nearly enough good things.”