This year, Eastern Washington finally got back to Frisco. The Eagles were actually the first national champions crowned in the Dallas metroplex area back in January 2011 when it was awarded to host the game. The Eagles are in the Top 3 this decade in terms of wins within the Division I FCS but playoff losses—ironically all at home have kept the Eagles from the trip since.

Eastern Washington has a history with its opponent of North Dakota State. The Eagles knocked the Bison off in the quarter-final playoff round in 2010 and the two met in the regular season contests in 2016 and 2017 with the Bison taking both contests.

Over this decade, Eastern Washington has been the best team from for the Big Sky Conference. The Eagles have claimed five league titles and advanced to the FCS playoffs six times in the last eight seasons. Eastern played its fifth semifinal game all played in Cheney but this year was just its second semi-final win.

EWU lost 45-42 to Sam Houston State in the 2012 semifinals. The Eagles lost 35-31 to Towson in the semis of the 2013 playoffs. And possibly the most heartbreaking of EWU’s Final Four defeats came in the 2016 playoffs with a 38-36 loss to Youngstown State.

We’ll review how the Eagles come into this game with a 12-2 record and some the factors and reasons that they are playing again in Frisco at Toyota Stadium this year.

How were the Eagles viewed in the preseason?

I felt that EWU would likely be right in the contention again for another Big Sky Conference title. I felt they would be just short of Weber State and finish second in the league.

As for the preseason media poll, EWU was tabbed as the favorite. 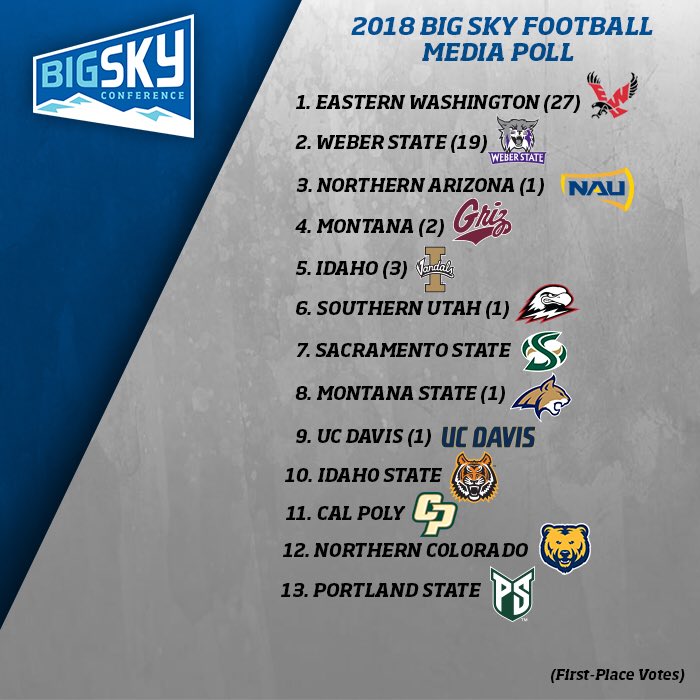 How did the Eagles finish 9-2 within the 2018 regular season?

Eastern Washington finished tied with Weber State and UC Davis for the Big Sky Crown. Weber State actually got the automatic bid, however, by virtue of its regular season win over the Eagles.

The Eagles started the season with an easy home win over DII in-state foe Central Washington 58-13.

Then the Eagles faced Big Sky foe Northern Arizona on the road (although the game did not count in the Big Sky standings). The Eagles built an early lead and withheld a NAU comeback in the fourth quarter for a 31-26 win.

Next, the Eagles faced FBS in-state rival Washington State. Eastern trailed early in the game and were down 28-3 into the second quarter. EWU did come back late in the second and third quarters to close the gap to 11 points but WSU scored 24 in the final quarter for the 59-24 blowout.

Eastern would win its next three games to begin Big Sky play in blowout fashion with easy wins over Cal Poly, Montana State, and Southern Utah. The Eagles won these three games by a combined 159-51. The win over Montana State, however, was a costly one. The Eagles lost All-American quarterback Gage Gubrud, who suffered a season-ending toe injury.

In the SUU game, sophomore Eric Barriere got his second ever start and led the Eagles the 12th-most yards in school history with 648 and equaled the 23rd-most points all-time. Eastern had 380 yards rushing and 268 passing, and averaged 9.4 yards per play.

The next week was a different story, however, in Barriere’s next start against Weber State on the road. The Wildcats defense limited the Eagles to just 247 yards, and for the first time since a 19-3 loss to Montana in 2008, the Eagles did not score a touchdown in a 14-6 loss.

That would be the last loss for the Eagles as EWU went 4-0 to end the season with easy wins over Northern Colorado, Idaho, Portland State, and tri-champion UC Davis. The UC Davis likely was the most impressive as it won 59-20 where the Eagles out-gaining the Aggies 669-395 in total offense and EWU score 59 of last 69 points to hand UCD its first and only league loss.

With the Big Sky tri-championship, Eastern Washington received the #3 seed in the FCS playoffs.

How did Eastern Washington win its opening round playoff game?

EWU open the second round with a win over Southland champion Nicholls State in coming from behind in the second half for what in the end was an easy win.

How did the Eagles beat UC Davis in the quarterfinal round?

The Eagles defeated Big Sky rival UC Davis again but this game came down to the end in what was the most competitive game as the Eagles needed a last minute touchdown to get past the Eagles.

How did Eastern Washington defeat Maine in the semi-final round?

EWU was able to host this game as #7 seeded Maine defeated #2 Weber State. Eric Barriere passed for 352 yards and a school and playoff record seven touchdowns as Eastern blewout the Black Bears 50-19.

The win put the Eagles back in the national championship game for the second time in school history.

The one national title and championship game appearance for the Eagles in 2010 was a 20-19 win over Delaware. But the Eagles made the semi-final round six times in its history.

EWU started its affiliation at the NAIA level. The Eagles made one appearance in the NAIA playoffs and made it to the national title game in 1967 but lost to Fairmont (WV) State 28-21.

EWU made the transition from NAIA to the NCAA in 1978 and competed at the Division II level until 1984 when it moved up to the Division I level. EWU competed all of its first NCAA years as an independent until getting a Big Sky Conference invite in 1987.

The Eagles in the past have been a pass happy offense and a defense that limited offenses but really could not shutdown opposing offenses. The Eagles second year head coach Aaron Best has made the transition slowly to be a more of a balanced run-pass offense and a more suffocating defense.

Best took over the Eagles job after the departure of Beau Baldwin, who left to become the offensive coordinator for California in January 2017. Best has been a part of the EWU program since he played for the Eagles from 1996-1999 as a center and long snapper for the Eagles. 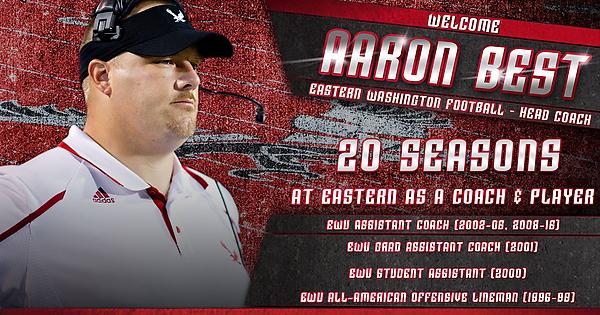 From 2000 to 2001, Best served as a student/graduate assistant at Eastern Washington. From 2002 to 2006, Best served as the offensive line coach at Eastern Washington. After one year of coaching in the Canadian Football League’s Toronto Argonauts, he returned to Cheney to in 2008 as the team’s offensive coordinator and then became the head coach in 2017.

This year’s team as mentioned is coming into Frisco with what was their backup quarterback playing but has also seen a rash of other injuries and off-the-field incidents. Starting safety and another team captain in Mitch Fettig fell to an Achilles injury in the last regular season game against Portland State.

Also, Big Sky Defensive Player of the Year DT Jay-Tee Tiuli is uncertain following a felony arrest on Dec. 9th. He so far is not suspended but is still questionable to play.

Despite all the injuries, the Eagles still ranked second in the FCS in offense at 44.5 points and 540 yards per game, yielded a Big Sky-best 16.8 points per game in conference.

The Eagles were a senior laden team (in fact more than their opponent of NDSU) with 26 seniors (NDSU has 24) to start the season but the younger backups as the statistics have shown have performed with no drop-off.

As can be seen from their storied history with its playoff history and a national title, Eastern Washington should be ready for this game. We shall see January 5th in Frisco if the Eagles will hoist their second Division I trophy.