TOWSON, Md. – Two weeks ago against Sacred Heart, Duquesne was in a must-win game to have a chance to capture the NEC title and the autobid to the FCS playoffs.

After their 28-24 win over the Pioneers, the Dukes once again faced a must-win game against Central Connecticut State, with 24 seconds left in the game Duquesne broke a 31-31 tie with a touchdown to finally, in the last minute of the last game, to finally secure their berth to the FCS Playoffs.

The Dukes were then sent to play Towson in the first round, where thwy were not given much of a chance by FCS Nation to win a single playoff game.

Insetad, Duquesne scored 31 unanswered points after falling behind 10-0, and held Towson scoreless in the second half, as the Dukes won their first FCS Playoff game in program history with a 31-10 victory over the host Tigers on Saturday in a steady downpour at Johnny Unitas Stadium.

“In the second quarter there, I was concerned,” Duquesne head coach Jerry Schmitt said after the game. “I think it was huge that our defense held them to a field goal and held them out the last time before the half because it would have been tough if we got down three or four scores.”

The turning point came right before the half, when Dukes kicker Mitch MacZura booted a 32 yard field goal to go to the locker room only down 10-3 at half. Then early in next half, RB Daquan Worley, a Penn State defensive back who had to switch to the offense midway through the season, rumbled up the middle for a 48 yard touchdown run to tie the game. 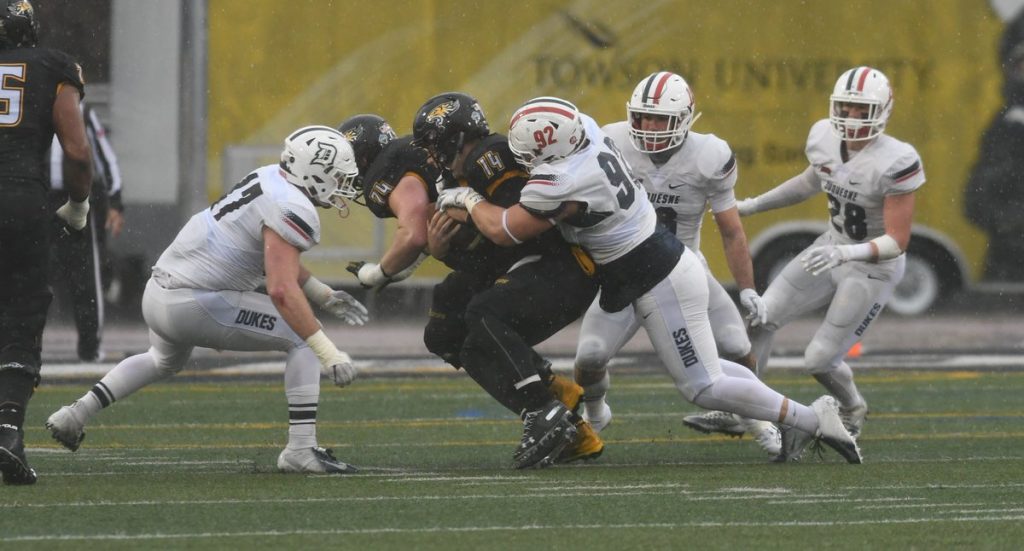 “Them getting points before the half gave them a little momentum,” Towson head coach Rob Ambrose said afterwards. “The difference was the first drive of the third quarter. We did not stop them, period. We gave up big plays and we got the ball run down our throat the entire second half. So they got momentum and they pushed us around.”

RB A.J. Hines finished with 246 yards from scrimmage with a pair of touchdowns to lead the Dukes in the triumph, including a 71 yard scamper that would eventually end up being the score that put Duquesne ahead for good.

With the win, Duquesne not only won its first-ever game against a nationally-ranked FCS team, they also won their sixth straight contest, moving on the second round to face No. 5 South Dakota State next Saturday, Dec. 1 at 3 p.m. ET at Dana J. Dykhouse Stadium in Brookings, S.D. The Dukes are now one of 16 teams remaining in the FCS Playoff field.