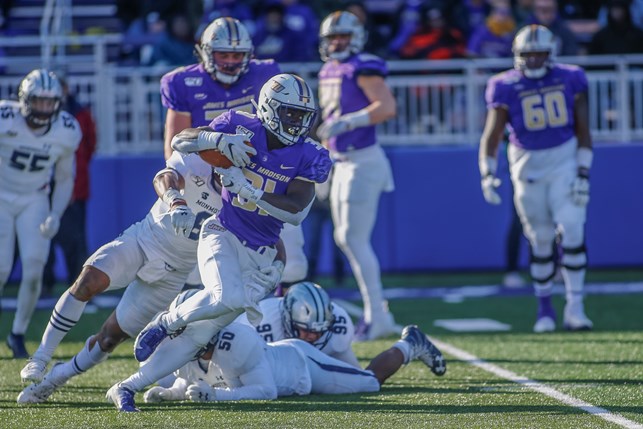 HARRISONBURG, VA – The opening fifteen minutes and five seconds of the second round FCS playoff game between Monmouth and Jamses Madison featured six touchdowns, three by the visiting Hawks and three by the hosting Dukes. After that thrilling start, however, James Madison would score 45 unanswered points on the way to a dominating 66-21 victory.

On the game’s opening kickoff, Monmouth fumbled the ball. No harm was done to the Hawks, as they recovered the fumble on their own seven yard line. One play later, FCS leading rusher RB Pete Guerriero was in the end zone to give Monmouth the lead with an amazing 93 yard touchdown run.

Not to be outdone, Ben DiNucci quickly evened the score on a 49 yard pass to speedy WR Brandon Polk.

Surely the game would settle down from there, right? Wrong.

On the ensuing kickoff, Lonnie Moore made up for his earlier fumble by returning the kick 93 yards for a score. Amazingly, the Hawks had run one offensive play yet had a 14-7 lead.

Undeterred, James Madison answered right back with a 15 play, 75 yard drive that culminated in a Percy Agyei-Obese touchdown run to tie the game at 14.

Finally, JMU got a defensive stop against Monmouth, and as the Hawks lined up to punt, John Daka sped through the line and blocked the punt putting the Dukes in great field position. DiNucci again took advantage, hitting Jake Brown on a 21 yard pass to give the Dukes their first lead of the game.

Monmouth wouldn’t go away easily, putting together a solid 10 play, 75 yard drive to again even the score at 21. Inside Bridgeforth Stadium, the Monmouth fans who made the trip were going crazy, while the home fans were a mix of calm and concern. Six seconds into the second quarter, and the Dukes with their top FCS defense had given up 178 yards of offense.

For the rest of the game, Monmouth would only accumulate 88 yards, with the exclamation point being a blocked field goal by Garret Groulx at the end of the half.

James Madison never looked back, and never punted in the entire game. After the score was leveled at 21, the Dukes scored the last 45 points of the game to provide the final 65-21 margin.

Watch back some of the top plays from JMU’s 66-21 second-round win vs. Monmouth, courtesy of the NCAA.

Ben DiNucci continued his error free ways, going 21 of 25 for 273 yards and two touchdowns while running for 66 yards and adding two more touchdowns. Percy Agyei-Obese added three more touchdowns on the ground, giving him 18 on the year. Polk’s touchdown gave him eight straight games with a touchdown catch.

The Dukes piled up 332 yards rushing, with six runners getting multiple carries. Five of those went over 50 yards rushing. In the pass game, the Dukes had eight different receivers catch a pass. With all of that multiplicity, the Dukes are a tough offense to stop.

The next team to try will be Northern Iowa out of the Missouri Valley Conference. The game will be played Friday night under the lights, possibly in inclement weather.