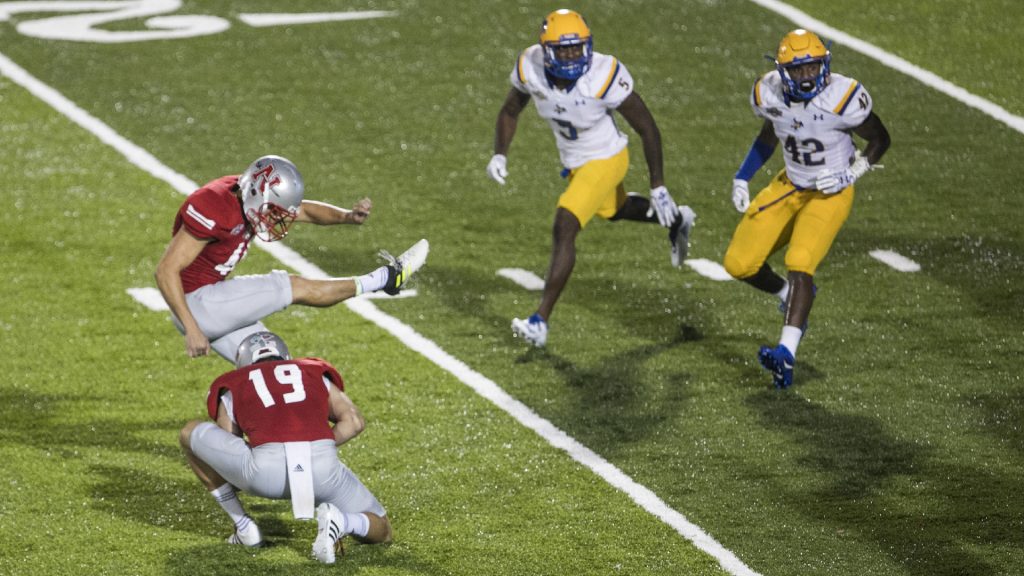 In his coaching debut with the Bison, Coach Mike London and the Howard University Football team stunned FBS foe UNLV with a 43-40 victory in front of 15,000 fans at Sam Boyd Stadium.

“I’m extremely proud of this team. The culmination of this day stemmed from the early workouts to just so many different things. I just give a lot of credit to the players and the coaches who were able to put the game plans together and we’re just so happy with the outcome,” expressed Coach London.

A bet on Howard over UNLV for Saturday’s game brought a big payout for bettors. @Kathleenjjacob breaks it down>https://t.co/iCrVcNK1tr pic.twitter.com/5bRYpTMqI3

Redshirt senior running back Cardon Johnson rushed for 265 yards and two scores as FCS No. 1 James Madison stormed past FBS ECU 34-14 on Saturday night at Bagwell Field at Dowdy-Ficklen Stadium.

JMU increased the longest winning streak in all of Division I football to 13 games while improving to 2-0 all-time against American Conference teams (48-45 at SMU in 2015). The Dukes also snapped a 25-game winning streak for ECU against FCS opponents.

Relive the top ranked team’s win in week one #FearTheFCS

The beginning of Liberty’s two-year FBS transition process started off with an offensive shootout. At the end it was the Flames standing as the victor, 48-45, over Baylor, Saturday evening, at McLane Stadium.

Dajour Nesbeth intercepted a pass with a minute remaining in the game to give Tennessee State a victory over Georgia State in Atlanta on Thursday. The Tigers earned a 17-10 decision to pick up the first collegiate football win in Georgia State Stadium (formerly Turner Field).

The No. 3 Sam Houston State Bearkats opened up the 2017 season with a bang, taking down the No. 7 Richmond Spiders, 48-34, on Friday night at McLane Stadium.

The Kats (1-0) and Spiders (0-1) were originally scheduled to play on Sunday, August 27, but due to effects of Hurricane Harvey the teams were forced to reschedule the game and were able to take the field in Waco on Friday night. For Sam Houston, it had little effect.

Jeremiah Briscoe accounted for five touchdowns and threw for 411 yards as the Kats rolled up 683 yards of offense against a Spider defense that allowed just 317 yards per game a year ago in advancing to the quarterfinals of the FCS playoffs.

Gurley breaks thru. Gil falls on it in the end zone.

Senior running back Matt Gudzak (Toms River, N.J.) ran for a career-high 142 yards and two touchdowns and first-year head coach Mark Ferrante won his debut as No. 10 Villanova (1-0) held on for a 38-35 victory against No. 17 Lehigh (0-1) in front of 5,816 at Goodman Stadium on Saturday afternoon. Despite never trailing in the game, the Wildcats saw what had been a 14-point lead on three separate occasions cut down to the three-point final margin after the Mountain Hawks scored with 4:43 left to play.

“I am really proud of the team and it feels good to get my first head coaching win,” Ferrante said. “There were a lot of big plays on both sides of the ball. We had a little adversity on some of the tipped passes that they got and the long play, but we kept persevering and hanging in there and we were able to finish the game at the end.”

The Wofford College football team opened the season with a 24-23 win over Furman on Saturday night at Gibbs Stadium. The Terriers were down entering the fourth quarter, but a pair of touchdowns gave Wofford a 24-17 lead. Furman scored with 46 seconds remaining, but the two point conversion attempt was intercepted and Wofford held on for the victory.

Junior quarterback Trevor Knight (Amherst, N.H.) threw a pair of touchdown passes and the defense came up with a couple of interceptions in the fourth quarter to lead the University of New Hampshire football team to a 24-23 win over Maine in front of a home opener record crowd of 15,854 in Wildcat Stadium on Thursday night.

Playing in his first game as a Colonel, junior kicker Lorran Fonseca split the uprights from 32 yards out as time expired, lifting the Nicholls State University football team to a 37-35 victory over rival McNeese Thursday night at John L. Guidry Stadium.

Following a first half that saw McNeese (0-1) head into the locker room with a 9-7 lead, the teams combined for eight touchdowns after the break, with the last coming with 3:02 remaining in the game that gave McNeese a 35-34 lead. Cornerback Christian Boutte was able to knock down the two-point conversion pass attempt to keep the deficit at one.

Western Illinois broke open a close halftime score, exploding for 24 points in the third quarter and cruised to a 41-14 season-opening win at Tennessee Tech on Thursday night. The 25th-ranked Leathernecks won their sixth straight season-opener, and second in a row on the road against an Ohio Valley Conference opponent.

“We talked about ‘Finish This Fight’ really since last January. We need to finish better. I used the comparison with the Eastern Illinois game. We didn’t go out and do as good of job in that game a year ago in the second half of the first game. This game we did. We went out and forced some turnovers, forced some stops. Our offense responded and we were able to put the game away,” said head coach Charlie Fisher.