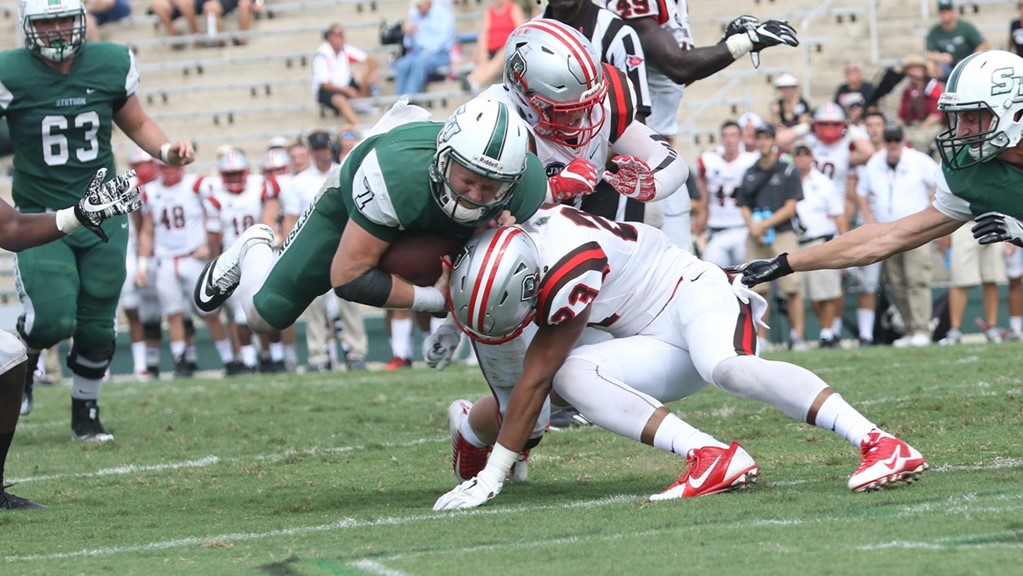 No. 10. The Stetson University football team earned their first win in 2017 as the Hatters dueled to a hard fought victory over Brown University 17-13 at Spec Martin Stadium.

The win improves the Hatters to 1-5 overall this season and snaps a nine game overall losing streak dating back to last season. It was Stetson’s first win at Spec Martin Stadium since Sept. 10 of last season.

“I have coached teams that have won twenty-two straight, gone undefeated and played in bowl games, and I couldn’t be more proud of this group,” Stetson head coach Roger Hughes said. “Nothing feels better than a win for team. The hurts don’t feel as bad, the cuts don’t feel as bad. The next step for this program is to learn how to handle success, that means putting two wins together.”

Check out highlights from today’s win over Brown #SUnited pic.twitter.com/VMDvHWPRnH

The Leopards’ defense set the tone for the game, holding Fordham All-American running back Chase Edmonds to 78 rushing yards. Lafayette was led by Brandon Bryant who racked up a game-high 15 tackles, including 13 solo stops, for the second straight game. Bryant, who is the reigning Patriot League Defensive Player of the Week, is averaging 14.3 tackles per game over the last four contests.

The offense held up its end of the bargain as well, as Rocco Palumbo ended the night with nine receptions for 129 yards and two TD’s. Palumbo’s 63-yard touchdown pass from Sean O’Malley with five minutes remaining in the game proved to be the game winner and was the senior’s longest career reception. O’Malley went 29-of-41 for 256 yards and two TD’s and did not throw an interception.

No. 8. Justin Pratt clipped the 100-yard rushing mark for the second straight game with 109 as the DWA (Defense With Attitude) came up big time and time again by allowing 138 total yards as the 22nd-ranked McNeese Cowboys held on to beat Abilene Christian 13-7 here Saturday night.

McNeese (5-1, 3-1 SLC) won for the fifth straight time and third consecutive game away from home. The team will have an off week next Saturday before returning home on Oct. 21 for Homecoming against Incarnate Word.

“I’m proud of the way our guys continued to battle and get this win,” said head coach Lance Guidry. “I thought the defense was really good tonight. We only gave up one touchdown that come on a short field. They (ACU) have a good team and we knew it coming in. They have the fourth-ranked defense in the conference.”

No. 7. A regulation game is not enough when the University of Richmond football team (3-2, 1-1 CAA) meets up with budding rival Albany (3-3, 1-2). For the second-straight season the Spiders battled from behind to force overtime with the Great Danes and in doing so came away with a 41-38 victory in double-OT.

Quarterback Kyle Lauletta led the charge in more ways than one. He not only threw for 353 yards and three touchdowns but he also nearly led the team in rushing, gaining 19 yards on seven carries to go with a rushing score. His three passing touchdowns give him 62 for his career, leaving him atop the all-time program record book in that category. This game marks his fifth-straight 300-yard passing game and 13th for his career; both program records.

No. 6. In yet another close contest for the Wofford College football team, the Terriers earned a 35-28 overtime win over Western Carolina on Saturday afternoon at Gibbs Stadium. The Catamounts tied the game at 28 with three minutes remaining. Wofford scored a touchdown to open overtime and then an interception in the end zone secured the win for the Terriers.

Wofford, ranked fifth in the nation, opens the season 5-0 overall and 3-0 in the Southern Conference. Western Carolina is 4-2 on the season and 2-1 in the league, with a #22 national ranking. The Terriers were led by Andre Stoddard with 157 yards on 21 carries and two touchdowns. Lennox McAfee added 88 rushing yards and Lennox McAfee had 86 yards on the ground. The Catamounts were led by Tyrie Adams with 76 rushing yards and a touchdown, while completing 17-of-26 passes for 195 yards and two touchdowns.

“It was one of those games that was either going to make your team or break your team,” said head coach Mike Ayers. “For whatever reason we have been able to come up with the play in all of the games that we have played. Western Carolina is a much improved team and came in with a lot of confidence along with an explosive offense. We knew that it was going to be a very difficult game. We knew we would have to have everything clicking on all cylinders. I am proud of the kids and the coaches. I felt like we were ready for what they were going to bring and couldn’t be prouder of the effort.”

No. 5. The University of Delaware picked up the signature football win it’s been searching for Saturday night as the Blue Hens rallied from a 10-point halftime deficit and downed No. 23 ranked Stony Brook 24-20 at LaValle Stadium.

Malcolm Brown’s picked up a fumble and raced 45 yards for a touchdown with 4:04 left in the third quarter to pull the Blue Hens to within three points and fullback Kani Kane’s six-yard scoring burst just two minutes into the final stanza proved to be the game-winner as Delaware (3-2, 1-1 CAA) picked up the pivotal Colonial Athletic Association win.

Stony Brook (4-2, 3-1 CAA), which entered the game tied atop the CAA standings with an unbeaten mark in league play, had a four-game win streak snapped despite leading 20-7 at the break.

No. 4. The cardiac kids are back, and they are pre-maturely aging their head coach already.

The Eastern Washington University football team rallied from an 11-point deficit in the fourth quarter by scoring 21 points in the period and went on to spoil the upset hopes of UC Davis with a heart-stopping 41-38 victory over the Aggies Saturday (Oct. 7) at Davis, Calif. It was the third Big Sky Conference win in three tries this season for the Eagles, who have now won 11-straight league games.

Junior quarterback Gage Gubrud engineered scoring drives of 71, 55 and 75 yards in the final quarter, and finished with six touchdown passes and 452 yards passing. He passed 6 yards to Nic Sblendorio for a game-winning TD with 1:37 to play, followed by a missed 49-yard field goal by the Aggies that could have knotted the game.

No. 3. The Northern Arizona football team rang up 431 yards of total offense against the nation’s No. 2 ranked defense as it posted its third consecutive victory by a 37-16 count over No. 7/11 Illinois State on Saturday at the J. Lawrence Walkup Skydome.

The Lumberjack defense intercepted three passes and recorded five sacks in the win while limiting the Redbirds’ rushing attack, which entered the contest averaging 190.2 yards per game, to just 63 yards on 29 carries.

With the win, NAU moves its overall mark to 3-2. The victory also marked the Lumberjacks’ first over a ranked opponent since they defeated then No. 10 Montana 45-34 on Oct. 22, 2016. Illinois State suffered its first defeat of the season and slips to 4-1 overall.

No. 2. Jack Heneghan threw a 15-yard scoring strike to Drew Hunnicutt on 4th down with 34 seconds left to finish off a rally from a 21-0 deficit and lift Dartmouth (4-0, 2-0 Ivy) to a historic 28-27 victory over Yale (3-1, 1-1 Ivy), thrilling the homecoming crowd of 8,114 on Saturday afternoon at Memorial Field. David Smith added the extra point to break the tie and provide the winning margin as the Big Green enjoyed its largest comeback victory in 136 years of varsity football.

Heneghan posted his fifth career 300-yard game, completing 24-of-42 passes for 314 yards and three touchdowns with 276 of those yards coming in the second half. Junior Dylan Mellor was his favorite target with seven catches for a career-high 133 yards and a touchdown, while Hunnicutt hauled in five passes for 64 yards and two scores.

No. 1. Sean McGuire found Jaelon Acklin for a 20-yard touchdown with six seconds left Saturday (Oct. 7) to seal a wild 38-29 comeback win for the Western Illinois Leathernecks over the Northern Iowa Panthers in the UNI-Dome.

“There’s no quit in these guys. Our offensive line dug down in deep. That’s what championship football is, and that’s what championship drives are all about. These are memories. When these kids do things like this, these are things they will remember for a lifetime, said head coach Charlie Fisher. “”When adversity strikes, you don’t give in. I just told them at halftime, ‘We need to just flip the switch and change the tide.’ And we did. We played well enough, obviously against a very good opponent in a very tough environment. There’s a lot to be had here, and there’s a lot our team gained in this win.”

BRING OUT THE GATORADE!

What about that LEATHERNECK WIN.

Round Five goes to Western. 💯💯💯 pic.twitter.com/KeBJJtJqnI