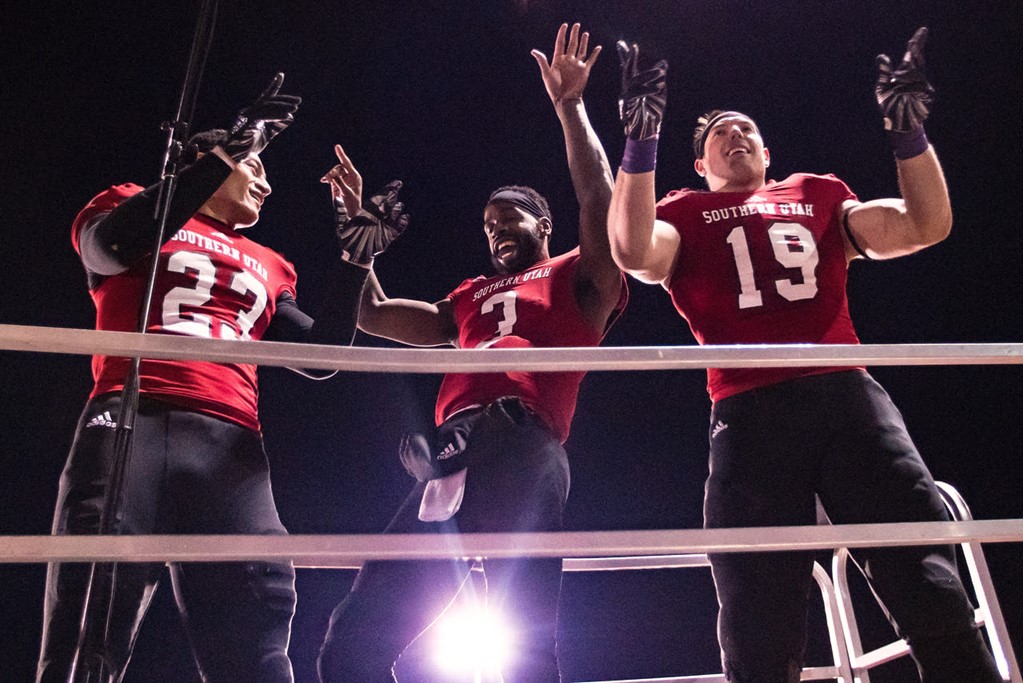 No. 10. The No. 22/RV Northern Arizona football team scored 35 unanswered points after falling behind 7-0 to extend its current winning streak to five consecutive games as it rolled to a 45-31 victory over UC Davis in Big Sky Conference action on Saturday at the J. Lawrence Walkup Skydome.

The five-game winning streak represents the longest for the ‘Jacks since 2013 when it posted six consecutive victories. With the win, Northern Arizona improves to 5-2 overall and a perfect 4-0 in Big Sky Conference action. UC Davis slips to 3-4 on the season and 1-3 in conference play with the loss.

“The best of part the game that I really liked is our response to the early turnover,” NAU head coach Jerome Souers said. “The way Maurice Davison stayed in position and then they overthrew the ball and he picked it. Then our offense climbed on top and scored, then we got a stop and scored. It was 35 unanswered points and that was huge. It didn’t put the game out of reach but it forced them to have to take a lot of chances.”

No. 9. Behind 608 total yards and multiple broken program records, the Monmouth University football team ran past Liberty to improve to 6-1 on Saturday afternoon, 56-39.

The Hawks are 3-0 at home this season, outscoring opponents 133-78 in that span. Sophomore running back Pete Guerriero (Lyndhurst, NJ/Lyndhurst) scored the longest kickoff return in Monmouth history in the first quarter, taking it back 95 yards to tie the game at 7-7. Guerriero added 162 rushing yards and was six yards shy of setting the program record for all-purpose yards in a single-game with 257.

No. 8. Juwan Carter threw four TD passes, including a pair of long scoring plays to Marcus Taylor, and the Norfolk State defense came up with two late interceptions that helped clinch the Spartans’ 28-21 win over defending MEAC champion and No. 25 ranked North Carolina Central on Saturday afternoon at O’Kelly-Riddick Stadium.

Smith was a force on defense for NSU, which defeated a ranked FCS team for the first time since topping No. 10/12 Bethune-Cookman in 2013. Smith amassed a career high-tying 18 tackles and two interceptions, and he also forced a fumble in the first half as NCCU (5-2, 3-1) appeared headed for a sure touchdown.

Marcus Taylor went for a career-high 132 yards and two TDs in @NSU_FB‘s 28-21 win over #25-ranked N.C. Central on Saturday#UndefeatedTop10 pic.twitter.com/NTvcbU5ALH

No. 7. Columbia’s defense came up with two key stops in the game’s final three minutes, including a key sack in the closing seconds to give Columbia a 22-17 victory Saturday at Dartmouth before 5,237 fans at Memorial Field. The contest featured a matchup of the Ivy League’s two teams tied for first place in the standings, the final two unbeaten teams in the conference and two of the nation’s seven remaining undefeated teams.

In addition, Columbia won its seventh consecutive game for the first time since 1935.

No. 6. The Thunderbird football team knocked off the No. 8 Eastern Washington Eagles on Saturday night with a come from behind victory, ending at 46-28.

“Obviously this is a huge win for our program,” SUU head coach Demario Warren said. “Our guys just battled.”

This was SUU’s third victory over a Top 25 opponent this season, and the second in as many weeks. The win improves SUU to 5-2 on the season and 3-1 in Big Sky Conference play.

“It puts a goal right in front of us now,” Warren said when asked what the victory meant. “Our first goal is to have a winning season, we’ve never had three winning seasons in a row, so now it puts that right there for us.”

The Redbirds handed the Coyotes their first loss of the season and the win for the ISU over the No. 4 team in the country was their highest win over a ranked opponent since defeating No. 1 New Hampshire in the semifinals of the 2014 FCS playoffs.

Sophomore tailback James Robinson led the Redbird rushing attack with a career-high 193 yards on 19 carries with a pair of scores and junior wide receiver Spencer Schnell also had a career day with 191 yards on seven receptions with two touchdowns. Senior defensive back Davontae Harris led the ISU defense with 11 stops and sealed the game with a late interception, while fellow senior defensive lineman Dalton Keene tallied two sacks on the day for the Redbirds, who forced USD quarterback Chris Streveler to throw his first two interceptions of the season.

No. 4. The University of Delaware football team celebrated Homecoming in style Saturday afternoon as the Blue Hens posted a thrilling 42-35 double overtime win over No. 11 Richmond at Delaware Stadium.

Delaware (5-2, 3-1 Colonial Athletic Association), which won its third straight game and earned its second consecutive win over a Top 25 opponent, went ahead on a one-yard scoring dive by junior fullback Kani Kane (#29 at right) to open the second overtime and the defense took over from there, sealing the deal with a big stop of the Spiders (4-3, 2-2 CAA).

The victory gave Delaware an emotional triumph for first-year head coach Danny Rocco, who served as head coach of the Spiders the previous five seasons.

The Panther defense recorded 10 sacks on Saturday, coming within one quarterback takedown from tying the program record. The 10 sacks are tied for the most by any FCS team this season, with Eastern Washington also earning 10 against Fordham on Sept. 16.

No. 2. Colin Jonov returned an interception 95 yards for a touchdown in overtime to lift the Bucknell football team to a 13-7 victory over Lafayette Saturday afternoon at Fisher Stadium.

“It’s an indescribable feeling,” Jonov said. “Initially, I saw a cutback, and I took it. And then, after I saw and took the cutback, I saw nothing but green. I was just thinking, ‘Do not go down no matter what. Just stay on your feet and score.’ And that’s what happened.”

How about this for a #SCtop10 play? Colin Jonov returns an interception 95 yards for a game-winning touchdown in overtime! #StartTheStampede pic.twitter.com/mDF604Ztir

No. 1. Samford senior defensive back Omari Williams intercepted a Wofford pass in the end zone with six seconds to go as the 14th-ranked Bulldogs earned a 24-21 win at No. 5 Wofford Saturday afternoon at Gibbs Stadium.

The win was Samford’s first victory over a top-five ranked opponent since Oct. 10, 1992 when the Bulldogs earned a 46-14 win over third-ranked Eastern Kentucky. Samford improves to 5-2 overall and 3-1 in Southern Conference play. Wofford falls to 6-1 overall and 4-1 in league games.