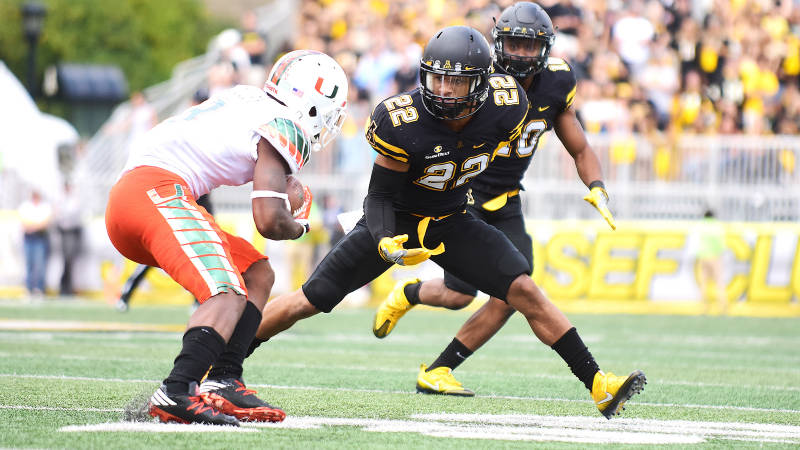 BOONE, N.C. — Another game of opportunity slipped through Appalachian State’s grasp on Saturday afternoon before a record-setting football crowd of 34,658 fans at Kidd Brewer Stadium and a national-television audience on ESPN.

But this time, it was a pair of momentum-snuffing big plays at the beginning of both halves — instead of the end of the game — that sent the Mountaineers spiraling to the 45-10 loss to the No. 25-ranked Hurricanes.

Miami tailback Mark Walton (16 carries, 130 yards and two TDs rushing) silenced the overflow crowd with an 80-yard scoring scamper on the first play from scrimmage for the Hurricanes.

Quarterback Brad Kaaya (21-of-27, 368 yards, three TDs passing) exposed the ASU secondary with a dagger of a strike for 61 yards to Ahmmon Richards to set up the third-quarter touchdown that turned the game into a rout.

“I’m very proud of our team,” said Miami coach Mark Richt. “We came in prepared and played with the type of edge that you have to against an outstanding team such as Appalachian State — a team that’s super physical and super good at what they do.”

Richt also said that ASU had grabbed Miami’s concentration with the season-opening performance at No. 9 Tennessee, where the Mountaineers throughly outplayed the Volunteers, only to lose 20-13 on a fluke touchdown in overtime.

“It truly got our attention,” Richt explained. “I did not have to say something magical to get them fired up. They knew they were in for a tough ballgame.”

Appalachian coaches and players had talked all week long about the need to keep Miami’s high-octane offense from quick strikes, but that was exactly what the Hurricanes did in impressively ripping apart the Mountaineers’ acclaimed defense.

“One thing we pride ourselves on is not giving up the big plays offensively,” App State coach Scott Satterfield said. “We have three rules and that’s one of them. Today, we didn’t tackle that well, but we knew (Miami’s) backs were really good and they are hard to bring down.”

Receiving excellent protection from an offensive line constructed by former ASU assistant coach Stacy Searels, Kaaya showed why he is considered one of the top passers in the 2017 NFL draft class.

He wounded the Mountaineers (1-2) with completions of 55 yards to Stacy Coley for a first-period touchdown off a coverage bust and for 54 yards to David Njoku, in addition to the perfectly-placed toss to Richards.

“We thought we needed to go out and make a statement in the passing game,” said Kaaya. “The philosophy this week was to go fast and see how fast we could go.”

Miami (3-0) hurt the Mountaineers in the first half with its jet tempo — a trait that ASU thrived with in developing the spread and running it to perfection in three FCS national championship seasons from 2005-07 — and repeatedly gained significant yardage on bubble screens.

Appalachian supporters were stunned by the Hurricanes’ 21-0 first-period outburst and Miami turned that burst into a 24-3 lead by the half.

Every time it looked like ASU was about to stem that tide, circumstances intervened to place the Mountaineers back into peril.

“In the first half, just everything that could go wrong on offense went wrong,” said App State quarterback Taylor Lamb (10-of-21, 115 yards passing). “We would move the chains and then penalties would back us up. You can’t do that against a good team like Miami.”

Trailing 14-0 after scores by Walton and Njoku, ASU tailback Marcus Cox injected the crowd with a shot of adrenaline when he broke into the secondary on receiver Shaedon Meadows’ fundamentally-sound, perfectly-executed seal block and scooted 79 yards for an apparent touchdown.

But instead of cutting Miami’s lead to 14-7, a highly-questionable penalty flag appeared from one of the ACC officials’ pockets to nullify the score. Replays appeared to show Meadows had not committed a foul, but the holding penalty killed the momentum that Appalachian had so quickly obtained.

Unfortunately for the Mountaineers, it was also the last play of the game for Cox, who had seven carries for 30 yards instead of eight for 119 in only one quarter. The senior co-captain was listed with what was called a “lower-body injury” on a play where he looked to injury a knee.

Sophomore Jalin Moore replaced Cox and rushed for 89 yards on 23 carries after struggling in his first two games. Cox had begun the year with back-to-back 100-yard performances on the ground.

After Miami and ASU traded field goals in the second period and the Mountaineers lost a chance to cut further into the Hurricane lead when Michael Rubino narrowly missed his 42-yard field goal in the final seconds of the first half, there was still another chance for Appalachian to climb back into the game.

Kaaya drove the Hurricanes to a first-and-goal at the ASU two on the first possession of the third quarter, but the Mountaineers held for three consecutive downs. On fourth down, Kaaya tried to hit fullback Marquez Williams in the flat, but App State linebacker John Law read the play, jumped the route and intercepted at the two.

Law sprinted 60 yards before he was tackled at the Miami 38, but the defensive stand rekindled the pro-Appalachian crowd.

Six plays later, a nifty twist on one of the favorite pages from the App State playbook — the waggle pass — turned into six points as quarterback Taylor Lamb hit a wide-open tight end Barrett Burns for 24 yards and the score.

The massive crowd erupted in noise and became even louder when the ASU defense forced an incompletion and a rush for no gain on the next two Miami plays.

Facing third and 10 from his own 25, Kaaya cut the heart out of the Mountaineers with one awesome throw. With Richards racing behind the secondary, Kaaya lofted his feathery throw to the freshman speedster in full stride.

Miami followed up that 61-yard arrow with Joe Yearby’s 12-yard, pinball-like run into the end zone and the rout was on with Miami leading 31-10.

The Hurricanes tacked on two more touchdowns the rest of the way to further exploit the Mountaineers. Miami piled up 549 yards of total offense, compared to only 241 for ASU

Appalachian will have a week to recover before hitting the road for its second road game of the non-conference schedule — a 3:30 p.m. contest next Saturday at Akron.

“It’s been a tough non-conference (schedule) and we’re going to have to come back strong next week,” said Satterfield. “Akron is a good football team. We have to regroup and go back to the basics, tackling, blocking, throwing and catching.”