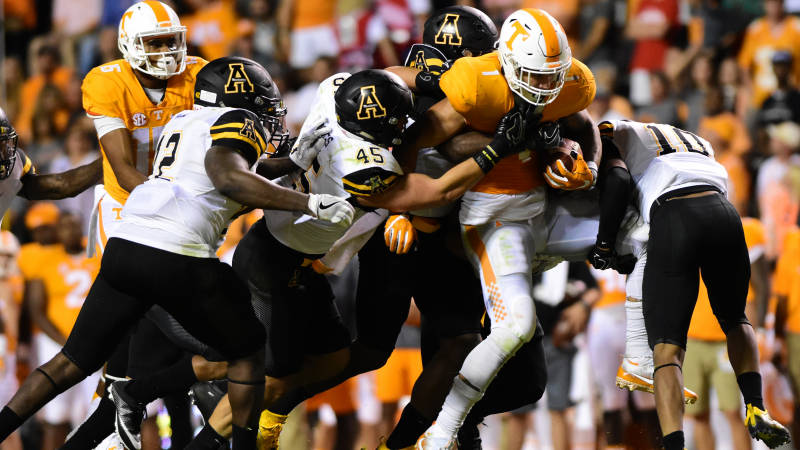 BOONE, N.C. — When Appalachian State University made the move from the Football Championship Subdivision to the Football Bowl Subdivision, it was with Saturday’s matchup in mind.

When the Mountaineers (1-1) entertain the No. 25-ranked Miami Hurricanes (2-0) on Saturday at noon in Kidd Brewer Stadium, it will mark the most anticipated regular season home game in program history. It will mark the first time that a member of a Power 5 conference — in this case the ACC — has ever traveled to Boone.
And it will also be one of those moments that legendary ex-ASU coach Jerry Moore likes to call opportunity games. After narrowly missing on a chance to beat Tennessee in the opening game of the season, the Miami contest gives the Mountaineers another chance to expand their national reputation.
Fans, coaches and players alike have been anticipating this contest with one of the country’s most popular teams since it was announced last spring. Mountaineer officials expect a record crowd of over 34,000 and the game will also kickoff weekend college football coverage on ESPN.
The Appalachian community is also excited because they see their team as having a chance to win one of the most important games the Mountaineers have ever played.
“There is some great coaching going on,” Miami coach Mark Richt said of ASU coach Scott Satterfield and his staff. “It starts with great recruiting. They have guys who can really play the game of football, they play with high energy. The defense plays tremendous fundamental football.”
Richt said he is well aware of what his Miami squad will be facing on this special day.
“It’s got to be a huge day for their program,” Richt added. “I can’t imagine them not being super hyped and ready to go. You see that on film regardless of who, or where they’re playing. (That is) another sign of a well-coached team.”
Satterfield was pleased to hear of Richt’s compliments.
“It speaks volumes about our coaching staff and how our players execute,” Satterfield said.
While pleased with the accolades, most of the Mountaineers realize that such respect has been well earned over a stretch of games between 2014 and present where they have won 18 of their past 21 games.
“We expect that from anybody,” said senior inside linebacker Eric Boggs, who will be one of the key performers to stopping the Hurricanes’ potent rushing attack. “That is how we are taught to play. It is understanding the defense and what an offense wants to do to us.”
Boggs said the Mountaineers must control Miami’s deep passing game, fueled by projected NFL first-round quarterback Brad Kaaya, and keep the Hurricanes from getting big plays on the ground from the running back duo of Mark Walton and Joe Yearby. Walton and Yearby rank eighth and 20th respectively in national rushing statistics.
“The biggest challenge is to stop the run,” Boggs added.
While still taking a one-game-at-time approach, the App State players are well aware of what is at stake.
“This is the biggest game since I’ve been here,” said ASU tailback Marcus Cox, who has stepped his game up to another level in his senior season with back-to-back 100-yard rushing performances as he closes in on a multitude of Mountaineer career records.
Appalachian will look to use its traditional approach to success, even in this most unusual of games, controlling the pace of the contest with its physical line play and running the football to keep its steady and sound defense fresh.
Satterfield said he was impressed with what he had seen of the young Hurricane defense after watching Miami’s easy wins over Florida A&M and Florida Atlantic.
“What really stands out from the film is their defensive line,” Satterfield said.
But with all of the circus atmosphere expected around the game, this Appalachian lifer, who has been a part of most of the Mountaineers’ magical moments in the past quarter-century as a player, assistant and now head coach, added that it still comes down to basics.
“We want to play well and we want to get another win.”