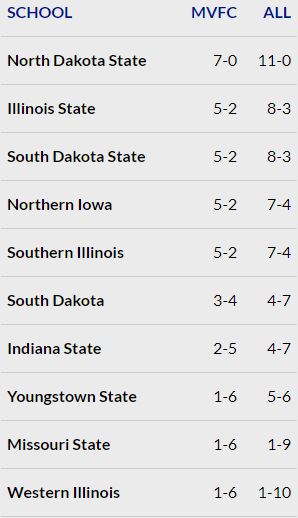 North Dakota State clinched its ninth straight Missouri Valley Football Conference title with its win over South Dakota 49-14. The Bison clinched the title outright for the fifth time and third straight year with second-place Northern Iowa taking its second loss of the conference season 38-7 at South Dakota State. NDSU will take a 32-game winning streak to Southern Illinois for the regular-season finale next weekend.

South Dakota State rebounded after losing in Week 10 at home to Illinois State. The Jackrabbits turned in its most complete performance of the season, putting together a big second half in defeating Northern Iowa, 38-7. SDSU used four turnovers and out gained the Panthers 337 yards, while yielding just 239.

Southern Illinois ran for a season-high 388 yards and forced five turnovers to win its fifth-straight game, a 45-21 victory at Western Illinois. The Salukis RB D.J. Davis carried for a career high 208 yards and scored twice. Freshman RB Javon Williams, Jr.. added three more touchdowns to extend his TD total to a nation-best-among-freshmen of 18 to help lead the SIU charge. SIU got its seventh DI win to be playoff eligible and may not need a win next week against NDSU to get a playoff spot.

Illinois State did win but did not look too impressive in its 17-12 win at home over Missouri State. The Redbirds needed a big stop from senior S Luther Kirk on fourth-and-goal play with under a minute to play to secure the win. RB James Robinson, however, did his part with 155 yards on the ground to record his sixth 100-plus yard effort of the season.

Indiana State recorded 383 yards of total offense, including 242 yards rushing but it was the defense that made the final stand to help the Sycamores take down Youngstown State 24-17. The Penguins had a chance at the end to tie the game but after driving near mid-field, the Sycamore defense forced four consecutive stops, including a nine-yard sack from DE Kaleb Brewer to preserve the win.

Here is my take in order of playoff hopefuls. I think the MVFC as the strongest conference at least in terms of the Sagarin Rankings in the FCS, will get five teams into the 24-team field. Southern Illinois will be the last team and I think they get in by having an FBS win even if the Salukis do not upset NDSU next weekend. Northern Iowa needs to win over Western Illinois next weekend but the other three teams, I feel, are locks.

Below are some video highlights of each game last weekend with the detailed game recap in the score hyperlink.

The play that sealed the victory for the 'Birds! @CaptainKirk140 with the SACK for the win #REDBIRDfootball pic.twitter.com/1kk9ZRbARD