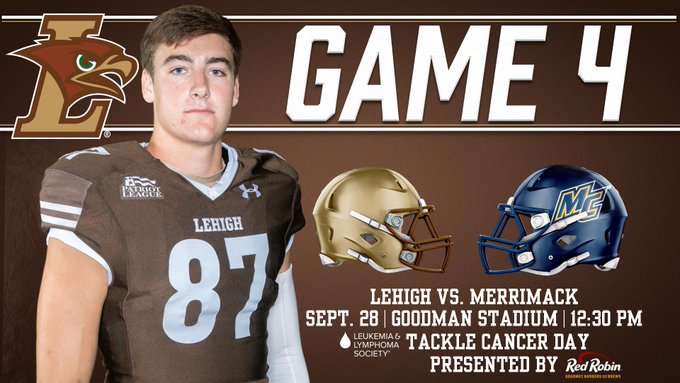 Lehigh and Merrimack have never faced off on the gridiron before.

But both teams have an enormous amount to prove this Saturday at Murray Goodman Stadium.

For the 2-2 Warriors, who are officially transitioning from Division II to Division I athletics, the goal is to not only get their first win against a Division I opponent during their transition, but to show FCS Nation that they are ready to play against any program in the FCS, no matter its age.

For the 0-3 Mountain Hawks, the goal is to show the rest of FCS and the Patriot League that they need to pay attention to a young Lehigh team that seems to be getting better in many ways, but so far hasn’t translated into wins.

In the end, the matchup this weekend will be a show-me type of game, one that might set the trajectory for both programs. Lehigh, whose football program was founded in 1884, and Merrimack, whose team was formed in 1996, still don’t even technically share a division.

Merrimack, until recently a member of the Northeast-10 conference in Division II, announced they are going to join the NEC as a full Division I member in time for the 2023-2024 season.

“The College’s 2011 strategic plan, the Agenda for Distinction, called for Merrimack College to become a Division I institution to compete and excel at the highest level,” president Christopher E. Hopey said almost a year ago in announcing their move to the NEC. “We are pleased that our record of achievement and growth has resulted in this invitation to compete in the NEC and partner with its outstanding member institutions.”

Called the Warriors due to their institution’s role in educating World War II Veterans after the war, Merrimack has probably been best known for their Division I hockey team, which has competed in Hockey East for the last 30 years. But their football team has had periods of success, too, reaching the Division II playoffs in 2006.

“There’s no question we have the top tier players to be successful,” Warriors head coach Dan Curran said before the season started. “They’ve always been able to play with anyone. What we need to do going forward is to develop more depth because injuries are going to happen. We’re not where we want to be but we’re getting there. We’re starting to see the gap between the starters and the backups get tight.”

They’ve certainly shown already that they’re not a team to be taken lightly. Besides their two overwhelming home wins against sub-Division I opponents, the Warriors led at St. Francis (PA) at halftime and took Central Connecticut State down to the wire, who came oh-so-close to upsetting FBS Eastern Michigan last week.

“Eight of our 11 opponents are Division 1 and this is by far the most competitive schedule we’ve ever had,” Curran said before the season. “We know what we’re getting into but we’ve shown we can play with the top teams and we’ll be ready.”

Lehigh has been around a lot longer as a football program than Merrimack.

Founded in 1865, Lehigh started their first intercollegiate football program in 1884 and have been playing football for 135 years. Recently, it was revealed that the Mountain Hawks are 8th place in all of FCS when it comes to total wins with 694.

But none of those wins have come yet this season.

Head coach Tom Gilmore comes off of a Mountain Hawk bye week 0-3, and looking for his first win as Lehigh’s head football coach. Lehigh was soundly beaten in two games against Top 25 opponents, Villanova and UC Davis, but lost a heartbreaker to St. Francis (PA) 14-13, where the game-winning field goal sailed wide right to deny Gilmore the win this week. (The Red Flash’s two wins came against Lehigh and Merrimack.)

This week, looking to add to Lehigh’s overall win total, Gilmore said he spent the bye week focusing on fundamentals.

“We’re playing fast, playing more game-like situations,” he said this week. “We wanted to get better at some of the base things that we do. There were a few things we felt we needed to add in all three phases of the game, and this was a good week to add that. We’re looking for constant improvement.”

He added that he was looking to see that more than any other week, he wanted to see fundamental improvements from last game to this weekend’s tilt.

This weekend will be the perfect opportunity for this team to show the staff and the fans the extent of that improvement.

Against UC Davis, who gave North Dakota State everything they could handle last week in the Fargodome, Lehigh had a tough time slowing down QB Jake Maier and the UC Davis offensive machine, while being kept off the scoreboard until the 4th quarter in a 41-13 win.

“I think our guys competed,” Gilmore said. “Even though the score didn’t go our way, I think it showed our players from a physical standpoint that we have a chance to do good things with the rest of the season.”

Slowing down Merrimack’s offense, who put up 76 points against NAIA Mayville State last week, will be the top priority of LB Keith Woetzel, S Sam McCloskey and DE Juwan Morrow this weekend.

“Their quarterback does a great job running the offense,” Gilmore said. “They have a bunch of big-play potential guys that can run really well and have good size. They have an outstanding wide receiver that can play anywhere.”