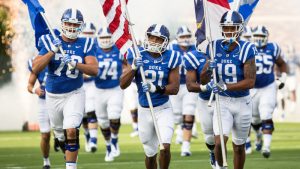 BOONE, N.C. — On North Carolina’s “Tobacco Road”, the start of college football always meant
that college basketball is only two and a half months away.

Duke, North Carolina, NC State, UNC-Charlotte, North Carolina A&T, Winston-Salem State, Guilford, among others, have always carried the athletic torch for the state’s colleges and
universities by winning conference championships and plenty of national championships in basketball and let football be a warm-up for the hoops season.

Oh my how the times have changed.

Now, a trip to Tobacco Road is not an easy experience for a visiting football team.

David Cutcliffe, in his 11th-year as the coach of the Blue Devils, has had a miraculous transformation of Duke’s football fortunes. Cutcliffe has led Duke to five bowl games in the
last six years including back to back 9-4 seasons in 2013 and 2014. He holds a 65-67 record for
his time at Duke which is amazing considering Duke was 10-82 the previous 8 seasons.

Duke is the only team in the country with two Power 5 road wins this season (Northwestern and
Baylor).

Wake Forest has had a long transformation of their football program as well. Fifth year coach,
Dave Clawson, coming off a terrific 8-5 season which included a season ending Belk Bowl victory
over Texas A&M 55-52.

Part of that success is due to the stability at the quarterback position under Clawson and
previous coach Jim Grobe. Since 2010, only one school in the nation has had fewer starting
quarterbacks in the season-opener than Wake Forest. Sam Hartman became just the fourth opening day starter over the past nine seasons for the Deacons.

Only Troy has fewer opening day starters than Wake Forest.

NC State, under the direction of sixth-year coach Dave Doeren, coming off a 9-4 season that
included a 52-31 Hyundai Sun Bowl victory over Arizona State, has made the Wolfpack a threat to
just about any college team in the country.

The Wolfpack joined Miami (1993 with Craig Erickson, Jim Kelly, Bernie Kosar and Vinny
Testeverde), Michigan (2004 with Tom Brady, Brian Griese, Chad Henne and John Navarre) and USC (2009 with Matt Leinart, Matt Cassell, Carson Palmer and Mark Sanchez) as the only school ever to have four alumni starting at quarterback in the same NFL season.

In it’s fifth year of Sun Belt-FBS membership, Scott Satterfield’s App State squad has gone 38
-15 including a narrow 45-38 OT loss at Penn State this season and has a sparkling 27-5 record versus Sun Belt competition.

The Mountaineers are coming off of back to back Sun Belt championships and had a convincing 34-0 shutout win over MAC champion Toledo.

Zac Thomas, who replaced four year starter Taylor Lamb at QB, was named the CFPA National
Performer of Week 2 after he went 14-of-14 passing for 295 yards and accounted for four
touchdowns, including three through the air, in a 45-9 win at Charlotte. The redshirt sophomore
from Trussville, Alabama, became the first App State or Sun Belt quarterback to finish a game
with at least 10 completions and no incompletions.

Charlotte showed during its game with the Mountaineers that it is still a long way from being a successful FBS program, as the 49ers were outclassed in every aspect of play.

Let’s don’t forget about FCS member North Carolina A&T Aggies who currently are tied with UCF for the longest Division I (FBS &FCS) winning streak in the country at 15 games. The 49ers did
show more promise by knocking off Old Dominion in their Conference USA opener the following week.

Rod Broadway built the Aggies into a national power and capped off a perfect 12-0 season with a 21-14 Celebration Bowl win in Atlanta over Grambling. Broadway retired from coaching after that perfect season.

In steps Sam Washington and nothing changes. The Aggies beat Jacksonville State (#6) 20-17 in
the FCS Kick Off Classic and followed that up with a 28-23 FBS road win at East Carolina, who
the next week downed the North Carolina Tar Heels 42-19.

Campbell University became a full scholarship program this season and joined the Big South
Conference this season. The Camels are shooting for football success and are in a good position
to obtain that goal.

College Football is alive and well on Tobacco Road… Thank you very much!!

****NOTE**** University of North Carolina will be eligible for the Dandy Dozen when the 14
players suspended for breaking NCAA rules violations are reinstated.