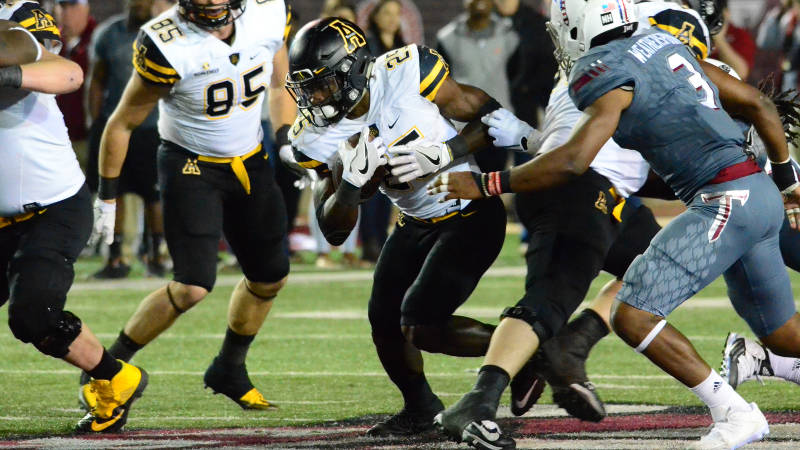 TROY, Ala. — Victory and a likely Sun Belt Conference football championship were one play away from Appalachian State on Saturday afternoon at Veterans Memorial Stadium.

But Troy University turned a fourth and five at its own 47 into a life-preserving first-down catch and Jordan Chunn’s 11-yard scoring burst on the next play lifted the Trojans to their dramatic and somewhat controversial 28-24 victory in the first-place showdown.

Sidney Davis got behind the secondary on the sideline to make a diving catch for 43 yards to keep the game alive for Troy and set up the winning touchdown for Chunn (31 carries, 129 yards rushing)

“That was a great college football game,” said ASU coach Scott Satterfield. “Two really great teams battling it out. We went down and thought we won the game with a heck of a surprise, then they went down and did the same thing. We ran out of time there at the end.”

Troy hosts Arkansas State (5-4, 5-0) in the battle of the two remaining undefeated teams on Thursday night in a nationally televised contest.

ASU will try to regroup and stay alive for a possible share of the title with wins in its final two conference games, next Saturday at home in a 2:30 p.m. contest against Louisiana-Monroe and on Nov. 26 versus New Mexico State on the road.

Taylor Lamb (14-of-28 passing for 167 yards) and the Mountaineers scrambled down the field from their own 24 to the Troy 38 in the final 57 seconds, but two passes into the end zone to Shaedon Meadows (six catches, 58 yards) were knocked away in the final nine seconds.

“They ran a curl wheel on the side line and got one-on-one coverage over there,” Satterfield said of the key fourth-down situation. “Great throw by the quarterback. Great catch. We pass interference on the catch and he still caught the football, which put them down here in the red zone and they ended up scoring.”

Officials also created some anguish among ASU coaches, players and fans on the previous play when Meadors was initially ruled to have made a catch at the Trojan 24 by one official before another rushed in late to call it an incompletion.

App State immediately called a time out after the catch was called complete, but the Mountaineers lost at least one or two seconds on what would have been an automatic first down.

The Mountaineers had lost a time out earlier in the second half on a controversial play where Chunn was hit by ASU defensive end Dezmin Reed as Chunn underhanded the ball to a teammate.

It appeared in live action to be a fumble that Reed recovered at the App State 46, but it was ruled to be a forward incomplete pass after video review, costing the Mountaineers a crucial game stoppage for the finish.

Time management was again an issue for Appalachian on the final drive, with the Mountaineers burning 14 seconds after Jacquil Capel’s sprawling grab at the 38 when they failed to call a time out.

Even before the frantic final minutes, this contest had everything you would have expected from two undefeated conference opponents.

Appalachian came out shaky in the opening quarter and fell behind 14-0 as Troy finished drives with Chunn’s one-yard TD blast and Brandon Silvers’ three-yard scoring toss to Deondre Douglas.

But the momentum completely changed in the second period when safety A.J. Howard stripped the ball away from Sam Letton after a reception and returned the recovered fumble 71 yards for an adrenaline-reviving score that cut the lead in half.

Despite the heroics of the Sun Belt’s leading rusher, Moore had his personal streak of six consecutive 100-yard rushing performances snapped when he finished with 16 carries for 91 yards. Appalachian finished with 167 yards on the ground.

Troy missed a shot to take the lead as the half ended when Ryan Kay hooked his 43-yard field goal attempt just wide of the right upright.

The Mountaineers grabbed their first lead with 6:29 left in the third quarter when freshman Michael Rubino boomed a career-long 47-yard kick down the middle of the goal posts to make it 17-14.

That advantage survived until near the end of the third period when Silvers (21-of-35 passing for 229 yards, six carries for 56 yards) turned a read option run into his 51-yard scoring jaunt to push Troy back on top, 21-17.

The two highly-touted defenses controlled major portions of the second half, but Appalachian went ahead once more with Lewis making a one-handed catch of a throw that was behind him for one key first down and Lamb rumbling down to the Trojan 30 on a naked bootleg to set up Moore’s second score.

But Appalachian has conceded its hopes of winning the Sun Belt.

“There’s a lot of ball left to be played in college football season,” Satterfield explained. “We see the stuff that happens each and every week. We’ve got to take care of our business and that’s coming back at home next week playing a good Monroe team and winning the game. It’s about how we finish this season and we’ve got to finish strong.”