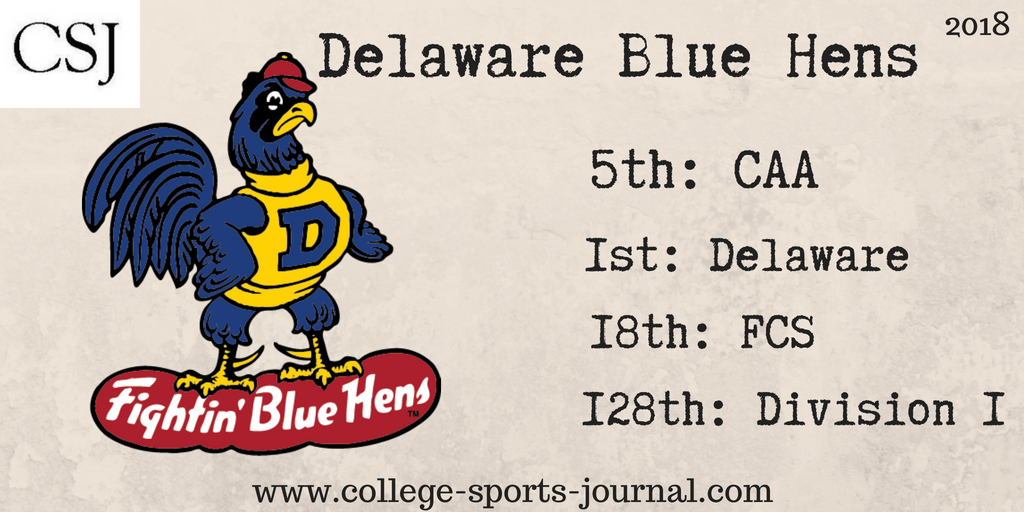 2017 In a Sentence: Delaware struggled on offense for most of 2017, especially at the quarterback position. The Blue Hens put up over 30 points only two times on the season, but they were especially strong on defense, only allowing under 17 points per game. Had they not lost their last game of the season to Villanova, they probably would have been a playoff team.

Biggest Shoes to Fill: DE Bilal Nichols was a force on the Blue Hen defensive line, earning first team all CAA honors and third team All American honors. Nichols was drafted in the 5 th round by the Chicago Bears. Despite being double teamed on most plays, Nichols still came away with 5.5 sacks and 9 pass breakups.

Key Player:Delaware played two quarterbacks throughout the 2017 season in 2017: QB Joe Walker and QB JP Caruso. Both struggled, completing only 51% of their passes for 1389 yards and scoring 8 TDs while yielding 9 INTs. With former 3rd string QB Pat Kehoe now firmly in the mix as well, the Blue Hens will need much better play from the quarterback position if they want to be a playoff team.

Fearless Prediction: The Blue Hens will start the season with three cupcakes at home, which should give whomever emerges at QB plenty of time to gel by the time they play a huge out-of-conference test at the FargoDome in North Dakota. The Blue Hens have the defense to make it back to the FCS playoffs, but do they have the offense to compete once they’re there?