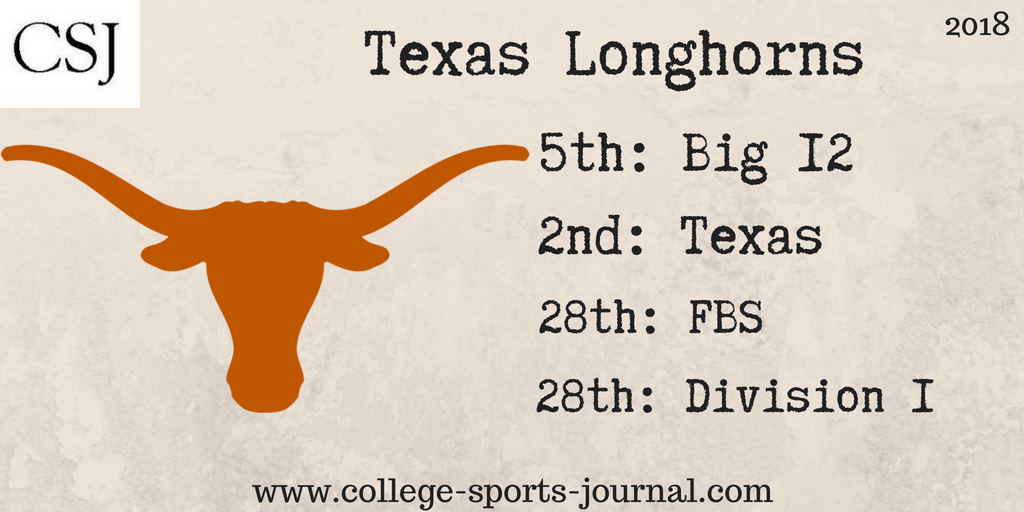 2017 In A Sentence: In an up and down season that saw Texas lose its opener to sub-.500 Maryland to winning the Texas Bowl over Missouri, new Coach Tom Herman led the Longhorns to a 7-6 overall mark–the first winning season since 2013.

Biggest Shoes to Fill: OT Connor Williams was an All-American in his sophomore season and had an injury plagued 2017 season in starting just five games. He decided to forgo his last season of eligibility this year and entered the NFL Draft where he was picked in the second round by the Dallas Cowboys.

Key Player: WR Collin Johnson is an All-American candidate this year and will try to be a leader on the offense where the quarterback play was up and down last year between two players in junior Shane Buechele and sophomore Sam Ehlinger–both of whom started last year. Johnson finished 2017 with 54 receptions with an average of 14.2 yards per catch.

Fearless Prediction: Texas left some wins on the table with close loses to USC, Oklahoma, and Oklahoma State. This year’s team will likely learn from these close losses and turn into victories but picking the quarterback and having consistent play from that position will be the key reasons why the Longhorns improve. Look for Texas to do just that and be in the running in the Big 12 late in the season.