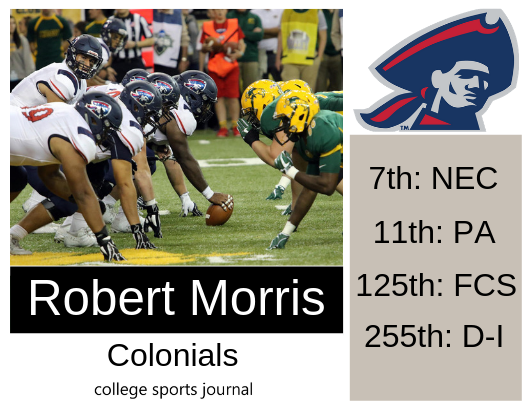 2018 In a Sentence: In Week 3, the Colonials fell 73-7 to perennial FCS power James Madison, and things didn’t improve much from there, with Robert Morris losing eight other games to their FCS opponents. Two wins over D-II opponents Virginia State and Central State were RMU’s only victories.

Biggest Shoes to Fill: LB Adam Wollett was one of the few bright spots for the Colonials last year, who led the team with 111 tackles and ended his senior season 5th on Robert Morris’ all-time list.

Key Player: TE Matthew Gonzalez broke out in 2018 with one of the best-ever receiving seasons in Colonials history. His 40 reception, 642 yard, 12 TD season was one of the best at the FCS level at the tight end position, and he’ll be leaned upon heavily once again in 2019 as well.

Fearless Prediction: On September 21st, Robert Morris will travel to Lexington, Virginia to take on the Keydets of VMI. It might be the Colonials’ best shot at their first Division I win since 2017, when Robert Morris beat VMI at home 21-0.