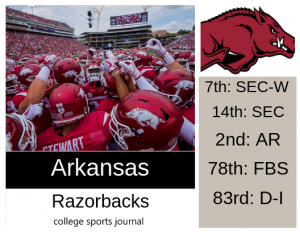 Biggest Shoes to Fill: QBs Ty Storey and Cole Kelly got out of Fayetteville after neither signalcaller was able to get Morris’ offense going at hall. Storey transferred to Western Kentucky and Kelly transferred to Southeastern Louisiana. Though they were ineffective, it won’t be easy to bring in two outsiders, QB Ben Hicks and QB Nick Starkel, to battle for the starting job.

Key Player: LB De’Jon Harris was bar none the best player on the Razorbacks last season, with 118 total tackles, 62 solo stops, and 9 tackles for loss. He’ll be looking to shore up his NFL draft stock with a strong senior season.

Fearless Prediction: It seems inevitable that the Razorbacks will improve over their rock-bottom season last year, with very winnable games at home against Portland State, Colorado State, San Jose State and Western Kentucky. Strange as it is to say, the Colorado State game might be a must-win for Morris’ long-term prospects as head coach. If they lose at home to the Rams again, he’s in deep trouble.