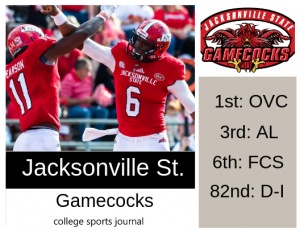 2018 In A Sentence: What wasn’t surprising about the Jacksonville State 2018 Season? That they won the Ohio Valley Conference title for the fifth year in a row with a 9-4 overall record. What was a surprise? How they did it. They actually lost a game to an Ohio Valley Conference and required a crazy game outcome between Murray State and SEMO to win the championship. Unfortunately for the Gamecocks, another unsurprising development based on recent years was an early playoff exit, where they were thoroughly embarrassed by Maine.

Biggest Shoes to Fill: Most fans don’t think the kicker is an important part of the football team until they need on to come through, right Minnesota Vikings fans? Jacksonville State loses an excellent kicker to graduation, PK Cade Stinnett. You couldn’t miss Stinnett’s 6-1, 270 pound frame on the field. He hit 10 of 16 field goals and 62 of 64 extra points in his senior year. When the playoffs come around and the Gamecocks need the big kick, will they have the guy to nail it? Key Player: QB Zerrick Cooper and WR Josh Pearson make up one of the most dangerous duos in all of the FCS. Both are on the preseason Walter Payton Award watch list, and for good reason. The pair connected 67 times for 1123 yards and 17 touchdowns in 2018. Cooper finished with 316 yards passing with 34 touchdowns as well as 366 yards on the ground and another six touchdowns. There is no reason these two can’t have an even better 2019.

Fearless Prediction: Jacksonville State is loaded this year. They return all of their skill guys from an impressive offense. The defense is also above average. This team has its sights set on a run to Frisco. The talent is there, but will the demons of playoffs past catch up with them again?