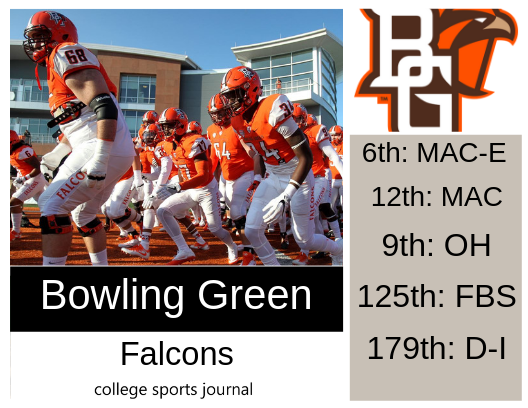 Biggest Shoes to Fill: QB Jarret Doege left to transfer to West Virginia following a good season in his sophomore year. He will have to sit out a year before he’s eligible but he threw for 2,660 yards and 27 touchdowns in a bright spot for the Falcons.

Key Player: RB Andrew Clair will need to step up following the transfer of Doege. The junior Clair ran for a team-high 702 yards and five scores, and and also caught 19 passes with two touchdowns. He is a quick back and a quick strike type of runner and will need to put up bigger numbers in what should be a more run orienated offense this year.

Fearless Prediction: New Coach Scott Loeffler comes to the Falcons from Boston College where he was the offensive coordinator. He knows how to get a whole lot out of the talent he gets to deal with. There’s talent and upside at the offensive skill spots, helped by promising QB Grant Loy. The defense, which allowed 200 yards rushing or more in ten of the 12 games and will need to step up to improve upon the three wins from a year ago. The Falcons will improve but not more than a game or two in the win column.