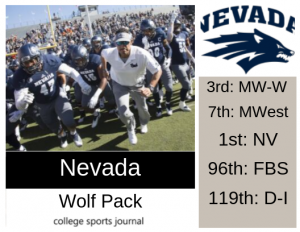 Biggest Shoes to Fill: Malik Reed was an absolute beast of a defensive player and will be sorely missed this season. With Reed graduated, that leaves a gap of productivity bigger than what the average player can fill. Reed produced 77 tackles, 15.5 TFL, 8 sacks, 4 forced fumbles, and 2 recovered fumbles. An upside is the defense returns the other two leading defensive players from last year. The downside is figuring out how to distribute the new work load.

Key Player: Toa Taua is an unlikely hero in what was a good, but not great last season. Nevada still is deciding on a starting quarterback, but it does not look good for them. Senior QB Christian Solano broke his hand in practice ruling him out till early October. Malik Henry, the Netflix star QB, is dealing with a “day-to-day” hamstring injury leaving him as a question mark. Carson Strong is the stronger of the two freshmen quarterbacks on the roster, but will have to grow up fast. There is a Sacramento State quarterback with limited experience on the roster, but his eligibility is still hung up in paperwork for now. Considering all of that drama for who is supposed to lead the team, it may be time for Taua to lace up his shoes and have a breakout season while the quarterbacks continue mingling.

Fearless Prediction: The Wolf Pack can expect similar results at the end of this season. In non-conference, Nevada will be 2-2 as an FCS Weber State and cupcake UTEP should fall easier than the likes of Oregon or Purdue. In conference, Nevada can likely go 5-3 with Utah State, Fresno State, and San Diego State being their roadblock losses.