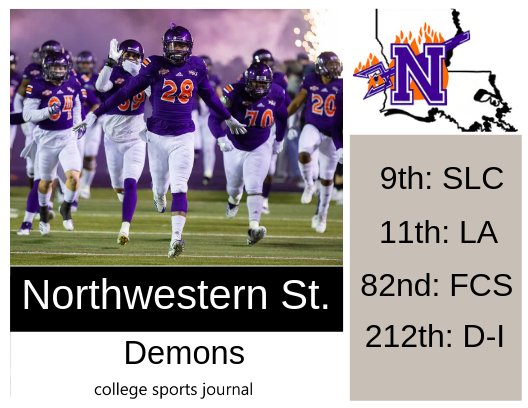 2018 In A Sentence: Northwestern State was a 5-6 team overall but did win three of its last four and was just three points shy of NSU’s first winning season since 2008 in Coach Brad Laird‘s first season in Natchitoches. They played in a number of very competitive games, including a double OT win over a ranked McNeese State.

Biggest Shoes to Fill: WR Jazz Ferguson made the rare decision by an FCS player to leave school early for the NFL draft. He was surprisingly bypassed on the final day of the NFL Draft, but the FBS LSU transfer, however, quickly reached agreement with the Seattle Seahawks shortly after its conclusion. He was named the Southland Conference and All-Louisiana Offensive Player of the Year after averaging 101.5 receiving yards in 11 games with 66 catches for 1,117 yards and 13 touchdowns.

Key Player: S Hayden Bourgeois will enter his junior season this year after being named to the All-SLC First Team last year. He ranked third in the FCS in total takeaways by recording five interceptions and recovering two fumbles. He also blocked a field goal that forced a second overtime, paving the way for a Ferguson touchdown catch that helped lead to a win over McNeese.

Fearless Prediction: The second season under Coach Laird could lead to the first winning record for the Demons since 2008. With a fairly wide open Southland Conference, the Demons are not fair away from the top half of the league and with 13 starters back including QB Shelton Eppler, who led the Southland with 26 touchdown passes, two shy of the school record. But unless they make a big step up, Northwestern State looks to be hovering in mediocrity.

Look for another middling season from the Demons and bottom third finish in the conference.