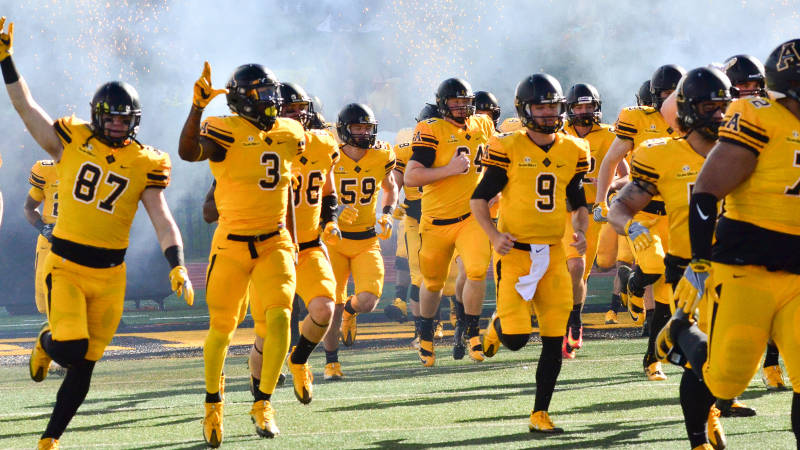 TROY, Ala. — It was probably the most important game of the Scott Satterfield coaching era, two years ago when Appalachian State played Troy at Veteran Memorial Stadium.

Coming off a 4-8 campaign in Satterfield’s first year as a head coach, the Mountaineers had dropped five of their first six games during the 2014 season and looked bad doing it.

App State’s lone win had been against a non-scholarship Football Championship Subdivision from Campbell University and the Mountaineers were coming off a disastrous 55-48 overtime loss at home against FCS Liberty.

Something needed to change and needed to improve fast in the seemingly bleak Appalachian program.

“Things didn’t start out very good,” Satterfield admitted, as he watched his Mountaineers commit a pair of 15-yard penalties and fall behind 7-0 within the first six minutes at Troy.

But then came an offensive explosion for ASU that led to 24 unanswered points on the way to a 53-14 victory over the Trojans. Things haven’t been the same since for the Mountaineers.

When App State (7-2 overall, 5-0 in league) meets Troy (7-1, on Saturday at 3:30 p.m. Eastern Standard Time, the Mountaineers will be playing in a game that will likely decide the Sun Belt Conference championship.

The 2014 in over Troy started a six-game winning streak for App State the rest of the season and the Mountaineers followed that up with an 11-2 mark in 2015 that included a second-place finish to Arkansas State in the Sun Belt and that last-second, 31-29 victory over Ohio University in the Camellia Bowl.

Since starting that winning streak at Troy that year, Appalachian is 24-4 overall, 18-1 in the Sun Belt and 13-2 away from home. The Mountaineers are closing in on a conference record with nine consecutive league road wins and those two road losses came against two college football giants, Clemson and Tennessee.

As comfortable as ASU has been in the friendly confines of Kidd Brewer Stadium over the years, the Mountaineers have learned to thrive even more as road warriors.

“In the past few years, we have loved being on the road,” Satterfield said. “We’ve had a lot of special times. The players really love being together on the road. There is more comradery.”

Appalachian seems to play with a relaxed comfort level in rod venues that is the same whether the Mountaineers are playing before 100,000 fans at Tennessee’s historic Neyland Stadium, or before a restrained environment like they did earlier this season at Akron.

But ASU will need all of that confidence on Saturday when it meets up with Troy for just the sixth time in history in what has been a memorable series.

As two of the powerhouses of FCS, App State and Troy split two games in 2000, the Trojans taking an exciting 34-28 win in ASU’s home opener before the Mountaineers stunned third-seeded Troy in the first round of the playoffs in what was the Trojans’ final game before moving the Football Bowl Subdivision.

After winning that program-turning game at Troy in 2014, the Mountaineers survived for an incredible 44-41 triple-overtime victory last season in the longest game ever at Kidd Brewer Stadium.

Following up a 4-8 record last season, second-year coach Neal Brown has turned the Troy’s fortunes around in 2016. The Trojans have won seven of eight games, with their only lose being a surprisingly close 30-24 setback at Clemson.

“They are a very solid team all the way around,” said Satterfield. “This will be the biggest challenge we’ve had this year (since Miami).”

“This team stretches you,” Satterfield said. “If you load up to stop the run, they can beat with the pass. If you focus on stopping the pass, they can beat you with the run.”

Appalachian counters with an attack that features two of the best runners in the conference, Jalen Moore and Marcus Cox. That pair has 10 100-yard rushing performances between them this season, including six in a row for Moore — the leading rusher in the league.

The Mountaineers have also been improving with the pass each week as a crop of young receivers comes to harvest. There is also the big-play combination of quarterback Taylor Lamb and receiver Shaedon Meadows.

ASU now believes it can beat teams either with the run, or the pass.

“With Troy coming up, it good to have that confidence (in the passing game,” Lamb said.

This contest will also feature the two best defenses in the Sun Belt.

But if the Trojans have a weakness, it may be on pass defense, where Troy ranks last in the conference.

The best quote of the week about this game may have come from Troy defensive coordinator Vic Koenning about App State:

“Their attitude is such that they want to make (it) an MMA, or whatever that is, fight,” Koenning told the Montgomery Advertiser this week. “They want to stand toe-to-toe with you and beat your tail and see what you got.”

Are you listening to the pre-game hype, ASU center Parker Collins?

Whatever it takes in this heavyweight showdown, the Mountaineers want to erase the bad taste left from last season’s lone Sun Belt loss to Arkansas State — a game that cost App State the Sun Belt title.

“We know it’s definitely going to be a challenge,” said ASU linebacker John Law. “We definitely are looking forward to it. We enjoy a challenge.”