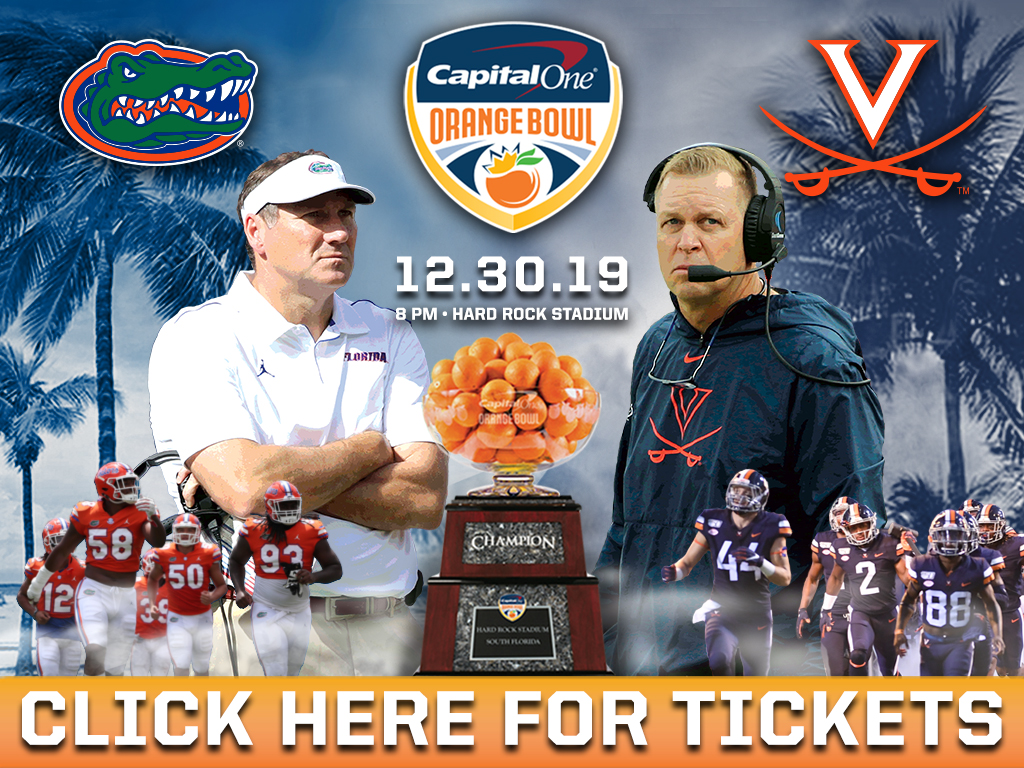 UF ranks 17th nationally in passing offense (300.4 yards per game), which is the first time in nearly two
decades it has thrown the ball that consistently. UF’s highest national finish in passing offense since the start
of 2010 is 79th (in 2016), and it finished outside the top 100 in four of the nine seasons from 2010-18.

Florida has been one of the best teams in the nation this season when it comes to rushing the passer, as it
ranks 5th nationally with 46 sacks — which leads the SEC by a whopping 13 sacks and is its highest season
total since posting 53 in 1997.

Key Player: DE Jonathan Greenard is Florida’s top disrupter in its front seven, as he leads the SEC in both sacks (8.5) and tackles for loss (14.5) despite missing time with an ankle injury. At Missouri on Nov. 16, Greenard totaled five tackles for loss (including two sacks) — UF’s highest single-game total since Alex Brown had five TFLs (all sacks) against Tennessee in 1999.

The game will mark Virginia’s first appearance in the Orange Bowl. The Cavaliers are 9-4 overall and the ACC Coastal Division champion. The Orange Bowl will mark UVA’s 21st bowl appearance and third consecutive under fourth-year head coach Bronco Mendenhall.

Virginia and Florida have only met one previous time when the Cavaliers visited then-No. 19 Florida one Oct. 3, 1959 at Ben Hill Griffin Stadium. The Gators were victorious, 55-10.

The Orange Bowl will mark the fourth bowl game Virginia will play at Hard Rock Stadium. The Cavaliers also played in two Carquest Bowls (1994, 1996) and one MicronPC Bowl (1999) at the venue.

“We are excited to welcome the University of Virginia to the 86th Capital One Orange Bowl and a great matchup with Florida,” said Orange Bowl president and chair José Romano. “Congratulation to Coach Mendenhall and the entire Virginia football on an outstanding season. Virginia is one of four ACC teams to have never played in our game, and we are looking forward to providing them with the world-class bowl experience that the Capital One Orange Bowl is known for.”

Key Player: Virginia begins and ends with QB Bryce Perkins, who, through 13 games, has already broke his own UVA record for total offense (3,960) and also broke Kurt Benkert’s (3,207) UVA single-season record for passing yards (3,215). A dangerous dual threat, he’s put up plenty of numbers on a tough ACC schedule, but freshest in most people’s minds are how easily Clemson contained him in the ACC Championship game, a 62-17 humbling.

Chuck: Florida are huge favorites in what is essentially a home game for them, but Virignia could surprise here. Perkins is no slouch. Expect this bowl to be decided late. Florida 32, Virginia 23