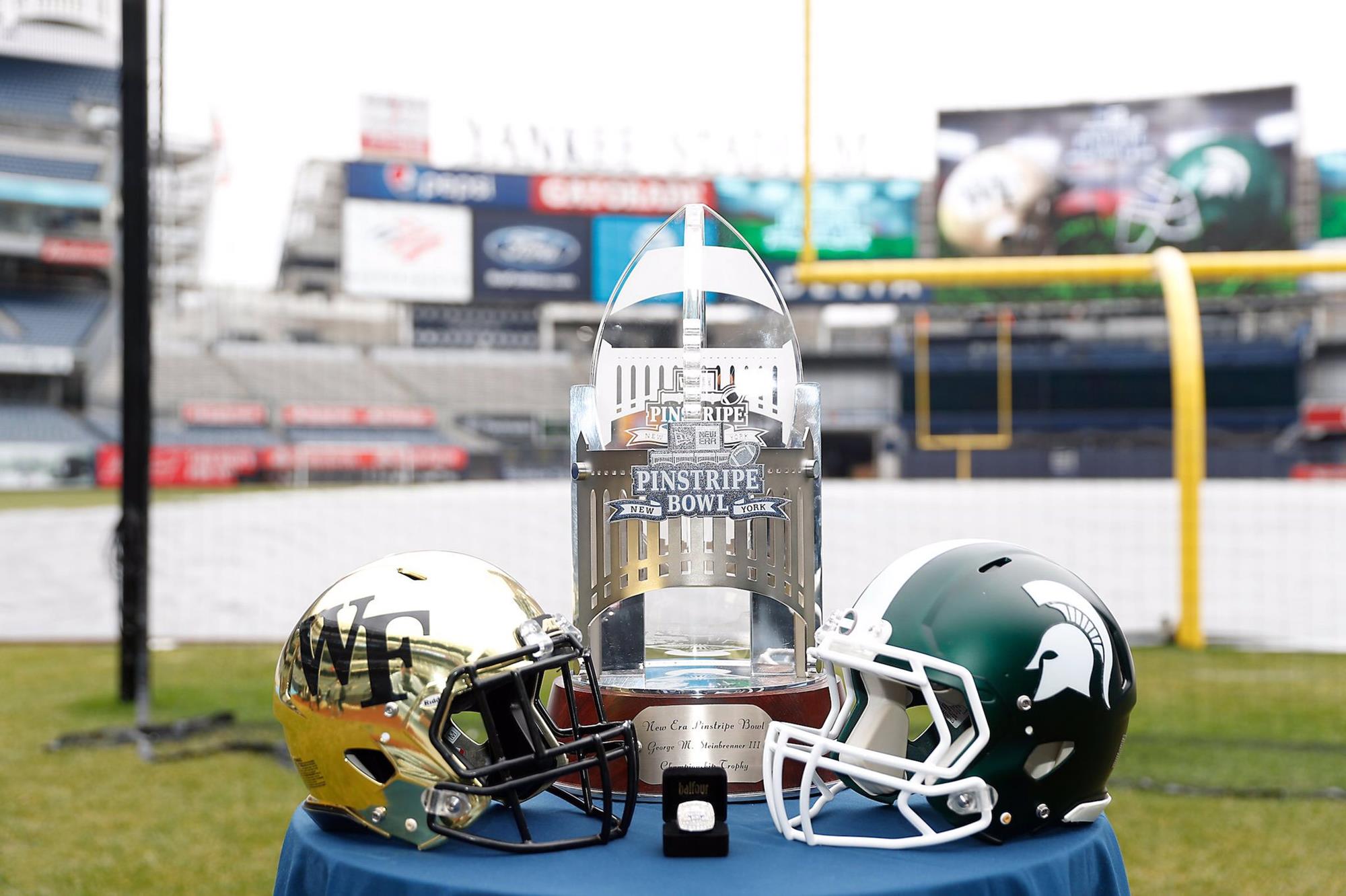 Michigan State is making its 29th all-time appearance in a bowl game and its 12th under head coach Mark Dantonio, the most bowl games of any coach in program history. MSU set a school record with nine consecutive bowl appearances from 2007-15, including a school-record four-game winning streak (2011 Outback Bowl over No. 18 Georgia; 2012 Buffalo Wild Wings Bowl over TCU; 2014 Rose Bowl over No. 5 Stanford; 2015 Cotton Bowl over No. 4 Baylor). MSU is 12-16 all-time in bowl games and 5-6 under Dantonio. Dantonio’s five bowl wins are also a school record and are tied for sixth most in Big Ten history. MSU has won five of its last seven bowl games.

In a way it’s very fitting that Michigan State returns to the Bronx to play a football game, as there is an amazing Michigan State and Fordham connection. The Spartans’ first trip to the Big Apple came on Oct. 22, 1932, in New York’s Polo Grounds against Fordham. Jim Crowley, one of Notre Dame’s immortal Four Horsemen, was Michigan State’s head coach during the Spartans’ 19-13 upset win over the previously unbeaten Rams in what would be his fourth and final season in East Lansing. He left to become Fordham’s head coach in 1933, becoming the architect of the “Seven Blocks of Granite,” and compiled a 56-13-7 record in nine seasons for the Rams from 1933-41.

Fifth-year senior QB Brian Lewerke is slated to start his 38th and final game at quarterback for the Spartans, but Dantonio is likely to put in one or more of the underclassmen in at some point for a drive or two to set up the QB competition for next season. It’s unclear, however, which QB that will be.

Key Player: DE Kenny Willekes has had a great football journey from former walk-on to one of the more dominating defensive players in the Big 10. With 14 1/2 tackles and 9 sacks, he’s going to want to really use this game as a showcase for his talents. 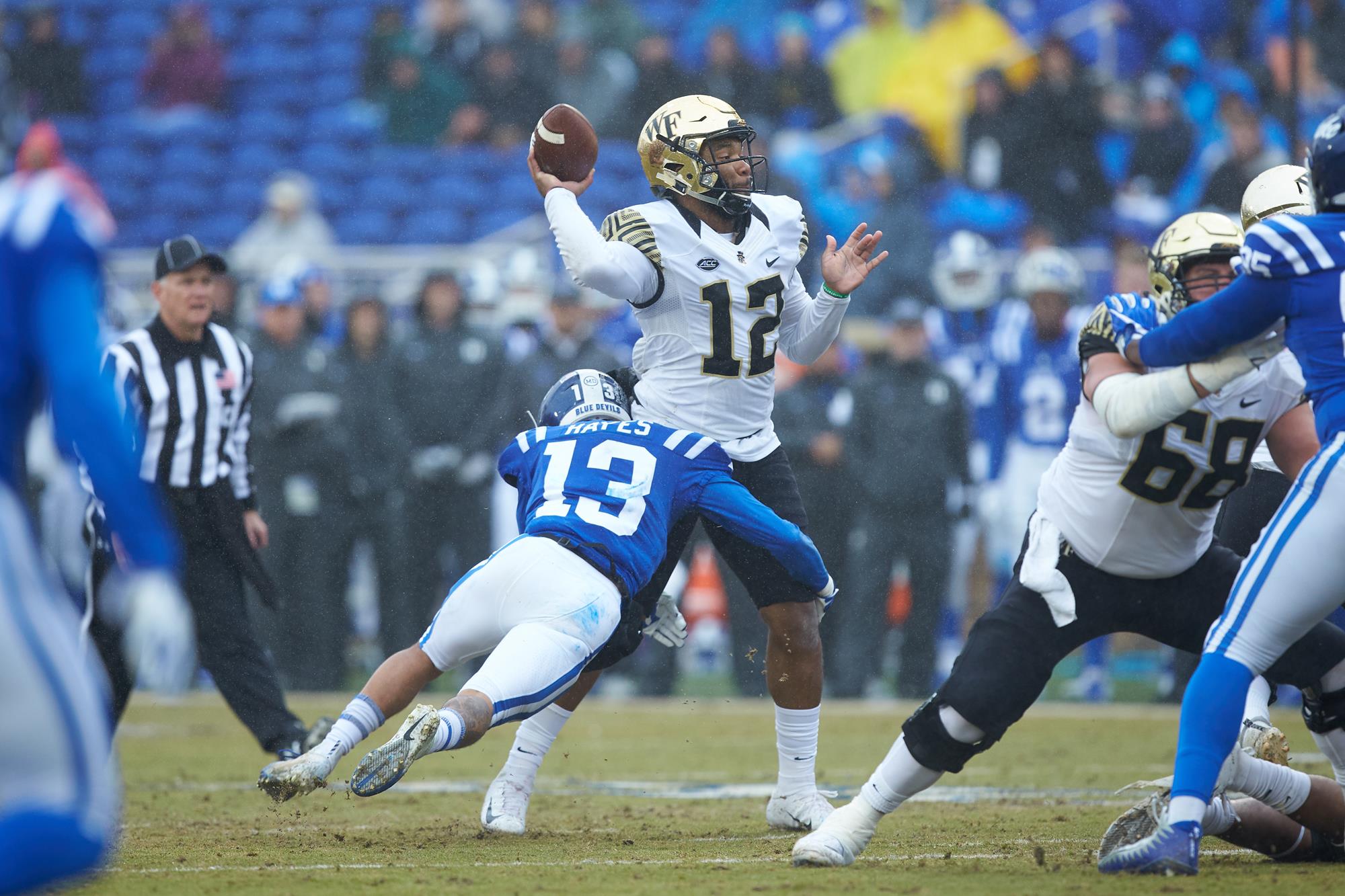 Wake Forest’s season at 8-4 was another great year for head coach Dave Clawson and the team. Since he’s arrived in Winston-Salem, the Demon Deacons have appeared in three straight bowl games – all victories – and are about to take part of their fourth.

Clawson has made a reputation of getting diamonds in the rough who develop into all-ACC players. Jessie Bates, Greg Dortch, Cam Serigne and Phil Haynes didn’t each pass up dozens of other Power Five offers to come to Wake Forest, but were identified by the staff, had terrific careers with the Deacs and then found their path to NFL contracts.

They’ve also done a great job of winning games against in-state competition. This year they beat Duke 39-27, North Carolina 24-18, and NC State 44-10, though perhaps that focus has led to a couple head scratcher losses like to Louisville (62-59) and Syracuse (39-30) that erased the potential of a 10 win season.

One huge reason why Wake Forest ended their season with some losses was that WR Sage Surratt was lost to injury, their best offensive player. That won’t ground the Deacon offense completely in this bowl game, but it will be missing a huge weapon.

Key Players: QB Jamie Newman has been the main signalcaller for the Demon Deacons and has been an effective dual-threat quarterback, with 23 passing TDs (vs. 10 interceptions) with 2,693 yards passing and 487 yards rushing. He will be challenged greatly by Michigan State’s defense.