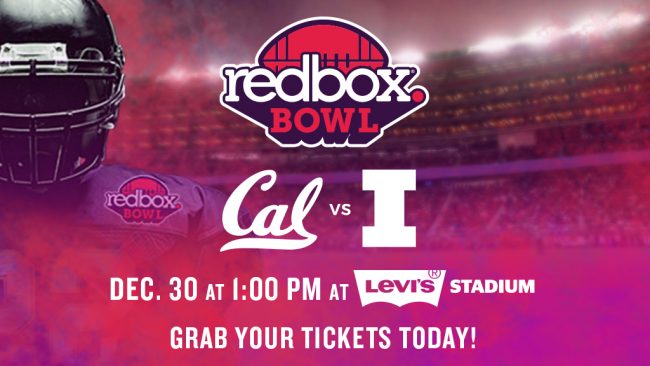 What is now known as the Redbox Bowl has long attracted many of the marquee schools in college football with Florida State, UCLA, Southern Cal, Nebraska and Michigan State among the schools that have appeared at least once in the history of the bowl.

Since 2014 the game has featured teams from the Pac 12 and the Big Ten. Colorado and Washington State are the only Pac-12 schools which have not taken part in at least one game.

Bowl History: This marks Cal’s 24th bowl appearance and the Golden Bears are 11-11-1 in their previous 23 bowl games dating back to the 1921 Rose Bowl when they defeated Ohio State 28-0. Cal’s tie came the following year when the Bears and Washington & Jefferson battled to a scoreless tie in the 1922 Rose Bowl.

California dropped a 10-7 decision to TCU in the Cheez-It Bowl last season.

Coach: Veteran coach Justin Wilcox has restored some of the glamour to the California program since being named the head coach of the Golden Bears prior to the start of the 2017 season and is taking Cal to a third straight bowl game. California is 19-18 under Wilcox heading into the bowl game against Illinois.

Wilcox, who played defensive back while attending college at Oregon, began his coaching career as a graduate assistant at Boise State (2001-02) before becoming an assistant at Cal for three seasons (2003-05). He returned to Boise for four more seasons (2006-09) and worked at Tennessee (2010-11) and Washington (2012-13). His Pac-12 ties run even deeper. He was an assistant at Southern Cal for two seasons (2014-15) before spending the 2016 season as an assistant at Wisconsin prior to taking the California position. He has been on the staff as a grad assistant, assistant or head coach for 16 bowl games, including the game against the Illini.

A 1999 graduate of Oregon, Wilcox, is the son of Pro Football Hall of Fame linebacker Dave Wilcox, who starred for the San Francisco 49ers (1964-74) His uncle, John, played for Philadelphia in 1960, and a brother, Josh, played two seasons (1998-99) with the New Orleans Saints.

2019 Season: The 2019 season started off well for the Wilcox and the Golden Bears. They won their first four games of the season and climbed to No. 15 in the national rankings.

2019 Golden Bears: The four-game losing skid by Cal did some damage to the offensive numbers in 2019. Heading into the bowl game the Bears are averaging just 323 yards of total offense, making a No. 15 national ranking a distant memory. Cal averages just 132.3 yards rushing on the year and just 190.8 yards through the air. The Bears score at a clip of 20.1 points per game.

The defense, which yields 22.1 point per game, appears to rely on its ability to stop the run. Cal gives up an average of just 123.1 yards on the ground, but the pass defense appears to be a bit suspect, giving up an average of 261.8 yards per contest.

Key Players: Cal has a pair of quarterbacks who could see playing time against Illinois. Devon Modster (6-2, 210), a transfer from UCLA, is listed as No. 1 on the depth chart for the bowl game. He has appeared in six games this season for the Bears and has completed 62 of 122 passes for 705 yards and five touchdowns. He has also thrown five interceptions.

Chase Garbers (6-2, 205) has appeared in eight games on the year and has thrown for 1,500 yards after completing 109 of his 184 pass attempts for 10 touchdowns against just three interceptions.

There was a time Cal, like many other Pac 12 teams, had a solid running attack. Not this year in Berkeley.

Christopher Brown (6-1, 230), a sophomore, has rushed for a team-best 794 yards on 188 carries (4.2 ypc) and has scored eight times. He has proven himself to be versatile though. Brown has caught 19 passes out of the backfield for 149 yards and a team-high three touchdowns.

Weaver leads the nation in tackles with a staggering 173 (95 solo) tackles, including 10.5 for loss along with 2.5 sacks. He has also forced three fumbles this season. Deng, meanwhile, has also posted impressive numbers. He has 111 (53 solo) tackles of his own, 7.5 of which have been for loss, along with three sacks. Deng is a transfer from Virginia Military Institute.

Bowl History: Illinois is making its 19th bowl appearance in school history, but the first under Lovie Smith and the Fighting Illini are looking to get back in the win column against the Golden Bears.

Illinois has not been to a bowl game since losing to Louisiana Tech 35-18 in the 2014 Heart of Dallas Bowl. That loss snapped a modest two-game winning streak in bowl games by the Illinois.

Illinois, which won the Rose Bowl each of the first three times (1946, ‘51, ’63) playing in that storied contest, has an 8-10 record in its previous bowl appearances.

Coach: Imagine, if you will, the television character Tattoo, from Fantasy Island. “Da beard, da beard.”

No, actually it’s Lovie Smith with his trademark beard that makes him one of the most recognizable faces in college football.

Smith, who spent 19 seasons in the National Football League, including stints as head coach with the Chicago Bears (2004-12) and Tampa Bay (2014-15), is in his fourth season at Illinois.

After opening the season with wins over Akron (42-3) and Connecticut (31-23) things only got worse for the Illini. Smith’s squad dropped the next four games, including three in Big Ten Conference play.

Then came one of the story-book endings in college football history as Illinois got a field goal from James McCourt as time expired to defeat then-No. 6 Wisconsin 24-23 on Oct. 19.

The win over the Badgers began a string of four straight wins for Illinois as the Illini defeated Purdue (24-6), Rutgers (38-10) and Michigan State (37-34) to become bowl eligible. The win over the Spartans saw Illinois use a 27-3 fourth quarter explosion en route to the win. It was the largest comeback in Big Ten play in the last 40 years.

Losses to Iowa (19-10) and Northwestern (29-10) closed the regular season and the Illini are hoping to snap that skid with a win over the Golden Bears.

2019 Fighting Illini: Illinois’ offense, as evidenced by the four-game losing skid midway through the season, does not have much to brag about on offense. Mediocre might be the best way to describe it. The Illini average just 142.4 yards rushing and 177 yards passing this season. That offensive output is nearly 100 yards fewer than what the Illinois defense is allowing.

The Illini give up 201.6 yards per game on the ground and yields 208 passing yards.

Key players: Brandon Peters (6-5, 220), a junior, is the quarterback for the Illini. He has completed 130 of 238 passes for 1,611 yards and 17 touchdowns this season against just seven interceptions.

If Cal’s Weaver has a clone, it just might be Illinois standout linebacker Dele Harding (6-1, 230), who, like Weaver, has put up incredible numbers this season. Harding, a senior, has 147 (64 solo) tackles, including 13 TFLs and three interceptions. Jake Hansen (6-1, 225), another linebacker, has 72 (41 solo) tackles to his credit, along with three sacks.

Sydney Brown (6-1, 210) and Stanley Green (5-11, 190) gives Illinois a set of quality players in the secondary. Brown has 80 (43 solo) tackles this season, along with three interceptions. Green has contributed 69 (40 solo) tackles in his final collegiate season/

Ray: Both teams have been a Jekyll and Hyde at times this season and the outcome will rest solely on which team can keep Jekyll at bay for one more day. It figures to be one of those games where anything can happen and just might come down to whoever has the ball last. McCourt may get a chance to shine once again for the Illini. Illinois 27, California 25

Chuck: This could be another low-scoring affair as two pretty strong defenses take the field. It might be a case of “home field advantage” being the difference. California 20, Illinois 13