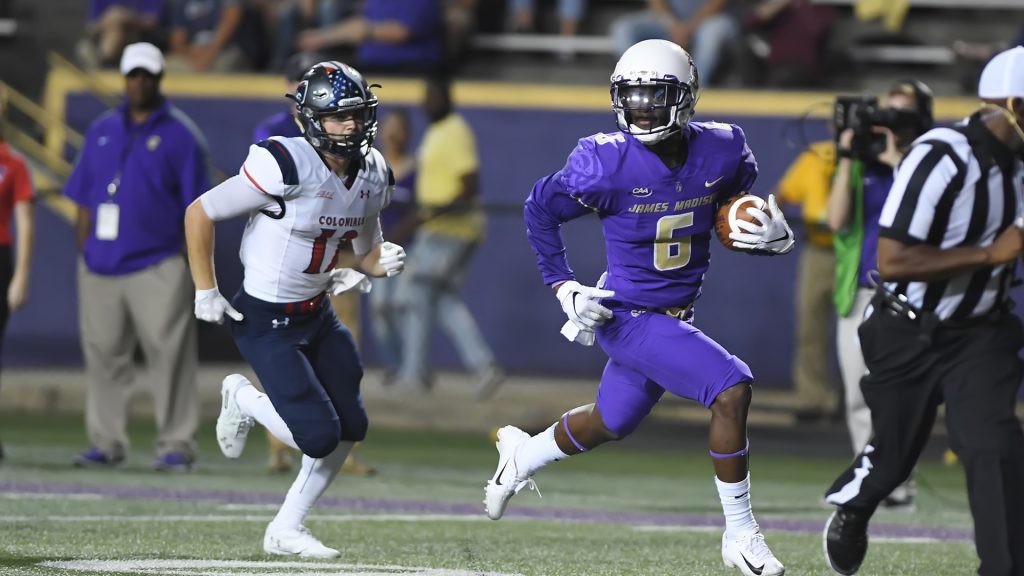 Harrisonburg, VA – James Madison got what he wanted this week: play 4 quarters and get experience for much of his young roster. The Dukes jumped ahead of Robert Morris early and often, rolling to a 73-7 win in the team’s home opener in Harrisonburg Thursday night.

Less than three minutes into the game, Marcus Marshall took a touch pass around the left end for a 39 yard touchdown. On the next Dukes possession, Ben DiNucci dive in for a one yard touchdown to extend the Dukes early lead. Still in the first quarter, DiNucci picked up his first passing touchdown as a Duke with a 15 yard strike to a wide open Kyndel Dean in the back of the end zone. It was Dean’s first collegiate touchdown. The Dukes led 21-0 after one quarter of play.

It was more of the same for the Dukes in the second quarter as they put up another 31 points. DiNucci had a highlight reel 17 yard touchdown run and a perfect fade pass to Riley Stapleton in the quarter. Jimmy Moreland set a James Madison record with his 15th career interception, passing former Duke and current Green Bay Packer Raven Green. Moreland scored on the interception after jumping the route. Percy Agyei-Obese provided the final halftime margin on an 80 yard run when he broke through the right side of the line.

The second half started the same way the first half ended for James Madison. Marshall added his second touchdown of the day. This one was an 81 yard touchdown run that saw Marshall break multiple tackles on his way to the end zone. Juwon Hamilton score his first touchdown for the Dukes after transferring from Central Florida.

Houston emptied the bench, which allowed the sixth running back on the team’s depth chart, Eric Kirlew to get five carries in his first collegiate action. Kirlew scored on a 15 yard run that provided the Dukes with the final margin of victory.

For the Colonials, running back Terence Stephens had a solid game. Stephens had 69 yards on 17 carries and scored the only touchdown Robert Morris put on the board.

James Madison finished the game with 667 yards of total offense including 386 yards on the ground. The Dukes had six touchdowns of at least 15 yards in the game, showing off their big play ability. DiNucci finished 14 of 17 for 184 yards and 3 touchdowns in only a half of work. Cole Johnson played most of the second half, going 5 of 8 for 83 yards. Third string quarterback played the last drive of the game for his first taste of action.

With the win, Mike Houston became the fastest coach in school history to 30 wins, needing only 33 games to get to the mark.

Next week, the Dukes open CAA play with William & Mary when the Tribe come to Bridgeforth in Jimmye Laycock’s last visit to the valley. Earlier this summer, Laycock announced that this would be his last season as the head coach of the William & Mary football team.