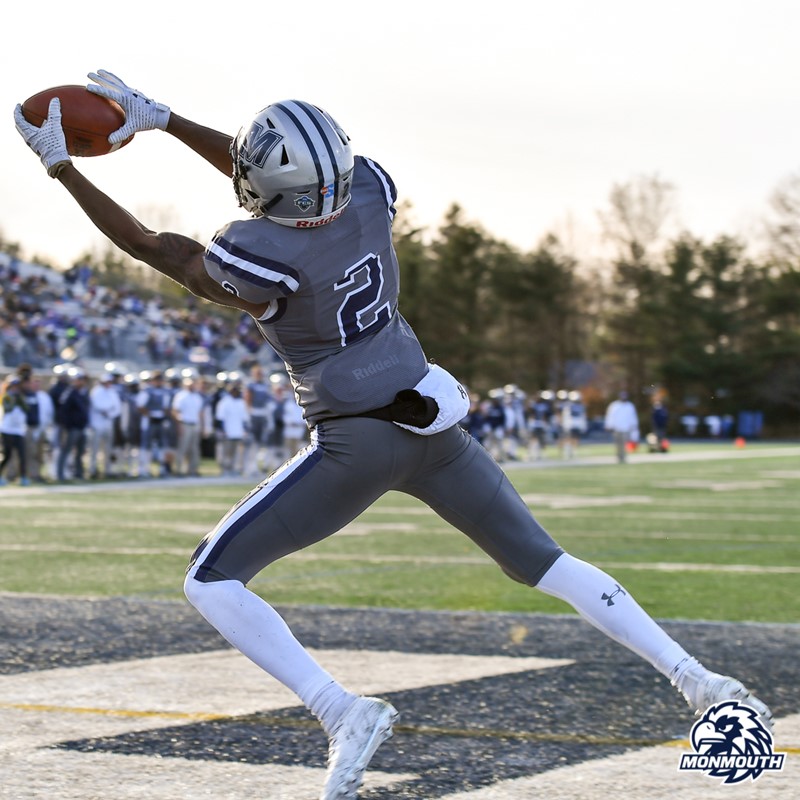 WEST LONG BRANCH, NJ – Monmouth piled up 502 yards of total offense as the Hawks (11-2) beat Holy Cross 44-27 in the first-ever FCS Playoff appearance for the program and the only head coach they have ever had, Kevin Callahan.

Early on, it looked like Holy Cross (7-6) might be able to stifle Monmouth to some degree, forcing the Hawks to punt on their first two possessions. But Crusader QB Connor Degenhardt’s first interception, made by an alert play by LB Evan Powell, seemed to be the play that started the waterfall of offense for Monmouth.

Four plays later, WR Lonnie Moore would score on an end-around to give the Hawks a lead they would never relinquish.

With a 10-0 lead, Powell would intercept a second pass from Degenhardt which would set up QB Kenji Bahar’s first touchdown pass on the afternoon, a 20 yard pass to Terrance Greene to make it 17-0.

Soon thereafter RB Pete Guerriero would bust loose for a 68 yard touchdown run, making the score 23-0 and the rout was on. The Crusaders would keep battling to the final whistle, eventually putting up 27 points, but the outcome was not in doubt most of the game.

“We are obviously very excited for this win today,” Callahan said afterwards. “It is the first time Monmouth has advanced in the NCAA Tournament, and the first eleven win season that we’ve had in our history, and I couldn’t be any happier and prouder of this group of guys. It was a very good effort all away around. As in most games, there are spots where we can player cleaner and better but I am extremely happy with the win. Going into the game, we thought it was important that we generate turnovers on defense and we did do that.”

Guerriero had a monster day, rushing 31 times for 220 net yards and 3 TDs, while QB Kenji Bahar had a mistake-free day with a touchdown pass and 249 yards through the air. For Holy Cross, RB Domenic Cozier ended with 97 net yards rushing while backup QB Matt Considine threw for 196 yards and three touchdown passes.

It was a great run this fall and there is plenty to be proud of. Here is a look back at the final game of the year for your @PatriotLeagueFB champion Crusaders. #GoCrossGo pic.twitter.com/y2WaBAzNuC

Monmouth will next travel to Harrisonburg, Virginia to take on No. 2 overall seed James Madison next Saturday.