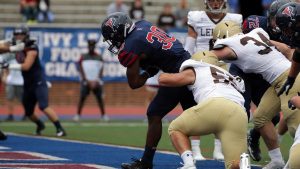 That was the overriding message coming out of the Lehigh postgame press conference at Penn this Saturday.

It came out of the mouth of head coach Andy Coen, and also, in so many words, from starting QB Brad Mayes and the current leader in tackles on defense, LB Mark Walker.

And it came after an extremely frustrating 30-10 loss to Penn, a game that seemed very winnable when the Mountain Hawks returned to the locker room at halftime but didn’t turn out that way.

To a nation of Lehigh fans, accustomed to seeing high-powered offenses and old-fashioned shootouts, seeing the Mountain Hawk offense struggle to score points could be as foreign a concept as Navy’s speed triple-option last week.

“We’re trying to move up and down the field, we’re getting a six yard gain, then a penalty that knocks us back,” Coen said after the game. “As long as I’ve been coaching, I’ve never seen us have five or six procedural penalties on the offensive line. It was not a good day. You can’t win when those things happen.”

Lehigh had 6 penalties for 38 yards on the afternoon, but it seemed like every one of those penalties put the Mountain Hawk offense in a 2nd down and long situation or negated a big play. Not Doing the Little Things

“We’re not going to be successful if we don’t all the little things,” Coen continued. “We constantly talk about doing the little things. John Wooden started every practice by having his players start by tying their shoes, so they knew they were doing the right thing from the very beginning. Maybe we need to start our practices by having out players put on their cleats the right way.”

Mark Walker, who co-led the defense with 10 tackles, agreed with coach Coen’s assessment when asked about some of the big plays that set up Penn’s scores, the final one being a 75 yard touchdown run by Quaker RB Karekin Brooks that gave him 183 yards rushing on the afternoon and officially put the game out of reach.

“Paying attention to details,” he said. “The defense needs to play with a little bit more passion, together a bit more so that the big plays don’t happen. At some point I think the offense is going to figure it out, and there’s a lot of season left.”

The defense did keep the Mountain Hawks in the game. Lehigh held Penn to 4-for-14 on 3rd down conversions, and forced 8 Quaker punts.

And there were times when the Lehigh offense seemed like it was on the verge of getting back in gear – most notably at the end of the first half, when Mayes went 6-for-8 passing on a 9 play, 73 yard drive ending with a 21 yard touchdown pass to WR Luke Christiano.

But it seemed like as the mistakes mounted in the second half, the frustration seemed up bubble up more and more.

As good as some of the statistics looked defensively, when Lehigh did give up a big play and were on the back foot, it seemed like Penn did an excellent job pouncing on the imbalance, with quarterback Ryan Glover quickly following up a 27 yard pass to Christian Pearson with a quick-snap run up the middle to get a big 17 yard rushing touchdown.

And on offense, Lehigh couldn’t convert many third downs either, converting 4 of 16 3rd downs and only scoring once – a 23 yard Ed Mish field goal – in two trips to the red zone.

The overflow point seemed to happen when, down 20-10 the Mountain Hawks seemed to have a long pass completion from Mayes to WR Sasha Kelsey, which would have set up Lehigh in the red zone with a chance to cut the deficit to 3.

But the play was sent to be reviewed, where it was determined that Kelsey had bobbled the ball and not come down with the ball cleanly.

In the ensuing chaos, the ball was spotted at the Lehigh 45 – not the Penn 45, which was where it should have been – and on the very next play, Mayes forced up a pass, which was promptly picked off by Penn FS Jacob Martin.

“We just keep shooting ourselves in the foot,” a visibly upset Brad Mayes said. “We’ve got to stop it. There’s nothing else that’s wrong with us. Every time we get a good play, the next play seems to be bad for some reason.”

Running For His Life

Part of the issue was Penn’s pass rush. Mayes was sacked seven times, three of them coming in the red zone when the Mountain Hawks were on the brink of scoring.

“I didn’t feel like myself, and that happens against a good defensive line,” Mayes said. “We played three good defenses before we played this one, so I thought that would help us out a little bit. But the difference was how technically sound Penn was. They’re not as big as Villanova and they’re not as big as Navy, and not as physical, but they didn’t make any mistakes.”

In a game where Lehigh felt like they wanted to send a message, the Mountain Hawks into the bye week sent the message that they instead intend to regroup and fix what’s wrong – if they can.

“We’re just not hitting on all cylinders and we haven’t from the first game on, “ Coen said. “The passing attack has not been what it had been in years past. We have to find a way to fix it.”

Lehigh will look for answers during the next two weeks.

“I just wish we could get back to having fun,” Mayes said. “Since I’ve been here, this is not the Lehigh offense. We just have to get back to practice and use the bye week effectively.”