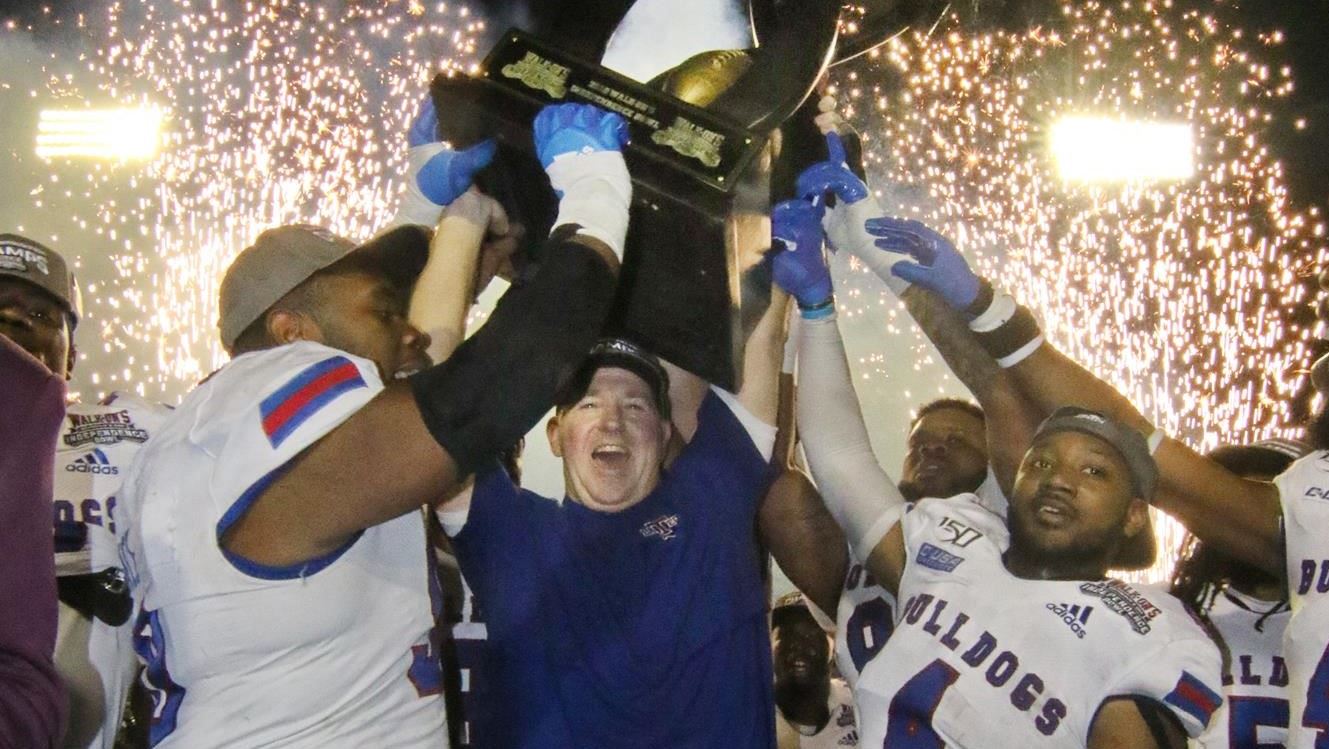 SHREVEPORT, La. – With plenty on the line many people were giving Louisiana Tech little chance of defeating Miami in the Walk-Ons Independence Bowl.

The Bulldogs paid no attention.

The win was the sixth bowl win in six seasons for Louisiana Tech and improved the Bulldogs to 10-3 on the season and gives the program its first 10-win season since moving to the FBS in 1989. It also marked the first 10-win since 1984 when LaTech advanced to the FCS national championship game.

Winning in shutout fashion was also not expected.

The shutout, the first in the history of the Independence Bowl, was the first shutout for Louisiana Tech since defeating New Mexico State 44-0 in 2011. It also marked the first time in the BCS/CFP era (1998) that a non-Power 5 team shutout a Power 5 team in a bowl game.

Miami, on the other hand, was shutout for the first time in 25 years and fell to 6-7 on the season with the loss. The Hurricanes were unable to advance beyond the Tech 35-yard line all night. Miami was held to just 227 yards of total offense in the game.

Offense had carried both teams all season long. But, on this night, it was the defenses of both teams that stood tall. The game featured a combined 18 punts as neither team was able to get untracked offensively. There were seven total sacks in the contest and the two teams combined for nine tackles for loss.

Louisiana Tech finally got on the board when Smith managed to avoid a sack before hitting Israel Tucker, who had gotten away from the Miami defense and was all alone. He raced down the sideline for a 26-yard touchdown with 9:34 to play in the second quarter. It was Tucker’s only reception of the game.

The scoring drive capped a 91-yard drive that took 13 plays. The drive, the most impressive of the night by either team, was helped by the Bulldogs managing to convert on three third-down situations to keep the drive moving.

The Bulldogs had a chance to extend their lead after Darryl Lewis recovered a fumble on the Tech 40-yard line and returned the ball to the Miami 30 on the final play of the third quarter. Tech was unable to take advantage when Smith had a pass intercepted by Gilbert Frierson to end the threat.

Miami had a chance to tie the game moments later. After driving to midfield, but Aaron Roberson picked off a N’Kosi Perry pass with 3:22 left in the game. It was the third turnover of the night by the Hurricanes.

This time the Bulldogs made the most of the opportunity.

They drove 56 yards before scoring on an eight-yard scamper by Smith with 1:15 remaining to put the game away.

Tech’s Justin Henderson was the offensive MVP of the game. He rushed 22 times for 95 yards. Along the way he became the 13th player in Tech history to rush for at least 1,000 yards in a season. Henderson finished the 2019 season with 1,062 yards and 15 touchdowns.

Smith finished the night with 197 yards of total offense. He completed 13 of 28 passes for 163 yards and the one score. Smith ran for 34 yards on 10 carries in the game.

Malik Stanley led the way for the Tech receivers. He caught three passes for 75 yards in the game, while Griffin Hebert and Isaiah Graham each had two receptions. Hebert’s catches went for 26 yards and Graham’s covered 15 yards.

Connor Taylor was voted the game’s top defensive player. He tallied nine tackles on the night, including 1.5 sacks. Teammate Ezekiel Barnett added nine tackles (1.5 sacks) of his own. Trey Baldwin intercepted a pass earlier in the game for the Bulldogs.

Miami managed to gain just 86 yards on the ground against the Bulldogs. Cam’Ron Harris led the way with 31 yards on 12 carries and Jaren Williams finished with six carries for 21 yards. Williams was the top passer on the night for the Hurricanes. He completed nine of 20 passes for 94 yards, while Perry ended the night with 52 yards after completing five of his 13 passes in the game.

K.J. Osborn and Will Mallory combined for nine receptions in the game for Miami. Osborn caught five passes for 56 yards and Malloy had four receptions for 42 yards.

Miami’s defense was led by freshman Sam Brooks who registered a team-high 12 tackles in his first career start. Captain Shaquille Quarterman added 11 tackles of his own in his school record-setting 52nd career start with the Hurricanes.

Louisiana Tech is now 3-1-1 in Independence Bowls in its history and sports an 8-3-1 record in all bowl games. Miami’s loss, the ninth in its last 10 bowls, drops the Hurricanes to 19-22 in all bowl games in the school’s history.