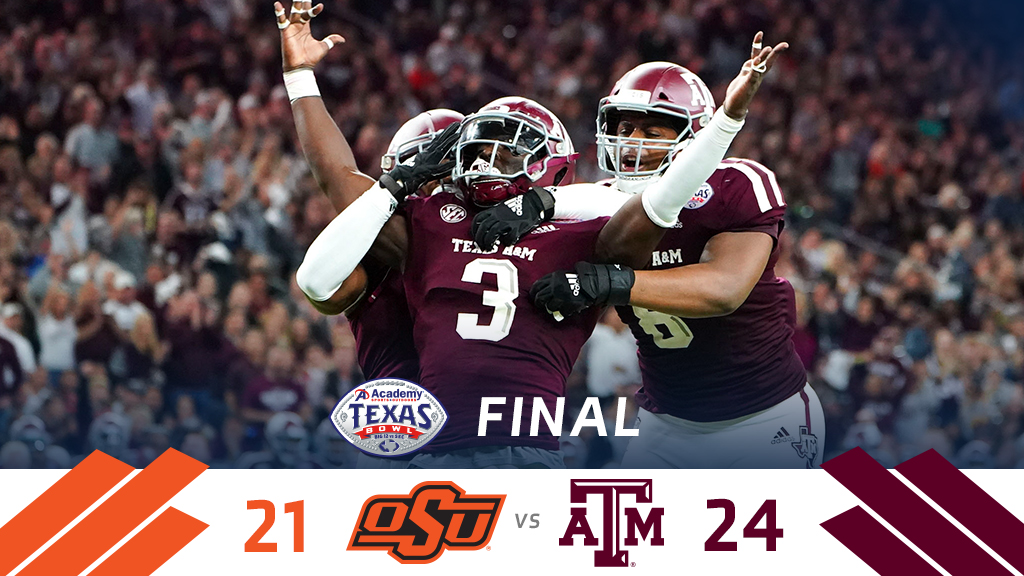 Both Oklahoma State and Texas A&M might have been hearing the famed words of Charles Dickens throughout the night when the two teams met Dec. 27 in the 2019 Texas Bowl.

Oklahoma State experienced the highs of building a 14-0 lead in the first quarter. But it were the Aggies who was having the grandest of times at the end.

The win snapped a two-game losing streak at the end of the season and improved Texas A&M to 8-5 on the season. Oklahoma State finishes the season with the identical 8-5 record.

Mond got the bulk of his rushing yards on one play. One critical play in the fourth quarter.

After taking the snap from center, Mond cut to his right to avoid a pair of Cowboy defenders. It worked and Mond ran away from the rest of the OSU defense, including a diving attempt by Tre Sterling at the 25-yard line, and went in for a 67-yard scoring run. The touchdown, and the ensuing conversion kick by Seth Small, gave TAMU its first lead of the game with 10:45 remaining in the contest.

Small would play a big role a short time later when he connected on a 24-yard field goal that increased the Aggies’ lead to 24-14 with just 2:52 to go in the game.

Small’s field goal capped a nine-play, 59-yard drive that began after A&M’s DeMarvin Leal tackled Spencer Sanders for no gain on a fourth-and-one from the Aggie-34 and giving the ball back to Texas A&M.

A late scoring pass from Dru Brown to Braydon Johnson from five yards out drew OSU to with 24-21 with 1:04 left in the game.

It would not be enough for the Cowboys as the Aggies recovered the onside kick and held on for the win.

The night began in fine fashion for the Cowboys, who scored twice in the first period to take a 14-0 lead at the first break.

Brown passed 42 yards to Johnson to cap a 97-yard yard drive that took just five plays. Matt Ammendola kicked the conversion to put the Pokes in front 6-0 with 7:47 to go in the period.

OSU would extend the lead late in the quarter when Brown scampered nine yards for the score. Ammendola’s kick made it 14-0 in favor the Oklahoma State with 1:33 remaining in the period.

Texas A&M closed the gap in the second period when Isaiah Spiller went in from one yard out and Small kicked the PAT to make it 14-7 in favor of OSU with 5:39 remaining before halftime.

The Cowboys were able to maintain that advantage until Mond hooked up with Jhamon Ausbon for a 10-yard TD pass with 10:32 to go in the third period to tie the game following Small’s successful conversion to add to the comeback rally.

Mond, who fumbled twice in the game, threw for just 35 yards in the first half, but finished the game with 95 yards after completing 13 of his 19 passes. Quartney Davis caught six of those passes for 48 yards, while Spiller also had a nice game running the ball. Spiller finished with 81 yards on 19 carries in the game.

Hubbard finished the season with 2,094 yards to join Barry Sanders as the only Cowboys to surpass the 2,000-yard rushing plateau in school history.

Brown completed 15 of 28 passes for 184 yards for the Cowboys, while Johnson caught five passes for 124 yards and the two scores.