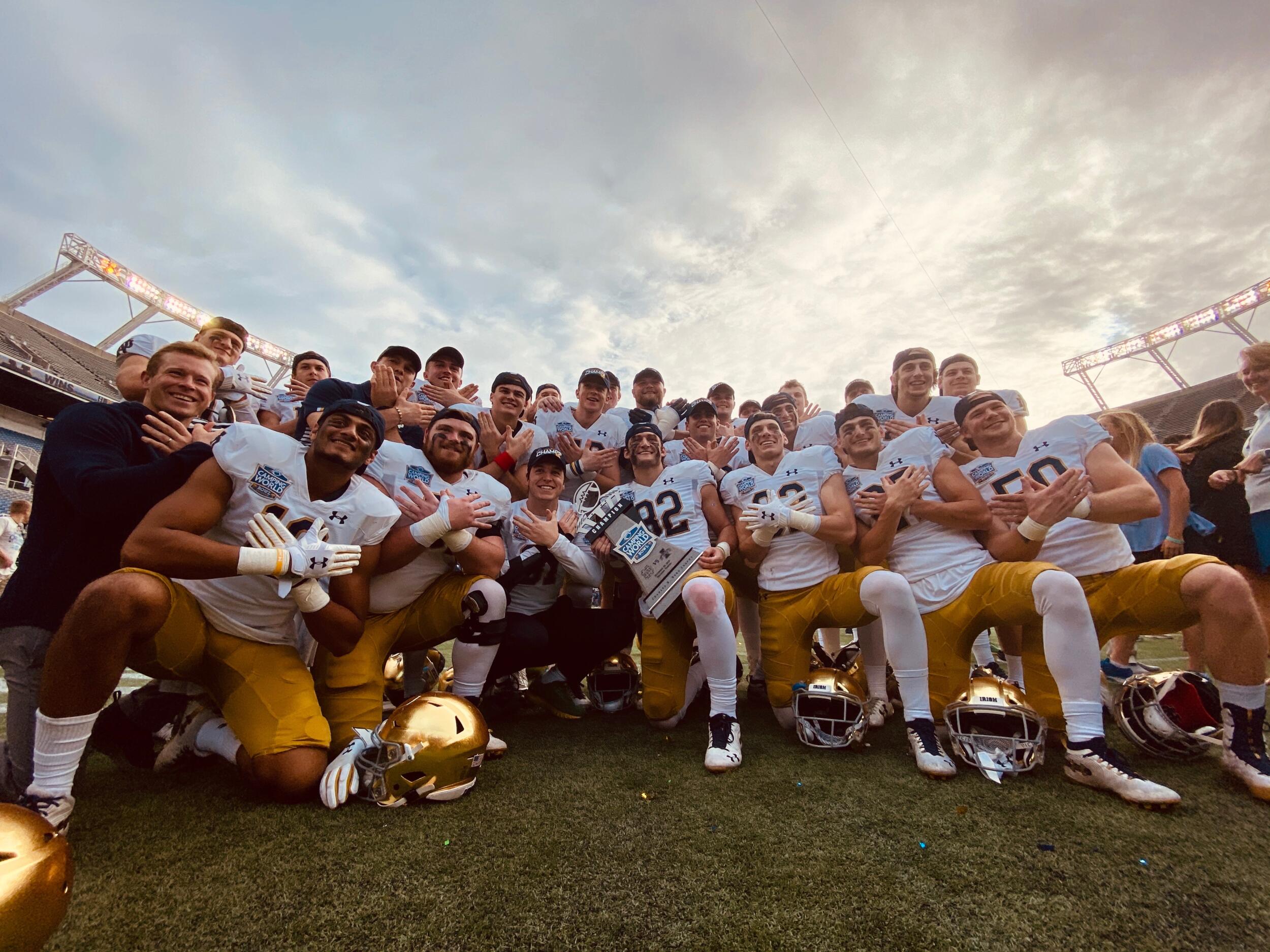 ORLANDO, Fla. – Iowa State had trouble taking care of the football and it didn’t take long for ISU to find their backs against the wall. And doing so against a good team seldom has a favorable outcome.

Notre Dame turned those two early miscues into 10 points that fueled a 33-9 win over the Cyclones on Dec. 28 in the Camping World Bowl in Orlando.

The triumph, the sixth straight for Notre Dame, gave the Irish their first back-to-backs seasons of at least 11 wins since 1988-89. The 24-point margin of victory is the largest margin in a bowl game for Irish with Brian Kelly as coach.

Iowa State finished the season with a 7-6 record.

The game, the first-ever between the two schools, marked the first time the Irish have faced a Big 12 opponent in a bowl game.

Iowa State forced Notre Dame into punting on the first possession of the game. Chase Claypool recovered a Cyclone fumble at the ISU-42 that was caused by Alohi Gilman. Jonathan Doerer kicked a 39-yard field goal a short time later as Notre Dame took advantage of the turnover.

The Irish defense was not done.

Jeremiah Owusu-Koramoah’s strip-sack of Brock Purdy gave Notre Dame the ball at the same spot they took over earlier. Claypool caught a 24-yard pass from Ian Book less than four minutes later as Notre Dame extended its lead to 10-0 with 3:20 remaining in the first quarter.

Iowa State managed to get on the board on a 41-yard field goal by Connor Assalley with 9:27 remaining in the first half before Notre Dame responded with a 51-yard field goal from Doerer that gave the Irish a two-possession lead again with 7:23 to go in the half.

Notre Dame’s Jafar Armstrong one-yard burst with 2:25 left to play in the half increased the Notre Dame lead to 20-3.

A short 25-yard field goal from Assalley cut the deficit to 20-6 at the intermission.

Whatever hopes the Cyclones had of mounting a comeback evaporated in a hurry early in the second half.

Tony Jones’ 84-yard touchdown run with 13:14 to go in the third period put the Irish in front 27-6 and Iowa State managed to get a third field goal from Assalley about nine minutes later for what proved to be the final points of the game for the Cyclones when he connected from 42 yards away.

Notre Dame got two more field goals from Doerer, of 19 and 39 yards, to close out the scoring in the game. The first of those two successful kicks came with just 15 seconds left in the third quarter and the final one came with 3:53 to go in the game,

Book finished the game with 20 completions on 28 passing attempts for 247 yards. Claypool was on the receiving end of seven of those completions and finished with a game-high 146 yards on his way to earning MVP honors in the contest. Jones, whose scoring run was the longest in Camping World Bowl history, finished with 135 yards rushing on just 11 carries.

Owusu-Koramoah led all defensive player with three sacks and a total of four tackles for loss among his nine tackles in the game. Gilman and Jalen Elliott each recorded eight tackles for Notre Dame.

Breece Hall led the Cyclones with 63 yards on 17 carries. But, the rest of the Cyclones managed just 17 additional yards on 10 carries in the game. Purdy, meanwhile, completed 17 of his 30 passes for 222 yards in the game before leaving the game late in the fourth quarter with an apparent ankle injury. His backup Re’al Mitchell completed one of two passes down the stretch for five yards.

Hall, along with La’Michal Petty and Deshaunte Jones, each caught four passes in the game. Pettyway paced that group with 54 yards, while Hall and Jones each had 45 yards on the day.