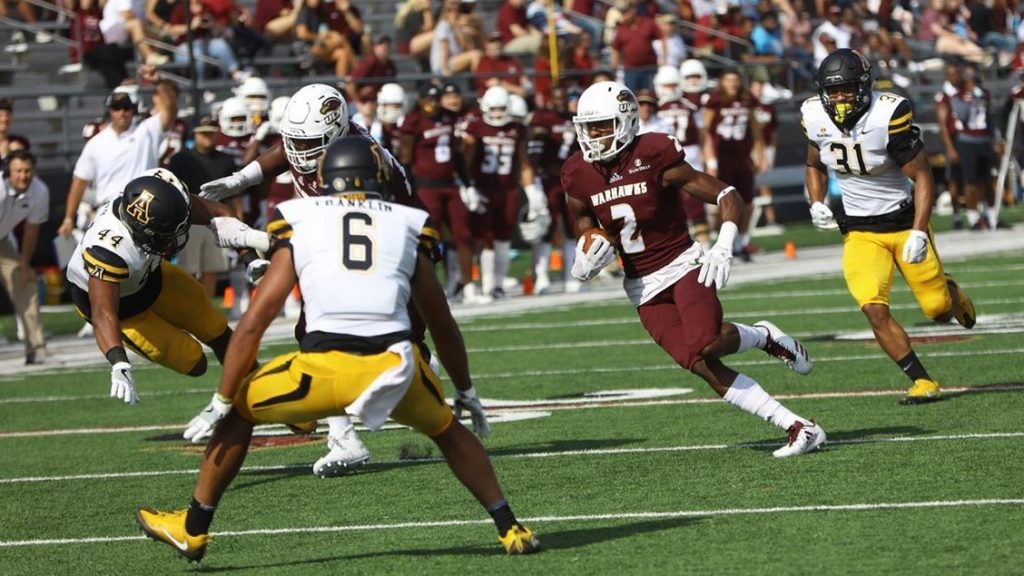 MONROE, La. — Appalachian State has made a habit of poor starts during the 2017 college football season, but an even worse finish sent the Mountaineers tumbling to their costliest loss of the year Saturday as Louisiana-Monroe scored a 52-45 knockout in Sun Belt Conference action.

ULM quarterback Caleb Evans escaped pressure, stepped up in the pocket and fired a 50-yard touchdown strike to RJ Turner with 23 seconds left to lift the Warhawks to lift the their final lead and Taylor Lamb’s desperation, 39-yard pass to Dante Jones on the game’s final play fell incomplete as ASU lost for the first time in five conference contests.

After digging out from the midst of a 21-3 deficit in the second quarter, App State (5-4 overall, 4-1 in league) stormed back for leads of 31-28 and 38-35 in the second half, but the Mountaineer defense couldn’t hold off the Warhawks’ potent attack in the fourth period.

It looked like Appalachian might be headed to overtime for the second week in a row when quarterback Taylor Lamb directed his nine-play, 43-yard march for the tying score with just 53 ticks remaining on the clock.

Ike Lewis started the drive with a sizzling 49-yard kickoff return and ended it by hauling in Lamb’s perfectly-timed, feathery pass in the back corner of the end zone for 20 yards to knot the score.

But that was too much time for the passing of Evans (24-of-34 passing for 356 yards and three TDs passing, nine carries for 47 yards and two scores rushing) against the tiring ASU defense.

It took only two plays for the Redhawks to reach midfield and Evans scrambled away from pressure and found Turner behind cornerback Tae Hayes in the Mountaineer secondary. Turner grabbed this aerial at the ASU 22 and broke Hayes’ tackling attempt at the 15. One cutback later, Turner was running free for the winning touchdown.

Appalachian looked like it might get a reprieve when a flag was thrown against ULM on the score when Turner went out of bounds before the catch, but the penalty for illegal touching was waved off when it was established that Hayes had forced Turner off the field.

With little time left, Lewis took a backwards pitch from Caleb Spurlin off a squibbed kickoff and raced 27 yards to the Appalachian 45 before Lamb completed passes of 11 yards to T.J. Watkins and five yards to Lewis to give the Mountaineers one final chance with three seconds to play.

With triple receivers lined up against the defense and streaking down the right side, Lamb aired the ball out to the back of the end zone, where Jones got his hands on it for a moment before it was stripped away to conclude ULM’s upset.

ULM had dropped three consecutive Sun Belt games before pulling off its biggest win since Matt Viator moved from McNeese State to take over the Warhawk program following the 2015 season.

ASU faces Georgia State on Nov. 25 in what used to be the 1996 Summer Olympics stadium and the Atlanta Braves’ Turner Field and will feature the first meeting on opposite sidelines of two of the three captains of the 1995 Southern Conference championship and undefeated regular-season Mountaineer team, App State’s Scott Satterfield and Georgia State’s Elliot.

In between that important contest, Appalachian will host winless arch-rival Georgia Southern on Thursday at 7:30 p.m. in a nationally televised game on ESPNU and will close the regular season at home against Louisiana-Lafayette on Dec. 2.

In another showdown game on Dec. 2, Troy travels to Arkansas State for a contest with championship implications.

Appalachian lost control of its own destiny with another mediocre performance on Saturday, losing two games in a row for the first time since it complied four consecutive defeats in its initial Sun Belt campaign in 2014. The 52 points allowed by the Mountaineers were the most they had given up since a 55-48 overtime loss at home to Liberty in 2014, while in the midst of that four-game losing skid.

ASU had breakdowns in all aspects of the game in the first half, allowing the Warhawks to score on a 21-yard TD connection between Evans and Turner to cap a 66-yard drive on ULM’s second possession, on Evans’ 33-yard laser to Marcus Green, one play after a fumble by freshman tailback Daetrich Harrington and on Marcus Green’s 95-yard kickoff return as Louisiana-Monroe built that 21-3 edge.

But the Mountaineers rallied behind the play of Lamb, tailback Jalin Moore and Lewis.

Lamb (20-of-29 passing) scorched the ULM secondary for 339 yards, four touchdowns and 360 yards of total offense, with Lewis catching a game-high seven passes for 87 yards and two TDs. Lewis finished with 196 all-purpose yards.

Moore returned to form from injury to rush 21 times for 114 yards and two touchdowns and added another score on a brilliant 75-yard catch and run that pulled Appalachian within 28-24 at halftime.

But for the second week in a row, the Mountaineers fell one play short in a loss.