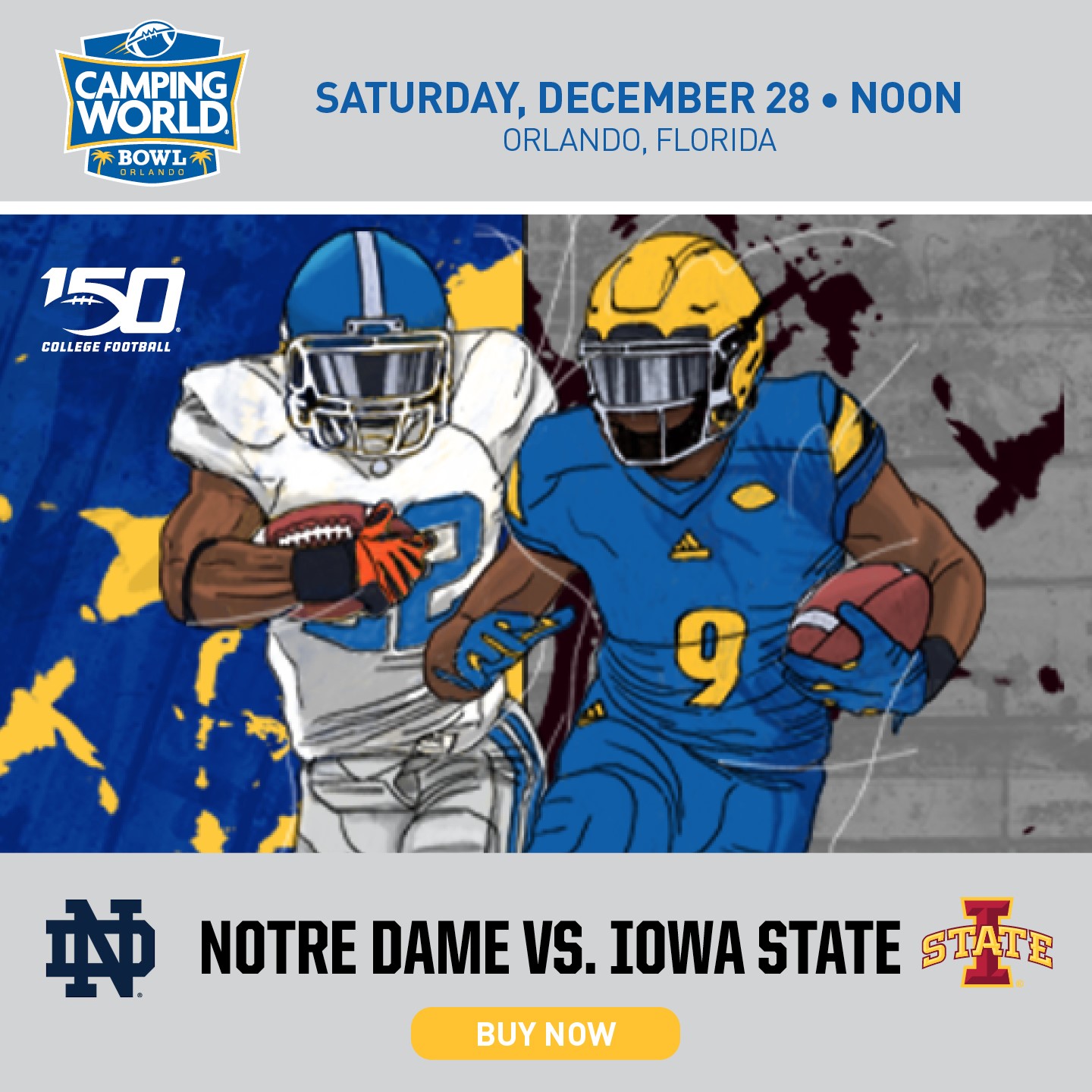 This bowl has had just as many names over the years as Sybil had personalities. Through the years it has been the Blockbuster Bowl, the Carquest Bowl, MicronPC Bowl and Tangerine Bowl. And let’s not forget Champs Sports Bowl and Russell Athletic Bowl before taking on the current moniker in 2017 when Oklahoma State defeated Virginia Tech 30-21.

Bowl History: This year’s Camping World Bowl features a pair of teams with bowl resumes on opposite sides of the spectrum with Iowa State appearing in a bowl for just the 15th time in school history. The Cyclones, who can boast of a coaching tree that includes legendary coaches Johnny Majors and Earle Bruce, have won just four of the previous 14 bowl games in school history. The first bowl came in 1971 when the Majors-led Cyclones dropped a 33-15 decision to LSU in the Sun Bowl. The Cyclones did not win a bowl for the first time until the Insight.com Bowl when they downed Pittsburgh 37-29.

Coach: Matt Campbell is doing a marvelous job of resurrecting an ISU program that had hit a low point prior to his arrival. The Cyclones are 1-1 in bowl games under Campbell. They defeated Memphis 21-20 in the 2017 Liberty Bowl and dropped a narrow 26-24 score to Washington State in last year’s Alamo Bowl.

Campbell was the head coach at Toledo prior to taking over at Iowa State prior to the 2016 season. He was 35-15 in his time with the Rockets. At ISU, he guided the Cyclones to back-to-back eight win seasons in 2017-18, including an impressive win last year at home against No. 6 West Virginia that ended the Mountaineers hopes of a national championship.

2019 Season: A quick glance at ISU’s 7-5 record might indicate a rather ho-hum season on the barren plains of Iowa. The 2019 season has been anything but that for Campbell and the Cyclones. The five losses have come by a combined 20 points, including an 18-17 loss to in-state rival Iowa and a 23-21 setback on the road at Baylor. Oklahoma, which is in the hunt of the national championship, escaped Ames with a 42-41 win in early November when ISU opted to go for the win instead of a tie to force overtime. Four of those losses came in Big 12 play where the Cyclones, and nearly every other team in the conference, tied for third with a 5-4 record.

The bottom line: Iowa State is no slouch.

2019 Cyclones: Campbell’s offense is centered around the passing attack where the Cyclones are averaging 318.3 yards per game this season. They are adding just 140.3 yards on the ground.

The ISU defense has been playing tough for most of the season. Opponents are averaging just 133.8 yards rushing against the Cyclones and 228.3 yards through the air.

Key Players: Brock Purdy has been Mr. Reliable for the Cyclones through his first two seasons in Ames. The 6-1, 210 sophomore quarterback has completed 295 of 445 passes this season for 3,760 yards and 27 touchdowns. He has thrown just nine interceptions. Purdy has also rushed for 265 yards on 86 carries (3.1 ypc) and eight TDs. His rushing total ranks him second on the team as does his touchdown total on the year.

The receiving corps is a dandy and offers Purdy a multitude of options to go to. Deshaunte Jones (5-10, 180) leads the way with a team-high 72 receptions for 832 yards and a pair of scores, while talented Tarique Milton (5-11, 183) had added 33 catches for 689 yards and three TDs. A third wide receiver, La’Michael Pettway (6-2, 223) had 622 yards after catching 51 passes heading into the bowl game. Six of his catches have resulted in scores for the Cyclones.

If those three are not enough to cause opposing teams fits in preparation, through in Charlie Kolar (6-6, 252), one of the top tight ends in the country this season. He has caught 48 passes for 675 yards and seven touchdowns.

The Iowa State defense is led by a foursome of players who are seemingly always around the football. Linebackers Marcel Spears (6-1, 218) and Mike Rose (6-3, 240) have made a habit of finding themselves in the backfield. Spears, who has a team-high 85 (54 solo) tackles, has recorded eight tackles for loss on the year, while Rose has added 8.5 TFLs as part of his 69 (34 solo) tackles in 2019. O’Rien Vance (6-1, 231) gives Campbell and the Cyclones a third linebacker that has proven himself more than formidable this season. Vance has 61 (32 solo) tackles and his a team-high nine tackles for loss.

Bowl History: Many images are conjured up whenever thinking of football at Notre Dame.

Except when it comes to bowl games. A veteran of 37 previous bowl games, the Irish have come away victorious less than half the time in those contests. Notre Dame carries a 17-19 bowl record into Saturday’s game against the Cyclones.

Notre Dame’s first bowl appearance come on Jan. 1, 1925 when the Fighting Irish defeated Stanford 27-10. They would not return to a bowl game for more than 40 years before losing to top-ranked Texas 21-17 in the Cotton Bowl following the 1969 season. The Irish avenged that loss the following year when they defeated the Longhorns 24-11.

2019 Season: If not for a fateful day in Ann Arbor, Notre Dame could very well be playing for a national championship this season. Michigan made certain the Irish would not be so fortunate. The Wolverines embarrassed the Fighting Irish 45-14 on Oct. 26 to deflate any title hopes. It was the second loss of the season after having lost at Georgia 23-17 on Sept. 21.

The bulk of the offense comes via the pass where Notre Dame is averaging 252.2 yards per game and 176.6 per game on the ground.

The defense in steady and is allowing just over 160 yards rushing or passing the ball. Opponents are gaining 160.6 yards per game on the ground against the Irish and 163.7 yards through the air.

Jones is helped when going to the air by the presence of veterans Chase Claypool (6-4, 229) and Chris Finke (5-9, 184). Those two wide receivers have combined for 94 receptions and over 1,300 yards. Claypool, a senior, leads the way with 59 catches for 891 yards and 12 touchdowns, while Finke, a graduate student, has 35 receptions for 410 yards and four touchdowns on the year. Junior tight end Cole Kmet (6-5, 25) also gives Book a big target who has hauled in 41 passes already this season for 482 yards and six scores.

Notre Dame has a trio of linebackers who have tallied the top three tackle totals this season for the Irish. Drew White (6-0, 230), Asmar Bilal (6-2, 227) and Jeremiah Owusu-Koramoah (6-1, 216) are all within four tackles for the team lead. White, a senior, has recorded 75 (45 solo) tackles already this season, including eight TFLs and a pair of sacks. He has also recovered a pair of fumbles. Bilal has chipped in with 72 (44 solo) tackles, including nine for loss, while Owusu-Koramoah is right behind with 71 (47 solo) stops of his own. Bilal is a graduate student and in his final year of eligibility while White and Owusu-Koramoah are juniors.

Ray: This game just might be football’s version of David versus Goliath. Notre Dame, with its rich history of success on the gridiron figures to be the favorite to emerge victorious. Iowa State, on the other hand, has had little to relish over the years. Sometimes, when a team has nothing to lose, like the Cyclones in this case, good things happen.

Okay, okay, I am stalling here. My mind wants to predict Notre Dame, but my heart wants to say Iowa State. So, after looking at all the cards and a thorough reading of the tea leaves and a flip or two of the coin: Notre Dame 31, Iowa State 30