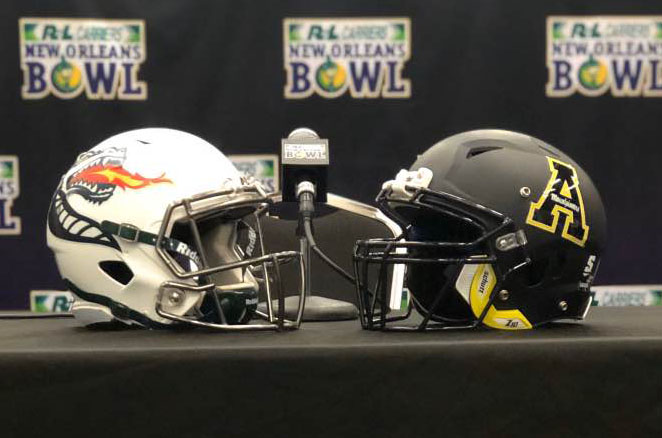 Maybe it’s the black and gold, or maybe it’s the face that both of them are conference champions, but Bourbon Street loves their New Orleans Saints and also seem to have a soft spot for the Appalachian State Mountaineers as well.

For the second year in a row, Appalachian State finds themselves in New Orleans for the New Orleans Bowl. Last year they walloped Middle Tennessee 45-13 in front of 23,492 fans and have gone 12-1 since, beating bowl-bound Charlotte and upsetting North Carolina and South Carolina along the way.

RB Darrynton Evans has 23 total TDs (17 rushing, five receiving, one via a kickoff return), one away from the Sun Belt record and second in App State history behind the 31 from RB Kevin Richardson in a 14-1 FCS title season in 2006.

On defense, LB Akeem Davis-Gaither has 95 tackles, including a career-high 16 against Georgia Southern, Appalachian’s only loss on the season. He intercepted a second-half pass and blocked a game-ending field goal in the 34-31 win against North Carolina, had 2.5 tackles for loss among his 11 stops at Louisiana-Lafayette on Oct. 9th, and had 2.5 tackles for loss with one sack, two PBUs and a forced holding penalty on the game’s final play in the victory at South Carolina.

UAB is playing in their third-consecutive bowl game since returning to action in 2017 after an ill-fated attempt to pull the plug on their program. The Blazers are looking for back-to-back bowl victories for the first time ever after winning the program’s first bowl game last year with a 37-13 victory over NIU in the Cheribundi Boca Raton Bowl.

This task might be more of a challenge than last year’s win over NIU, however. Appalachian State is the first nationally-ranked opponent UAB has faced since restarting football.

UAB got here because of a three-game stretch that allowed them to win C-USA West with wins over UTEP, Louisiana Tech and North Texas, though they fell 49-6 to Florida Atlantic in the championship game.

The UAB defense has been the catalyst for the Blazers’ success this season. The Blazers finished the regular season ranked No. 5 nationally in total defense, and enters the bowl game at No. 9 overall following the C-USA championship game.

UAB WR Austin Watkins Jr. enters the contest with 47 catches for 933 yards and five touchdowns. He needs 67 yards to eclipse 1,000 for the season, and if he can do so he would be just the third player in program history to accomplish that feat.

Chuck: Appalachian State was a whisker away from an undefeated season, but just like Boise State they have a legitimate beef as to not qualifying for a better bowl, thanks to bowl tie-ins. Their fans will have to settle for pounding a hopelessly overmatched G5 opponent. Appalachian State 56, UAB 9