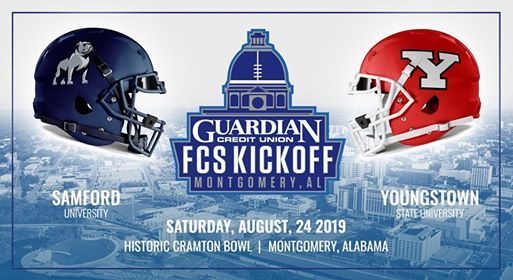 After appearing in the FCS Championship game following the 2016 season, Youngstown State has had two subpar seasons. The last two down years, including a loss against non-scholarship Butler have called into question the job security of Coach Bo Pelini. Another down year for the Penguins could have them conducting a coaching search after the season. The non conference schedule for the Penguins could find them at 4-0 heading into conference play. Youngstown always runs the ball well they will need to do so again in 2019. The Penguins should also be solid on defense. Whether that’s enough to get to 8-4 will be determined is short order.

Player to watch: Quarterback Nathan Mays looks to be the starter after having his 2018 season cut short by injury. If Mays can take control of the offense early, the Penguins have a shot at a good season. If he struggles and forces Bo Pelini to search for the right guy, the Penguins could fall out of the race before it even begins.

Its hard to replace a Walter Payton Award winner like Samford has to do with Devlin Hodges. Hodges finished his career at Samford by breaking Steve McNairs 24 year old passing record. A large part of that success was wide receiver Kelvin McKnight. Unfortunately for the Bulldogs, McKnight has also graduated. The graduation of stud players wasn’t limited to the Samford offense. Defensive end Ahmad Gooden has moved on and is in camp with the Broncos. Due to the losses of so many skill players this looks to be a rebuilding year for Samford. The Southern Conference as a whole is stronger around the Bulldogs, so this could be a long season.

Player to Watch: DL Nelson Jordan played excellent in his freshman year. Jordan amassed 33 tackles and five sacks. With the top two players from the Bulldog defense having departed, the team will lean on young players like Jordan to keep the program heading in the right direction

Ben: Youngstown State might have down years, but is never really out of any competition. Without Devlin Hodges the offense of Samford will take a step back in productivity. Youngstown State 24, Samford 17

Jamie: If this game was played two years ago, it would have been a marquee matchup. Unfortunately that is not what we have today. We have a rebuilding Samford and a Youngstown team in a bit of flux. The Penguins do look to be the better team, so they take the win here. Youngstown State 21, Samford 13

Kent: The Penguins had a home out-of-conference loss to Butler last year but won’t let that happen this year against the Devlin Hodges-less Bulldogs. Youngstown State 23, Samford 20

Preston: Youngstown State’s defense wins out in a 10 point victory for the Penguins. It’ll be close a halftime but Youngstown pulls away and puts the clamp down in the 3rd.