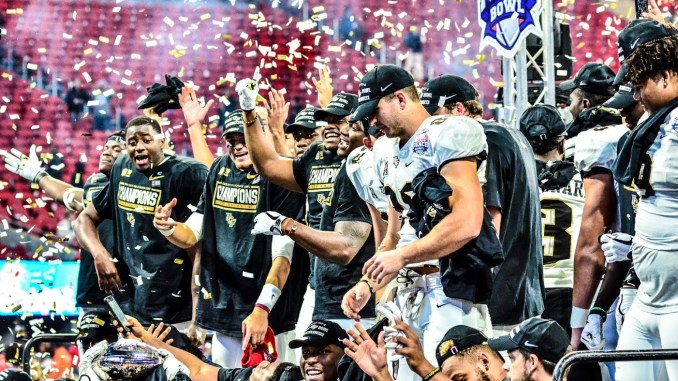 College Sports Journal announces their 2018 Fearless Prediction for the Order of finish of the American Athletic Conference (AAC), the fifth and final of our Group of Five Conference previews.

The American Athletic Conference is the top Group of 5 league currently and with the talent back, that likely will stay that way through this season.

UCF was the lone undefeated team not only in the Group of Five but also all of Division I football last year. And even though the Knights lost Scott Frost as their coach, new headman Josh Heupel has the tool to retain a high level.

UCF will face some contention from rival South Florida and possibly Temple in the East Division but the odds are high that UCF will again with the division.

In the West Division, Memphis was the winner last year and actually gave UCF its toughest game. The Tigers return much of the team last year and are the favorites in this division. Memphis looks like its toughest competition will come from Houston and Navy.

In the title game for the AAC, it will be a rematch in our projections and UCF will defeat the Tigers again.